Even though players can use Kokomi as a damage dealer in Genshin Impact, it is recommended that they use her as a supporting unit as she has healing abilities.

Genshin Impact is a popular role-playing, open world video game set in the fantasy world of Teyvat. It is home to seven unique nations. It is important to note that each nation is tied to a different element and is ruled by a different god.

The Traveller now travels with their companion, Paimon, in search of their lost sibling, but soon becomes involved in the affairs of Teyvat’s nations. Genshin Impact allows players to control one of four interchangeable characters in a party.

However, switching between characters can be done very quickly during combat. This allows the players to use several different combinations of attacks and skills.

It is important to note that players can strengthen their characters in various ways, such as increasing their level. Additionally, they can improve the weapons and artifacts that the character equips. Players use their companions not only to explore the world, but they can attempt various challenges for rewards.

All across Teyvat are challenges and bosses that reward valuable resources, such as Electro Hypostasis and Stormterror.

However, claiming these rewards uses a currency called resin, which regenerates over time. Completing the challenges and defeating the bosses grants players progress towards their Adventure Rank.

Players will then be able to unlock new challenges and quests as they increase the World Level. The World Level is a measurement of how strong the monsters and enemies within the world are. Additionally, it refers to the rarity of rewards that defeating them gives.

The game consists of 24 playable characters, however, this does not mean that players will obtain all 24. This is because Genshin Impact is a gacha-based video game, and it locks its best characters behind the gacha mechanics.

As mentioned above, players can control one of four interchangeable characters in a party. One of the characters players can use in their party is Sangonomiya Kokomi. She is a young Divine Priestess of Watatsumi Island and a descendent of the Sangonomiya Clan.

Kokomi is in control of most of Watasumi’s affairs. She hopes to give the people of Watatsumi Island the happiness and hopes that they desire. It is believed that this five-star character shares many similarities with Barbara, however, there could be room for Kokomi to be more than a healer.

With regard to Kokomi’s abilities, she may surprise people with her elemental skill damage. It is important to note that this skill is based on her maximum health. Some players believe that Kokomi’s healing abilities can be crucial to any party.

It is believed that the best catalyst for Kokomi is the Prototype Amber. However, paying players can use the Everlasting Moonglow. The following table indicates the name and a description of each weapon:

It is recommended that players pair Prototype Amber with the four-piece Tenacity of the Millelith artifact set. This will turn Kokomi into a powerful, healing machine.

As mentioned above, Kokomi’s elemental skills scales with her maximum health, and that is taken further with the two-piece effect. It buffs her health by 20 percent. 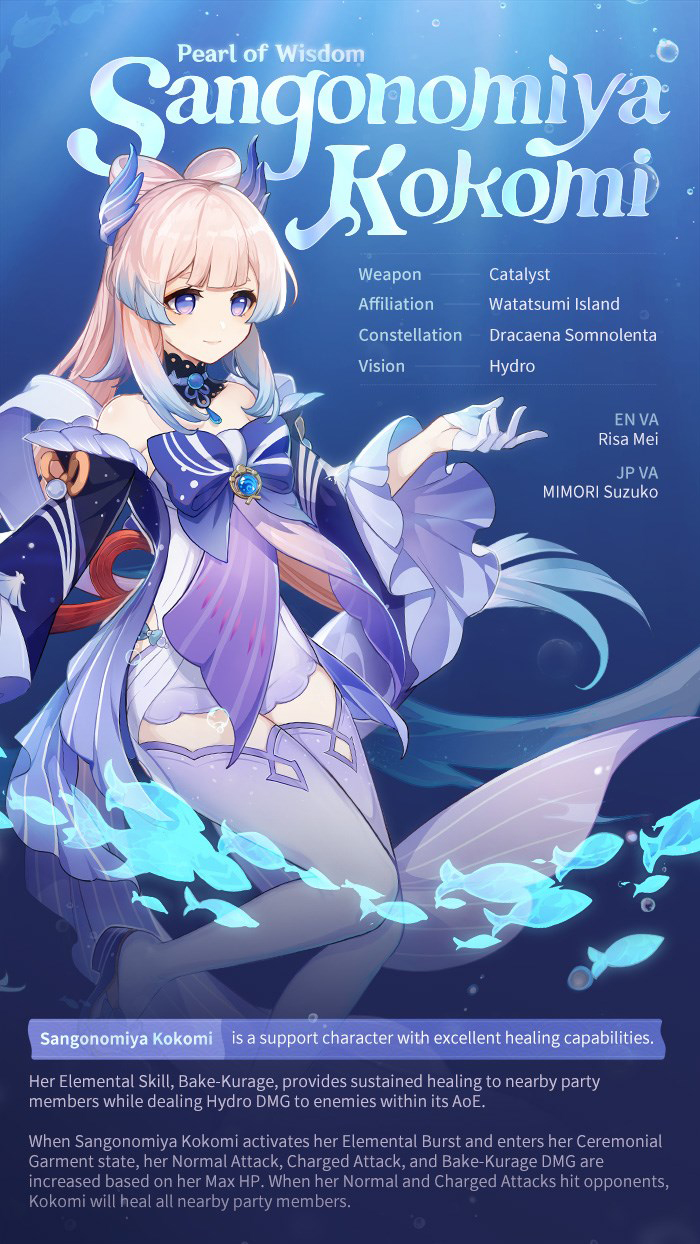 While the four-piece effect ties in with her elemental skills, as it increases the attack of all nearby allies by 20 percent, it is important to note that this effect can be triggered once every half a second, and it even occurs when Kokomi is not on the battlefield.

Players should note that it would not be difficult to get the most out of these effects, as they synergize perfectly with Kokomi’s game play. However, players should activate her elemental skill, or burst, and immediately switch to a damage dealer.

Genshin Impact currently features 24 distinct characters for players to unlock. However, this does not mean that they will unlock all of them.

One of the characters players can obtain is Kokomi. Even though they can use her as a damage dealer, she is recommended as a supporting unit.

Players can use her in a team with Raiden Shogun, Kazuha or Sucrose and Sara. It is believed that they will have an easier time in Genshin Impact if they use this team in battles.