In ROX, players are able to become a Falcon Hunter, however, this might take some time to perfect, as the build depends on high Luck and Intelligence statistics.

Ragnarok X: Next Generation (ROX) is a very popular adaption of the classic, Ragnarok Online massive multiplayer online role-playing game (MMORPG). ROX invites players to relive their days in the land of Midgard, along with their friends. It is important to note that ROX is a mobile game and not a personal computer (PC) game like Ragnarok Online.

The game brings back all of the parts of Ragnarok Online that players once loved, including familiar cities, cute monsters and the original classes. However, ROX introduces modern graphics along with three dimensional (3D), that players would not experience in the classic version. From Lunatics and Porings roaming the fields outside to Prontera, to the zombies of Payon Dungeon, nothing is different. However, everything else has changed.

If players first start playing ROX, they will need to create their own digital characters. These characters can be customized by equipping them with accessories, gear and costumes. Each item provides the character with specific statistics. It is thus important that players equip their character with the correct gear.

When creating a character, players have a choice of six different first job classes. First jobs include an Archer, Swordman, Mage, Merchant, Thief and Acolyte. When players reach a specific level, they will be able to choose a second job, depending on their first job.

An Archer can either become a Hunter, Bard or Dancer. An Acolytes becomes a Priest. A Swordsman will become a Knight, while a Mage becomes a Wizard, a Thief becomes an Assassin. However, when players reach a certain level in the second job, they will be able to become one of the following: Whitesmith, Assassin Cross, High Priest, Sniper, Lord Knight, and High Wizard.

The following table indicates the end-game job name as well as a short description:

It is important to note that this build may take some time to get right as it relies on the Luck statistic to attack. In order to know which statistics to allocate, players need to look at the Falconry Master skill. This skill allows players to use the Falcon Attack. The description states that a Normal Attack has a chance to trigger a Falcon Attack. 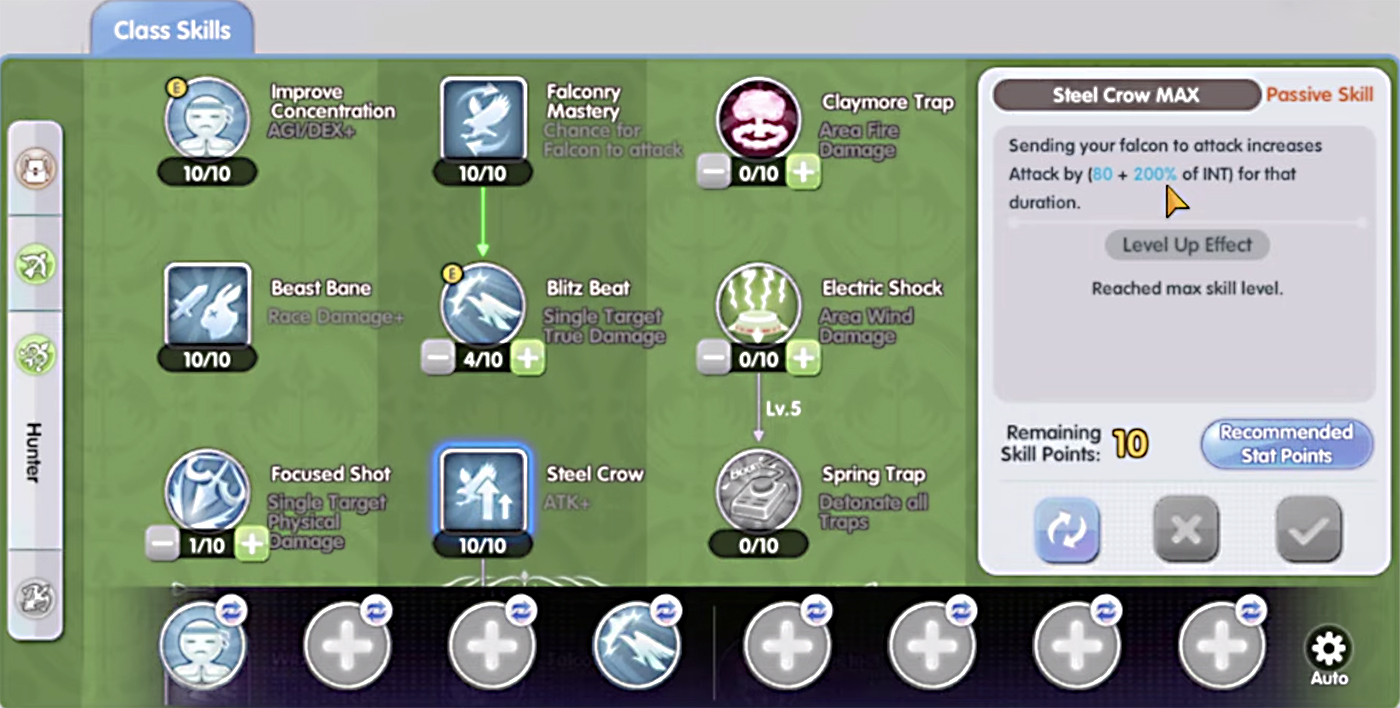 At maximum level, the Steel Crow skill increase the characters attack by sending a Falcon. It does 80 percent damage with an additional 200 percent Intelligent damage. It is important to note that this skill’s damage scales off from INT. This means that this build highly depends on the INT and Luck (LUK) statistics.

It is advised that players allocate some points into DEX for attack and skill cooldown reduction. As mentioned above, players need to allocate a lot of points in to INT and LUC. INT is essential for how much damage the Falcon does, while LUK is essential for the chance that the Falcon attacks.

The accessories in this build are crucial. It is recommended that players equip Blue Grade accessories in order to obtain more INT. Players should look for earrings and Talisman that provide the character with even more INT. However, players can use the Ancient Flower Ring and Elegant Incense to obtain attack speed.

The weapon is not as important as the accessories. However, players can equip a Blue weapon for more attack speed. With regard to the armour, players should aim for the Valkyrie set to obtain more survivability. It is advised that players look at which statistics they are lacking, and then equip gear to obtain that stat.

It is recommended that players allocate points into the following Passive, and Active, skills: