Players are able to obtain more Champions through the Fusion process in Raid: Shadow of Legends, however, it is a very time-consuming activity.

Raid: Shadow Legends is a popular turn-based, fantasy-themed mobile game. It takes place in the fictional world of Teleria, which has been colonized by the Dark Lord, Siroth. The game features various adventures for players to take part in.

There are currently four types of Affinities in the game, and players will need to have knowledge of all of them to be successful. Three of them exist in balance with one another, but the fourth offers no particular disadvantages or advantages over the others.

If the players understand all the Affinities, they are able to assemble an army of Champions for battles in deserts, temples, dungeons and castles defended by enemies.

When players first start playing the game, they will have to play a tutorial mission to learn the gameplay and mechanics. After the tutorial, players can choose their first Champion.

It is important to note that there are four types of Champions: Defence, Health Point, Support and Attack. Players should thus choose their first Champion wisely.

Players are able to collect more Champions by using Shards, which contain the souls of ancient warriors. Once the players have obtained the required Shards, they can summon a warrior at the in-game Portal. It is important to note that there are four different Shards, and each summons a different type of Champion.

Players are also able to obtain additional Champions through Fusion. This allows them to get a new Champion by fusing several Champions together. It is important to note that Champion Fusion can only be performed at the in-game Portal.

How to perform a Fusion

In order to perform a Fusion, players need to travel to the in-game Summoning Portal. On the right side of the menu, players will discover a Fusion option. After selecting the Fusion option, a new menu will appear. In the new menu, players can see which Champion they are able to fuse. 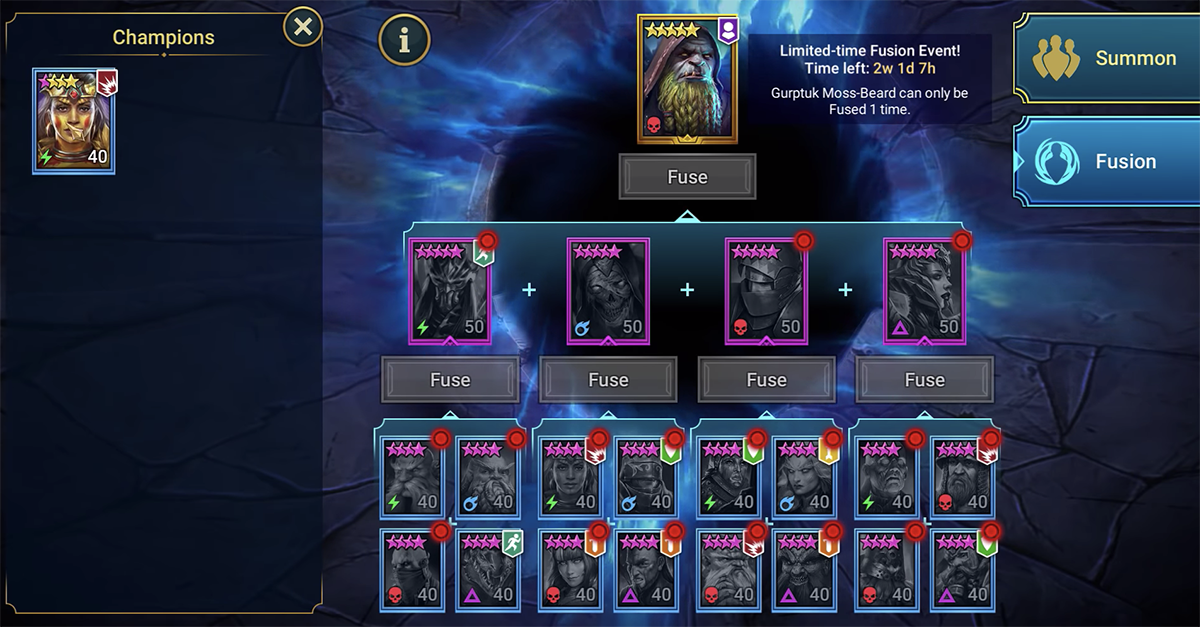 Raid: Shadow Legends players should be aware that each Champion can only be obtained by fusing the required Champions. This means that players need to collect and level up specific Champions in order to obtain a new Champion through fusion.

Players need to select the Champion to open the Champion selection window. However, if players have several Champions that meet the requirements for the Fusion, they can choose any of them by selecting the avatar.

Once players have selected the required Champions, they can select the fuse button. The fuse button will unlock a new Champion. It is important to note that Champion Fusion works like a development tree. Players thus need to fuse four low level Champions to get a stronger one.

It is clear that the Fusion process can be very time consuming. Players will only able to obtain the best Champion once they fused the four stronger Champions.

Raid: Shadow Legends players should remember that they are only able to fuse Champions that have a specific rank. The rank depends on the rarity of the Champion players are trying to summon. Additionally, the Champions must also have reached the maximum Ascension level.