The Wizards in ROX are amongst the most powerful job classes, however, players need to allocate a lot of points into INT to deal massive magic damage.

Ragnarok X: Next Generation (ROX) is a popular adaption of the classic, Ragnarok Online massive multiplayer online role-playing game (MMORPG) that is developed and published by Gravity. ROX invites players to relive their days in the land of Midgard, along with their friends.

The game brings back all of the parts of Ragnarok Online that players loved, including the charming monsters, familiar cities and the original classes. However, it recreates it inch-by-inch with modern graphics along with three dimensional (3D) viewing, which allows players to admire the world. From Lunatics and Poring’s roaming the fields outside to Prontera, and to the zombies of Payon Dungeon, nothing is different. However, everything else has changed.

The game offers players a variety of activities to do and multiple quests to complete. Players are able to participate in different events, tame monsters to become a pet, complete board missions, join guilds, go fishing, cook, do gardening, and participate in the carnival feature.

Before players can enter the world of Midgard, they need to create their own digital characters. These characters can be customized by equipping them with gear, costumes and accessories. It is important that players constantly upgrade their character’s gear, as the games content will get more difficult as players level up.

When creating an avatar, players have a choice of six different jobs, such as an Assassin Cross, Sniper, Lord Knight, High Wizard, High Priest and a Whitesmith. The following table indicates the job type, as well as a short description of the job.

It is recommended that players distribute most of their available statistics points into intelligence (INT). Intelligence affects the mental power of the character. This allows the player to deal magic damage even if no weapons are equipped. However, this only applies if a sufficient amount of INT is invested.

Every point of INT has the following effect on the character:

It is important to note that the more points players distribute into INT, the more benefits they will receive. Every two points of INT provides the player with one percent increase in SP recovery rate. However, when the INT reaches 120, it will increase the SP recovery rate with up to five percent. 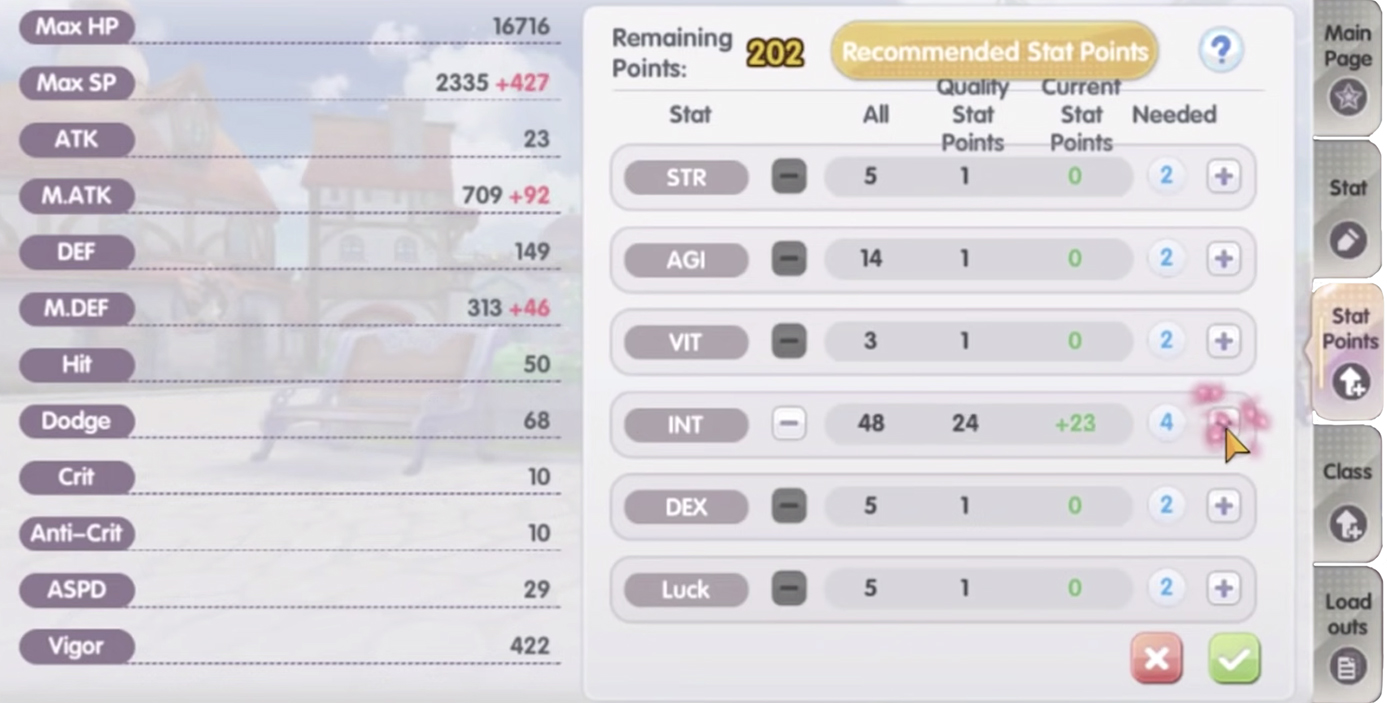 Additionally, players can distribute some points into dexterity (DEX). This statistic features an increase in Vigour. This will reduce the Wizard’s skill cooldown, which allows players to use skills and abilities more frequent.

It is advised that players first look at what benefits their equipment provides before distributing points into the DEX statistic. The equipment can reduce the player’s skill cool down, so it may not be necessary to distribute points into DEX.

Before allocating skill points, players need to consider what type of wizard they want to build. Players can choose between an Ice Wizard, Fire Wizard, Lightning Wizard, Earth Wizard and Ghost Wizard. Even though players can choose a Wizard build, there are certain skills each Wizard must have.

In early game, players only have one area-of-affect damage skill called Fireball. However, it is recommended that players do not unlock this skill as it has a long cool down. Instead, players need to allocate points into the Soul Strike and Magic Crusher skills. As players progress in the game, it is advised that they allocate points in the Fire Ball area-of-effect (AoE) skill. This will allow players to use the Fire Wall skill.

When players reach the second job skills, they will be able to obtain more AoE based skills. It is recommended that players allocate points to the Storm Gust and Lord of Vermillion skills. However, players may need to allocate points into other skills to unlock the recommended skills. Additionally, players can slot the Soul Drain skill. 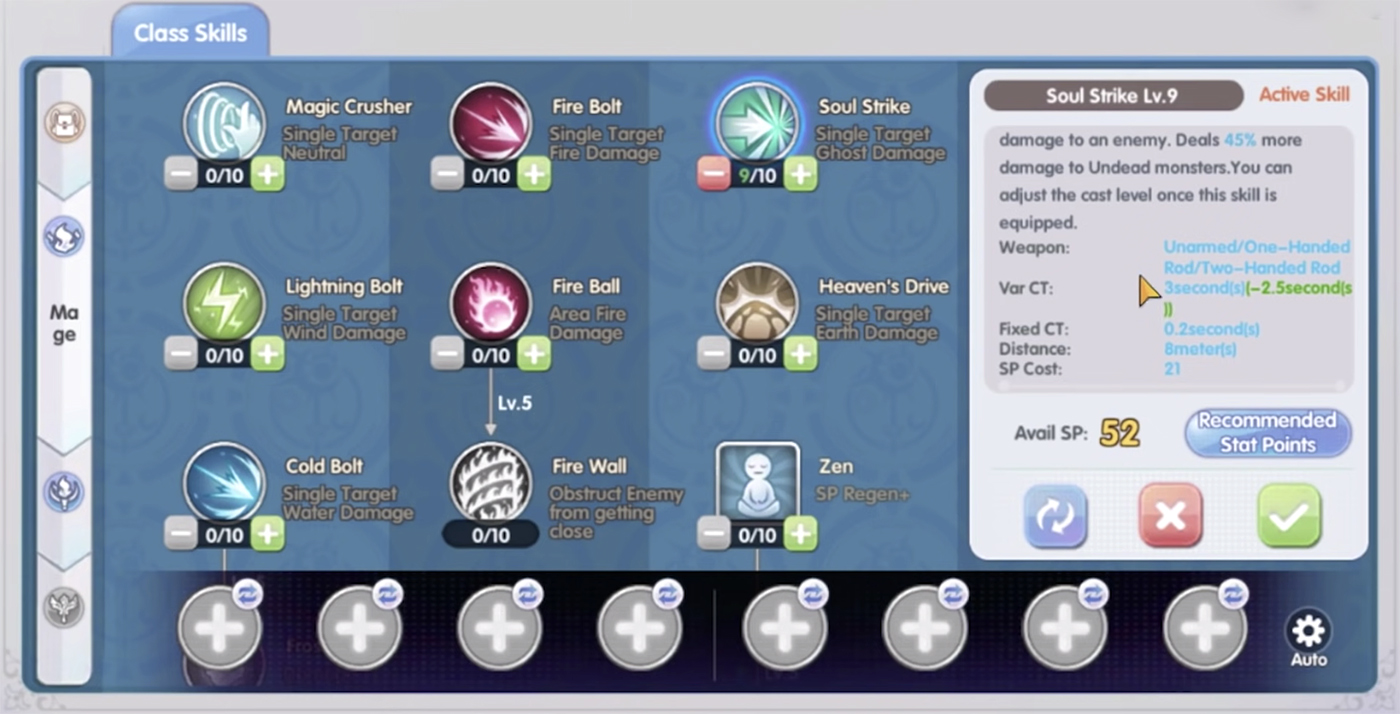 Players can also allocate points to specific skills, depending on the build they choose. For example, the Meteor Storm skill is a perfect fit for the Fire Wizard. It is advised that players choose skills that are AoE-based, instead of focusing on a single target.

It is advised that players use a two-handed rod as their weapon. This weapon provides the character with a lot of Vigour, which reduces the skill cooldown. Similarly, players need to equip accessories and a talisman that provides the most Vigour.

Wizards are one of the most powerful jobs in Ragnarok X: Next Generation. It is recommended that players allocate most of their points into the Intelligence statistic, while allocating some points into Dexterity.

Players can choose which Wizard build they want to follow. However, there are base skills that are recommended for all types of Wizards, including Soul Strike, Magic Crusher, Storm Gust and Lord of Vermillion.

It is also recommended that players equip a two-handed rod, as it provides the most Vigour. With regard to the accessories and talisman, players should equip the items that gives the most Vigour to reduce the skill cooldown.