Modernia in Goddess of Victory: Nikke is a powerful attacker with unique skills, however, players may have a difficult time obtaining her.

In this role-playing video game, Goddess of Victory: Nikke, players can control 1 of up to 5 interchangeable characters. The characters, which are known as Nikkes, are distributed in a row facing a battlefield and positioned behind a defensive object.

One of the Nikkes that you can collect is Modernia. Modernia is a plain and delicate girl who sold out mankind.

In Nikke, Nikkes are divided into different categories which are determined by their rarity. Players can thus acquire Super Supreme Rare (SSR), Super Rare (SR), and Rare (R) characters. SSR characters have a maximum level of 200, while SR characters can be levelled to 160.

Rare characters, on the other hand, can only reach level 80. If you want to increase your character’s maximum level, you need to get duplicate characters, otherwise referred to as Dupes.

Every character has a distinct Element, Role, and Class, which ultimately means that every Nikke is unique. Players can obtain different characters with which to defeat enemies on the battlefield.

Modernia is a plain, delicate girl who sold out to mankind. She is a member of the Queen’s elite squad: The Heretics. On the battlefield, she takes on the role of an attacker, which indicates that she is an offensive Nikke that can deal great damage to enemies. 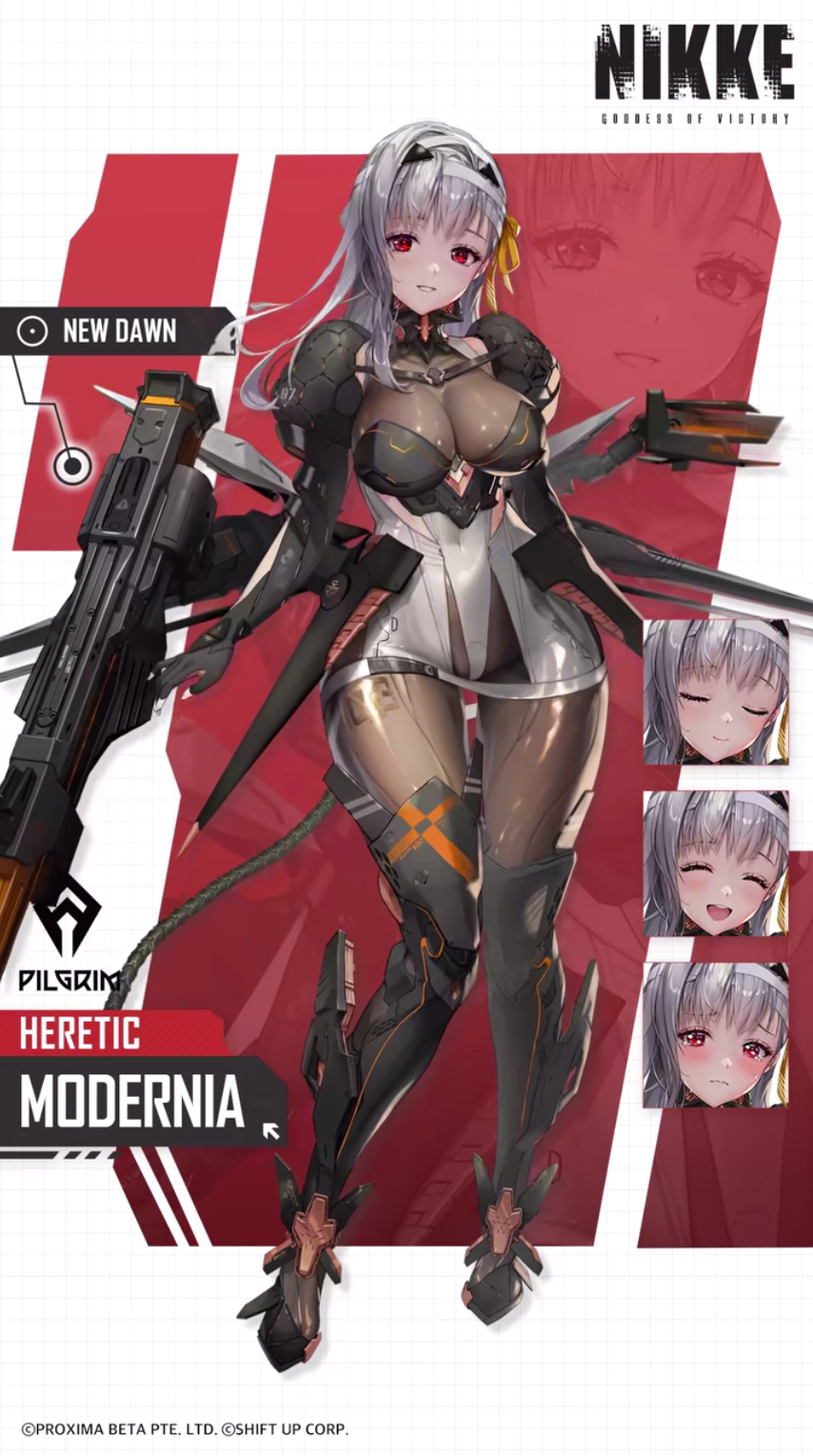 Moreover, Modernia has several skills which are indicated below:

All of the characters in Nikke have several advantages and disadvantages. Modernia’s burst skill gives her unlimited ammo, which is advantageous to her. This skill lasts a long time because of the extended burst phase with extended range.

In Nikke, Modernia does great damage with a self-attack buff and hit rate for allies during the burst phase.

Moreover, her burst skill benefits all units that have bonus buffs during the burst phase. She is also very effective against bosses as she does not need to reload frequently in the burst phase.

Her only disadvantage at this stage is that her skill, High-speed Evolution, reduces her ammo capacity until she uses her burst skill.

If you are lacking damage-per-second (DPS), you should acquire Modernia. This is because she is considered one of the best units in Nikke. If you have her on your team, she will boost all ally burst-phase passives or skills.

For instance, Nikkes that have beneficial buffs, such as attack buffs or cooldown reduction, will increase the overall team’s damage output over time. This means that your team will do more damage to enemies.

It is crucial to remember that Modernia is a pilgrim unit, which is extremely rare. Players can therefore use her in the Pilgrim Tower mode, which enables you to procure pilgrim nodes.

How to acquire Modernia in Nikke

Since Modernia is an SSR unit, players may have a difficult time acquiring her. Nikke is a gacha-based video game, which means that you have to get specific gacha currencies and then pull on a banner.

You thus cannot choose which unit you want to acquire, as this is randomly generated.

Modernia’s banner was released on 1 January 2023, and it will conclude on 19 January 2023. Since she is a Pilgrim unit, her rate-up will only be a 1 percent rate up. However, she is still available for purchase for approximately 200 gold mileage.

The normal gacha rate for SSR Nikkes is 4 percent, but as a result of the rate up increase, players have a 5 percent chance of successfully procuring Modernia.