One of the main things a player should be focusing on in Monster Hunter Stories 2 is collecting different kinds of monster eggs for the monster party.

As the descendant of the legendary Rider named Red, the player character has an encounter with a white-haired wyverian girl, Ena. Sha has been entrusted by Gardian Ratha with a Rathalos egg. Shortly after, a Rathalos with small black wings bursts out of the egg, which is said to bring ruin to the world.

As the story advances, the player faces various monsters that have glowing pink eyes. These “rage-rayed” monsters attack and destroy everything they see. It seems that their source is coming from the pit. It is up to the player to destroy the monsters in order to save the world.

One of the main things a player will be focusing on in the game is collecting different kinds of monster eggs. Players need to collect various monster eggs to build their perfect monster party. There are over 200 kinds of monsters throughout the game that players can encounter. However, some monsters are variants of each other. There are more than 85 monsters that are able to form part of the player’s party.

Where to obtain monster eggs

Players can obtain new monster eggs from nests, which can be found in monster dens. However, players can only get one egg from each nest. That being said, players will not know what is inside each egg, unless they are familiar with the egg pattern.

Players will have a few chances to change the egg in the hopes of a better one. It is important to note that there are only a finite number of times players can swap an egg before the nest empties. Nests relating to the storyline will generally empty after the player obtains the first egg. The nests are marked on the map with an egg icon.

Some nests will be guarded by a monster, some will have a sleeping monster, and some will be completely empty. Regardless of how the nest is when the player reaches it, if the player keeps swapping eggs and spends more time there, it increases the chance of a monster attack. Sleeping monsters cannot be woken any other way, so players do not have to worry about running into them or having to sneak around.

Players have to carry the egg out of the nest to properly obtain it, after which a pop-up box will appear, asking if the player wants to leave the den. Players can choose to immediately leave the den or remain. The egg will be placed into the players egg carton while they continue exploring the den.

How to carry monster eggs 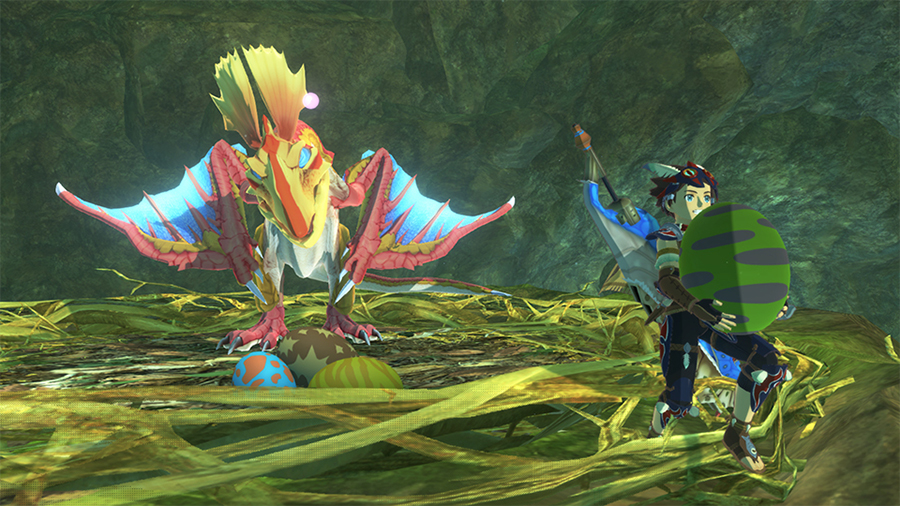 The egg carton can carry 12 eggs at a time. Players can access their cartons from the camp menu to view their current eggs and their information. The information includes where the player acquired them, the egg type, and its Navirou assessment. Players can choose to discard eggs from the carton at any time.

When players obtain an egg, Navirou will give the player his assessment of the egg. He will comment on its smell and its weight. The heavier and smellier the egg is, the better. This means that the player will have an increased chance of obtaining a monster with better or rare genes.

How to hatch an egg 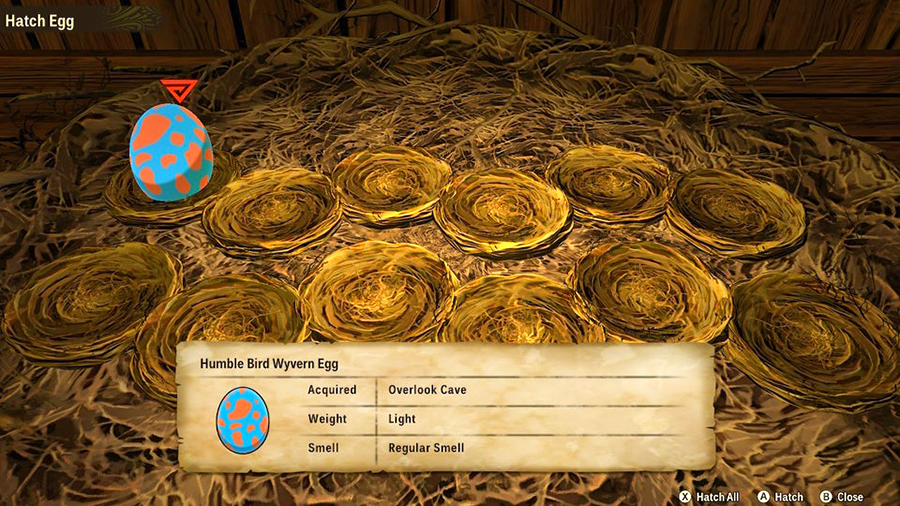 Players can hatch their eggs by visiting the stables. There is one in each village within the game, and it will be marked on the map with a little egg symbol. The feline outside the stable will have a yellow speech bubble above its head when there is an egg available to hatch. If an egg is of higher quality, players will see more statistics boosts appear on the screen when it is born. The monster will likely have better genes as well. Once the egg has hatched, it will be placed in the stable by default. Players should remember to move it into their party if they want to use it right away.

Players are able to expand the size of their stable by purchasing stable upgrades with bottle caps from the Melynx Inc. non-player character (NPC). As players expand their stable, they are able to obtain more monsters. At the stables, players can manage their party and perform the Rite of Channelling. Players can also send out an expedition party once the feature is unlocked.

Where to find monster dens

Monster dens are rocky outcrops with entrances that appear on the main map of each area. It also appears on any off-shooting smaller map areas. A monster den’s location changes every time a player enters a new map. Each monster den layout is randomly generated with different gathering spots and monsters residing within.

Special monster dens can spawn when a player makes a monster retreat in battle. When monsters retreat, a special monster den will appear with an egg above the doorway, and it will be indicated on the player’s map. These monster dens result in a guaranteed egg of the monster that created that den.

If players are after a specific type of egg, they can battle the monster in question, and make it retreat to force spawn a den. Once the player is inside the den, they can keep swapping eggs until they see the glow or sparkle feature. This will ensure a better-quality egg of the specific monsters. It is possible that special monster dens spawn within another monster den.

From time to time, a monster den will be gold instead of the normal grey rock. The gold colour indicates that it is a rare monster den. The nests within rare monster dens have an increased chance of yielding a better egg. Players should definitely explore any of these that they come across.

Even if the player does not want another monster, they can use the Rite of Channelling to pass the rare genes onto one of their favourite monsters to make it stronger. In addition, rare monster dens can be home to monsters that do not normally spawn in the immediate locale. This makes it the perfect spot for farming materials. Players can also make the monster retreat to spawn its own den.

The colours and patterns of eggs indicate the type of monstie the player will get. The egg colours indicate the specific monstie hiding inside. For example, Great Jaggi’s egg is purple with red spots, like a Great Jaggi’s colours. While a Zinogre egg is yellow and blue. If the player has played the game for some time, it is fairly easy to guess which monstie they will get based on this alone. The pattern tells the monster type, such as a Brute Wyvern or Herbivore, which further helps identify what is in the egg.

In Monster Hunter Stories 2, there are over 10 types of monsters that can produce eggs. These monsters include, but are not limited to:

Nergigante eggs can be found in rare dens located in Terga Volcano Base and surrounding areas. However, players should remember that none of the other elder dragons are obtainable until they have completed the game. The eggs only appear in super rare dens and in nests on multiplayer explore quests. Elder Dragons share the same star-like pattern.

There are currently six Palamute eggs players can obtain in Monster Hunter Stories 2. However, these eggs require a specific method after reaching Lulucion in the main story.