Additionally, players can join a dominant clan in order to participate in a large-scale, player-versus-player (PVP) mode. Players are also able to hunt enemies with their friends and declare war. However, if players prefer not to participate in combat, they are able to enjoy the peaceful life of crafting, meditating, questing, hunting and gathering. Whatever players choose to do, their story will be legendary.

MIR4 was one of the first games to introduce a unique looting system. It features a free-for-all loot system. This means that players have the right to claim any loot, even if players did not participate in defeating the monster. However, this does not apply to treasure chest loots. Players have 30 seconds to protect the loot they want, while others have 30 seconds to fight for the right to claim the loot.

Before players can start to play MIR4, they will need to create a digital avatar. The game currently features four distinct classes players can choose from. It is important to note that each class has unique skills and abilities. The following table indicates the name of each class, short description of the class, and their ultimate abilities:

As mentioned above, players are able to enjoy the peaceful side of the game by gathering, mining, meditating and hunting, among others. There are multiple in-game locations where players will be able to perform these activities. However, not a lot of players are aware of the ultimate Secret Peak in MIR4.

What is Secret Peak? 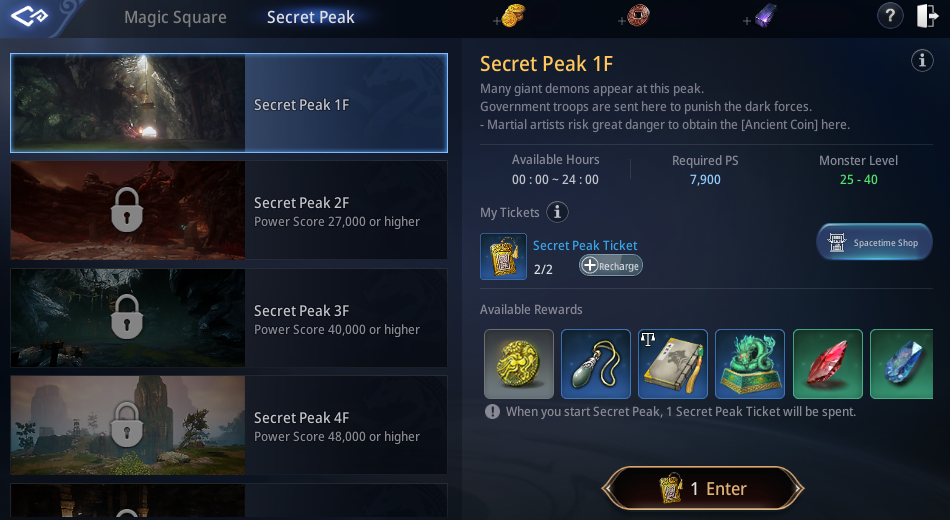 Secret Peak is a map where players can hunt for bosses, mini bosses, farm copper and loot treasure chests. Additionally, players are able to perform mining, gathering and meditation activities. Secret Peak is very similar to Magic Square, however, there are only a few bosses in Magic Square and players need to teleport, randomly, to reach a specific chamber.

While Secret Peak is a whole map where players are able to run or do air wall to reach specific locations on the map. The map also features several bosses and mini bosses for players to defeat.

How to unlock Secret Peak

Players are able to unlock Secret Peak by doing the main quest of the game.

How to travel to Secret Peak

In the new menu, players will discover that Secret Peak features multiple floors, for example: 3F. The number indicates the level and the “F” means floor. In this case, 3F refers to the third floor of Secret Peak.

It is important to note that the more power sources the character has, the more floors they will be able to unlock. 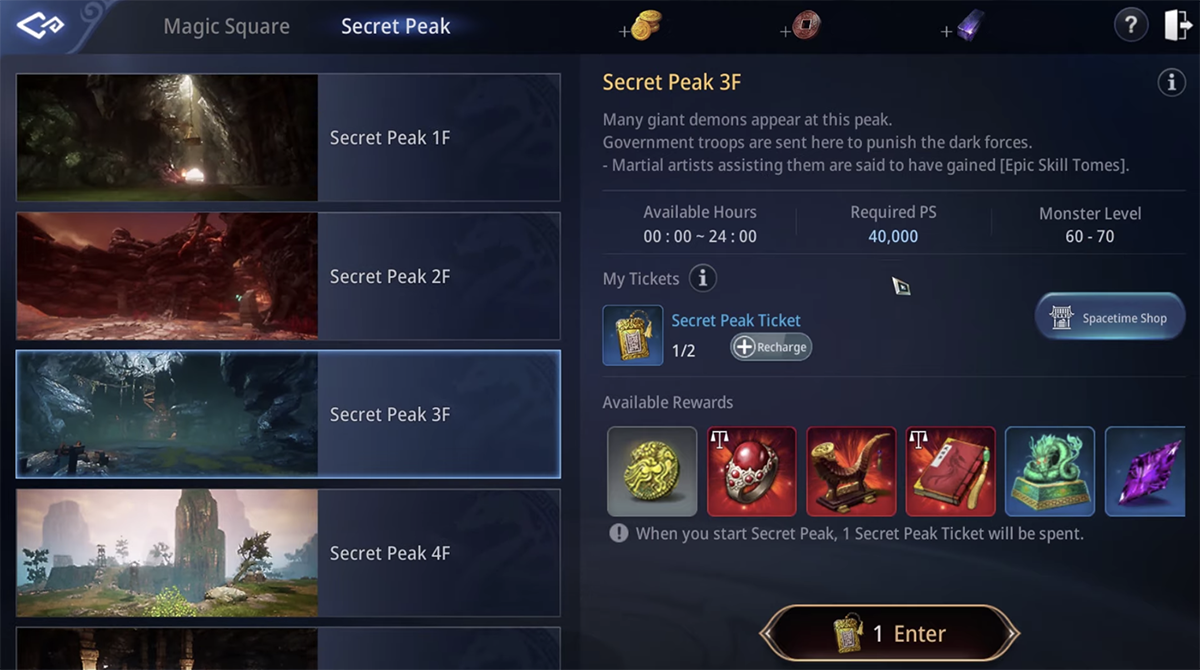 Each floor has different-levelled monsters. When players first start with Secret Peak, they will only have two entries. Players can either use gold or tickets to increase their entries. However, they can have a permanent plus one entry if they upgrade their millennial tree.

Players can find their millennial tree in conquest. If the tree is upgraded to plus 13, players will obtain a permanent plus one entry. It is important to note that the entries will reset every day at midnight, server time. Players should do this to ensure that they use up all their entries before the reset, as it will not add up.

Every floor in Secret Peak features a spawning and entering area. In this area, players will be able to interact with various non-playable characters (NPCs). Players can buy a variety of items from the NPCs, including potions, upgrades, training and badges.

It is important to note that some of these items can only be purchased using crystals. However, it is recommended that players purchase badges as they will need them to summon a boss in Secret Peak. Players can obtain crystals by doing different types of activities, such as killing monsters, defeating bosses and mining inside Secret Peak.

Players are able to defeat multiple bosses in Secret Peak. It is important to note that the green monster icons on the map are the mini bosses, while the red and yellow icons are the main bosses. Since there is a time limit, it is recommended that players first kill the green or mini bosses. Players should also kill them first as they have the lowest Health Points (HP). If players have enough time left, they can defeat the yellow bosses, before trying the red bosses.

Players need to be aware of where the yellow or red oars would usually spawn in the map. The picture below indicates where players will find specific resources. However, players should be aware of the following keys: 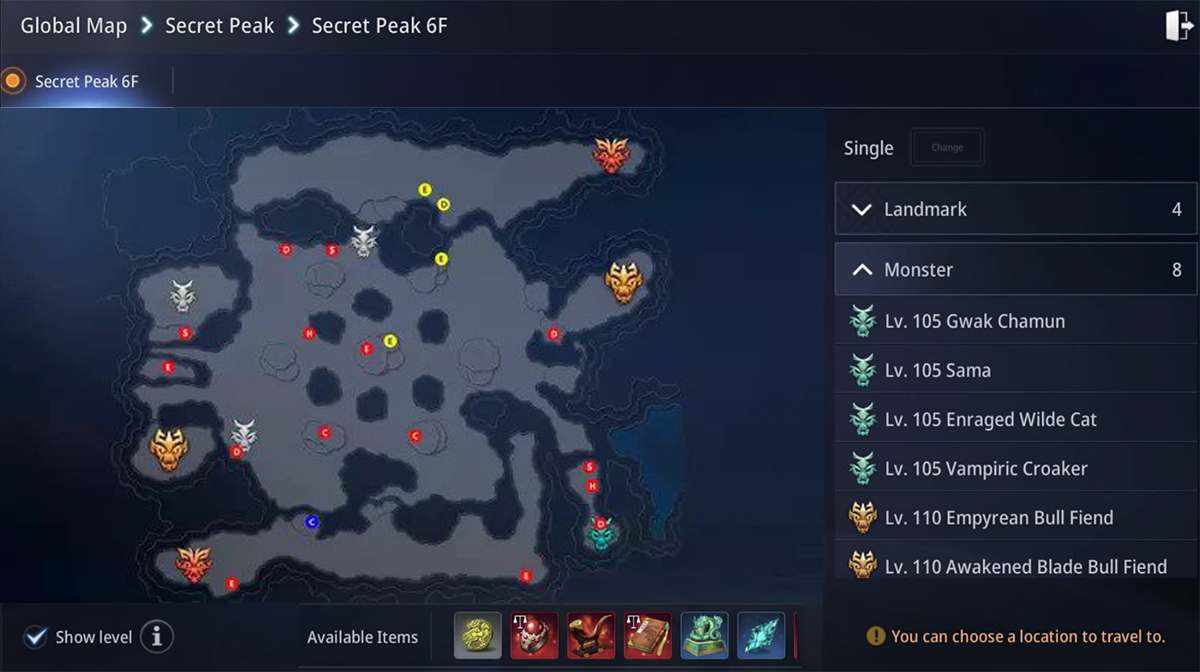 How to gain experience in Secret Peak

In MIR4, players are able to participate in various activities; from capturing the Hidden Valley, hunting enemies, participating in a large-scale PvP, to gathering, meditating, questing, mining and hunting.

One of the unique features in this game is the Secret Peak system. It is important to note that players will only unlock Secret Peak once they progress in the main storyline and once they have completed specific main quests. Secret Peak is an area where players can defeat mini bosses, kill bosses, loot treasure chests, and farm various resources.