Players can complete mystery missions in MIR4 to obtain various rewards; for instance, if they complete the Beautiful Sister Magya mission, they will receive a Nefariox Spell Charm.

MIR4 is a very popular free-to-play, open world massive multiplayer online, role-playing game (MMORPG). The game invites players to venture into the world of MIR to start their own adventure. Players are able to join a powerful clan to participate in large-scale player-versus-player (PVP) with other allies and enemies. However, players can also enjoy the peaceful life of gathering, crafting and hunting.

Additionally, players can set a bounty on an enemy, capture the Hidden Valley, collect taxes on profits and get assistance from their friends to hunt down enemies. Players are also able to join a 50-player raid in order to get rare items, participate in castle sieges and declare war. Whatever players choose, their story will be legendary.

MIR4 was the first to introduce a unique free-for-all loot system. This means that anyone has the right to claim the loot, even players that did not participate in defeating the monster. With regard to special treasure chests, players have 30 seconds to protect the loot they want. While other players have 30 seconds to fight for the right to claim the loot.

In the game, players can choose between four classes. The following table indicates the name of the class and a description of the class:

In MIR4, players are able to complete various missions and quests in order to obtain special rewards. However, many players are not aware that the game features multiple mystery missions, one of which is the Beautiful Sister Magya quest.

How to begin the Beautiful Sister Magya quest

Once players have clicked on the tab, a new menu will appear on-screen. On the left, players will see various categories, each paired with a photo of a non-playable character (NPC). Players can select the Nefariox Horn category to discover the Beautiful Sister Magya quest. The menu will also indicate how far the player has progressed in the quest. Players can select the mission to view the first clue.

The official description of the first clue states that Yiun mentioned that a variety of people visit the Taphouse and talk about all kinds of things. Talking to others is thus a good way to gather information. The clue also suggests that the player should go talk to the people in order to obtain information about Bicheon Castle before deciding what to do. 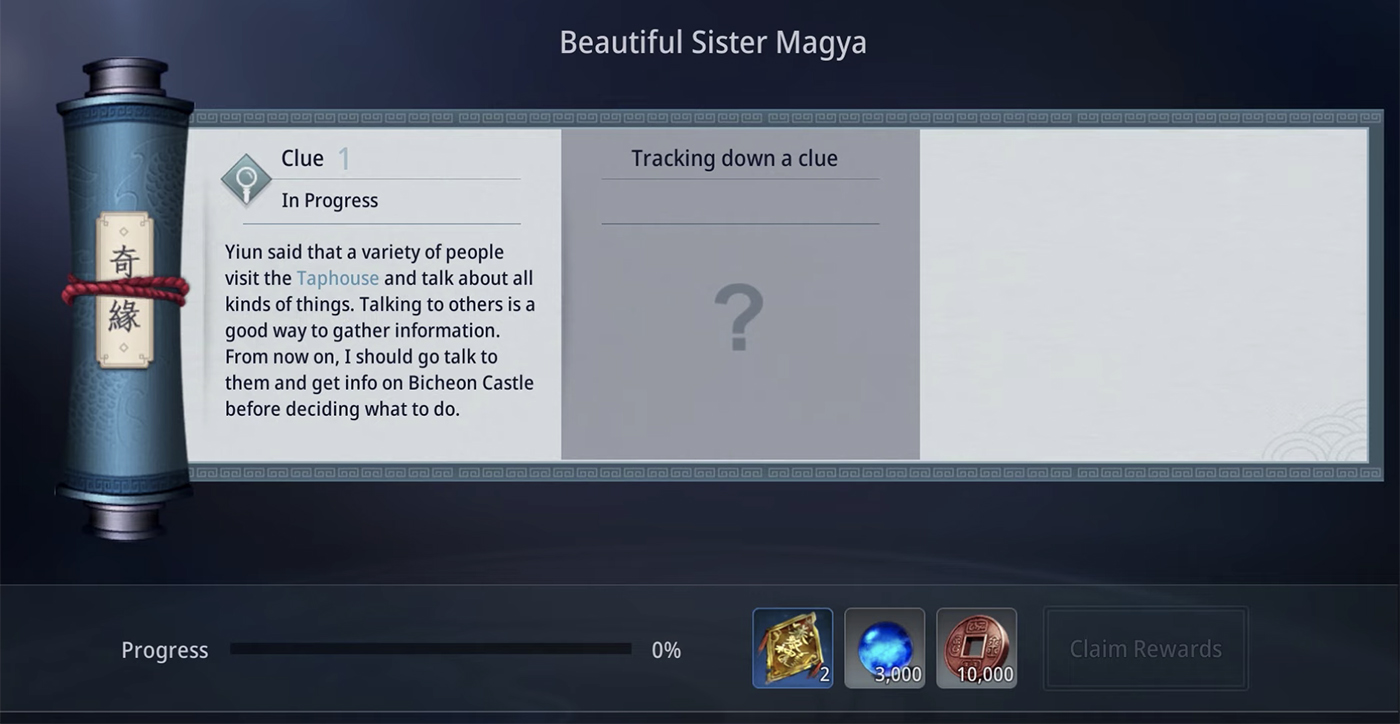 After reading the description, players need to travel to the Bicheon Castle Taphouse. Once players are inside the Taphouse, they can talk to Seolan the liquor merchant. It is recommended that players purchase one Floral Spirit and one Dawnbreather.

Players should then join the conversation between Ho Bangchu and Jangpyung. These NPCs are located on the first floor of the Taphouse. Once the conversation is over, players will unlock the second clue for the mission.

Clue two of the quest reveals that Magya, the Queen of Bicheon Castle, is Princess Cheonpa’s mother. The clue also states that players should meet Eunshil at the linen shop of Bicheon Castle. When arriving at the shop, players need to engage in a conversation with Eunshil. Once the conversation is over, clue three will be unlocked.

The clue states that after the Queen went missing, her whereabouts were unknown. However, people are talking about her. This indicates that she might have been at the location. Players need to meet Jangsam at the Forge if Bicheon Castle.

Players will need to talk to Jangsam to gain more information about the Queen. Once the conversation is over, players will unlock clue four.

Clue four states that players need to go back to Bicheon Order Taphouse in order to talk to Ho Bangchu. After talking to him, players will be able to begin with clue five.

The clue states that the player should discover what Sweetgrass Liquor is and where to find it. Luckily, players can talk to Jangpyung as he knows a lot about liquor. He reveals that obtaining the liquor is not an easy task. He also mentioned that the Twinway Clan’s Looter Captain in the backstreet likes that drink.

Players then need to travel to the Backstreet. There they will need to defeat the looter in order to claim the liquor. When the fight is done, players will unlock clue six.

According to clue six, players need to return to the Taphouse before Ho Bangchu gets too drunk. When talking to the NPC, players will discover what happened to the Queen. Once the conversation is done, players have completed the Beautiful Sister Magya mystery mission.

Players will receive various rewards for completing the mission, including a Nefariox Spell Charm.