Players are able to obtain Ancient Dragon Tokens in MIR4 by looting treasure chests, defeating mobs and completing a raid.

MIR4 is a popular free-to-play, role-playing, open world massive multiplayer online game (MMORPG). The game allows players to venture into the world of MIR to start their own adventure. Players are able to join a 50-player raid in order to get rare items, capture the Hidden Valley, participate in castle sieges and declare war. However, players can also collect taxes on profits, get assistance from their friends to hunt down enemies, and set a bounty on an enemy.

Additionally, players can enjoy the peaceful life of gathering, crafting and hunting. However, players are also able to join a powerful clan to participate in large-scale player-versus-player (PVP) with other allies and enemies. Whatever players choose, their story will be legendary.

Before players can enter the world of MIR4, they need to create a digital avatar. Players are able to choose between four classes. The following table indicates the name of the class and a description of the class:

Players can receive multiple Ancient Dragon Tokens when they successfully complete a raid, loot treasure chests, unsealing in the magic square or defeat mobs. It is important to note that the tokens are binded to the character. This means that players will not be able to sell these tokens to other players. 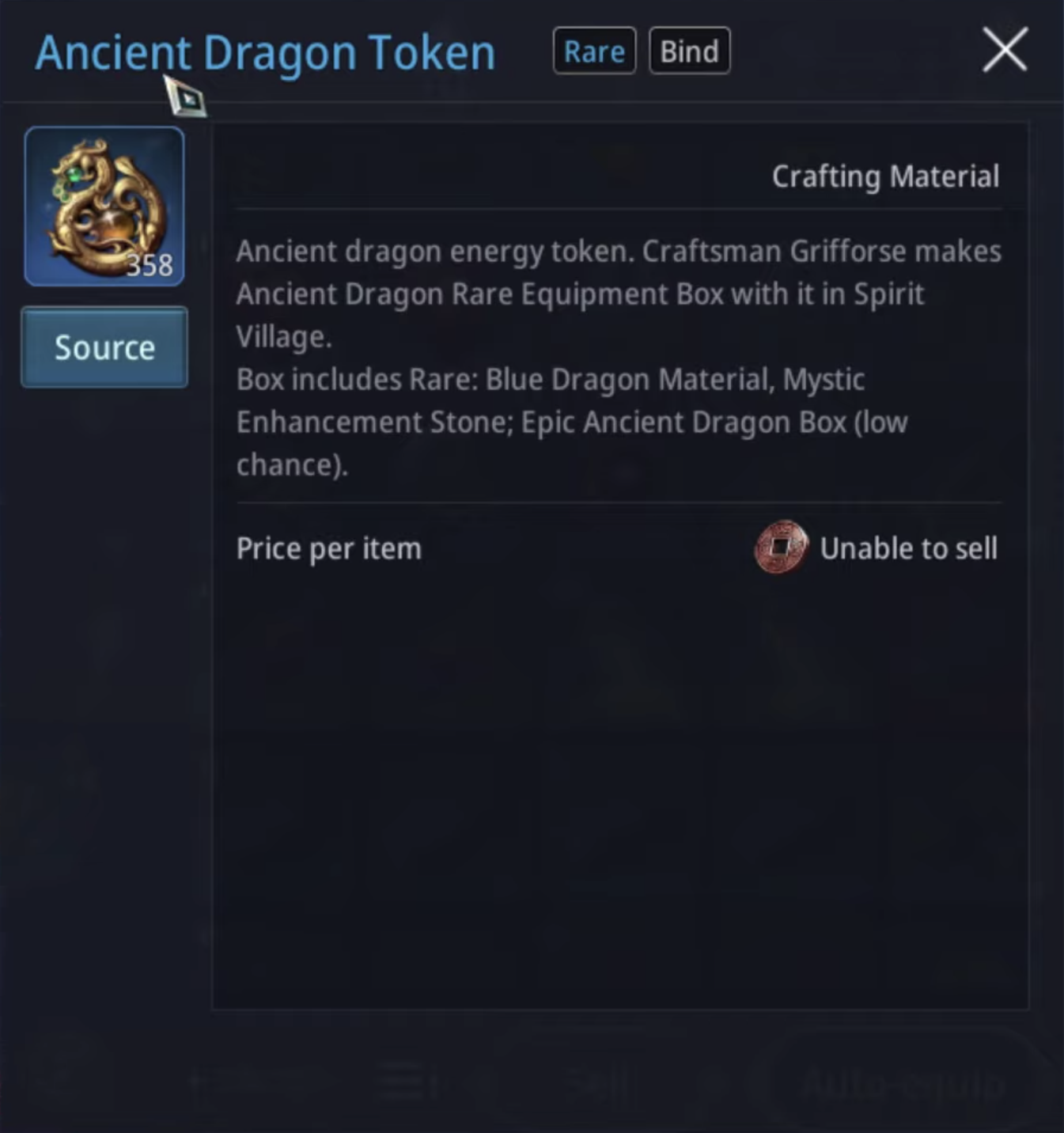 Where to exchange the Ancient Dragon Tokens

Even though players are not able to sell the Tokens to other players, they are able to exchange them at a non-playable character’s (NPC) store. To find the NPC, players should first open their in-game Global Map. On the map, players need to select the Bicheon Area. After selecting the Bicheon Area, players can click on Arcadia Spirit Village.

Players are able to fast travel to the area by selecting on of the merchants on the right-hand side of the menu. Once players arrive at Arcadia Spirit Village, they will discover various NPCs. However, they need to interact with Craftsman Grifforse. After speaking to him, a new menu will pop-up.

One of the boxes costs approximately 300 Tokens and players stand a chance to obtain a blue dragon leather or horn. Players can also obtain a mystic enhancement stone. This means that players will be able to craft one blue item.

The Spirit Tome box costs approximately 300 Ancient Dragon’s Spirit Tokens. It is important to note that these Tokens may take a very long time to obtain as they are very rare. Players can unseal this box for a chance to obtain a rare spirit. 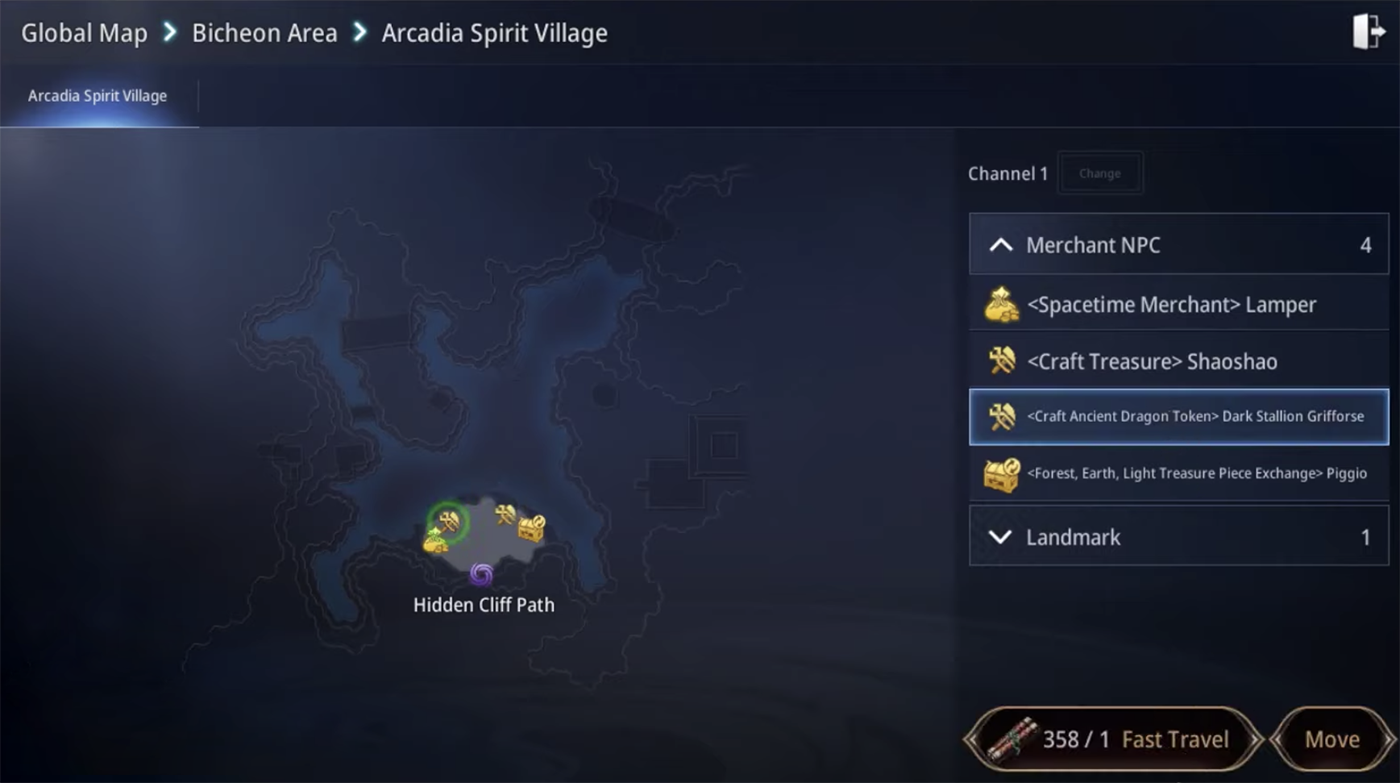 The Treasure boxes cost approximately 150 tokens and are the easiest to obtain. Players are able to obtain the Tokens by looting multiple chests. When players craft a Treasure box, they can obtain one of six rare magic stones or a rare spirit treasure.

How to craft a box

Players will be able to see how many tokens they have in the store menu. After selecting the box they want to craft, they can indicate how many boxes they want with the plus and minus icons. Players are then able to craft their desired boxes by selecting the Craft option.

How to unseal a box

In order to unseal a box, players need to open the in-game menu and hover on the craft option. Underneath the craft option, players will be able to select the unsealing tab. A new menu will appear on-screen.

Players can then add the box to the unsealing list. It is important to note that unsealing can take some time. However, players are able to speed up the process. That being said, the Treasure boxes do not need to be unsealed. Players can thus find them in their inventory and open them straight away.