Ragnarok X: Next Generation (ROX) features several life skills that players can develop, including mining which has a wide range of functions, such as refining, smelting and upgrading.

Ragnarok X: Next Generation, also known as ROX, is a mobile massively multiplayer online role-playing game that forms part of the Ragnarok franchise. ROX maintained the spirit of the well-loved classic Ragnarok Online. However, it introduces a lot of fresh features and innovative gameplay mechanics that a player would not find in the classic version.

The game invites players to Midgard’s fantasy world, to fight an evil presence that threatens to tear the world apart. Players can get lost in this bright and luxuriant world with the mesmerizing art style that captures the real charm of the game.

Players are able to create their own digital avatars to live in the world. The player can customize their avatar by equipping costumes, accessories and powerful gear. The avatars can also be constantly upgraded with better equipment systems, which can help the player to proceed further in the game.

Ragnarok X: Next Generation’s stamina system differs from other games. Players do not need to stamina to gain experience and loots in the game. However, the stamina is used for a different feature in the game, called RO Life. Players use their stamina to go fishing, mining, gardening, smelting, crafting and cooking in order to obtain various materials.

Mining materials have a wide range of functions, such as upgrading, refining and smelting. As mentioned above, players need stamina to mine. Each mining process consumes two stamina points. Players are required to buy one of the pickaxes in order to mine.

There are multiple kinds of pickaxes in the game: normal pickaxe, advance pickaxe and alloy pickaxe. However, these pickaxes are consumable items. This means that once the player consumes the pickaxe’s durability, they will need to buy a new one. 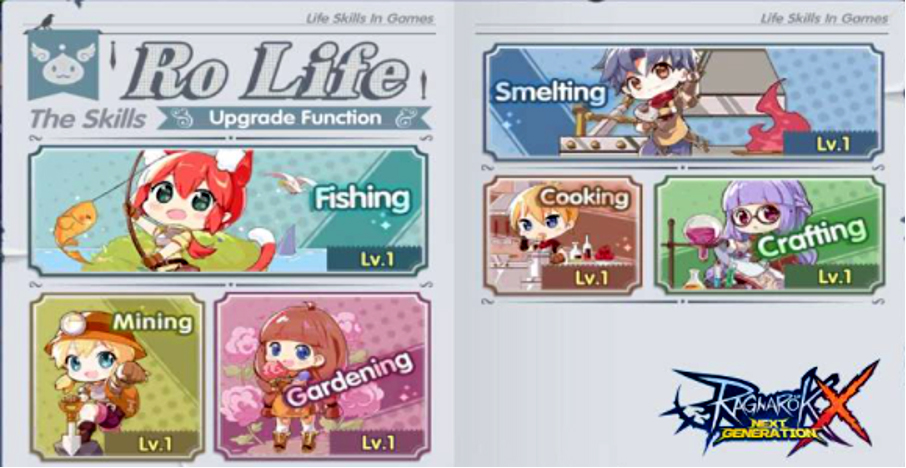 In the Life Skills menu, under mining, players can discover all the information they need in order to do proper and successful mining. The menu informs players of their current level and the experience required for the next level. Players will also find an encyclopaedia of all mineable rocks in the menu.

When a player clicks on one of the ingredients, they will see detailed information on it. For example:

Items obtained through mining are mostly used for smelting and crafting. Players can use them as one of the components for crafting, “enchant, enhance and refine” materials. For example, when a player wants to craft Pharacon, they will need 10 levels and one strengthening material.

While Mining, players get experience point for mining life skills. When the mining skill reaches a high level, players are able to mine higher level veins. 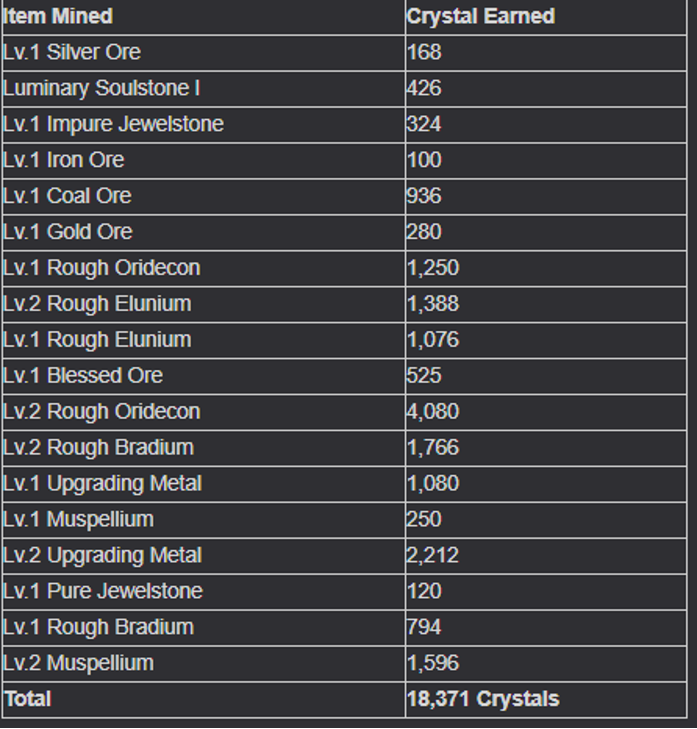 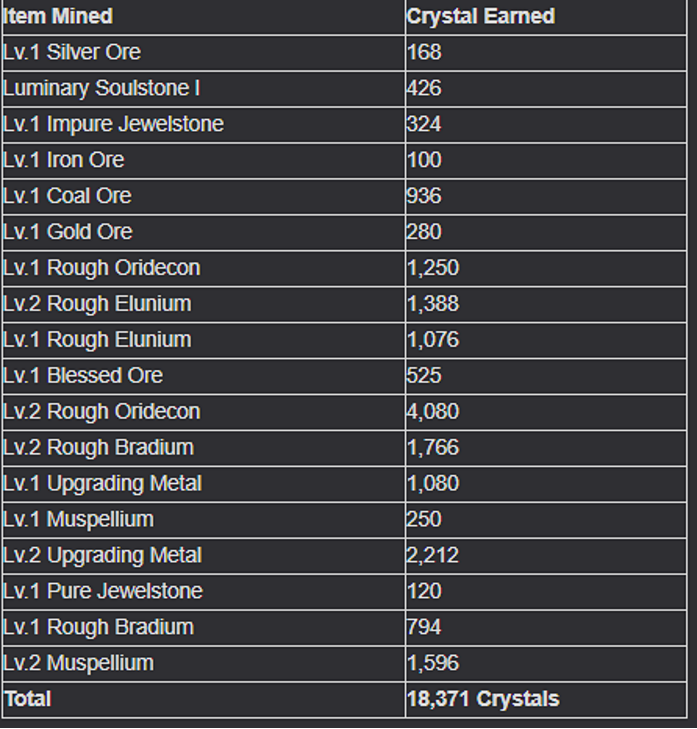 How to get pickaxes

The normal pickaxe is a regular mining tool that players can buy. This tool can be bought at Sundries shops in all the major cities. A normal pickaxe cost approximately 18 000 Zenies.

An advanced pickaxe is a tool made by craftsmen and helps the player to mine faster than a normal one. This pickaxe is also more comfortable and efficient than a normal pickaxe. However, it is three times more expensive. It can also be bought from Sundries shops and costs around 54,000 Zenies.

This is a sturdy pickaxe and can deal with more advance mineral veins. It is sued to gather level nine veins. The Tungsten gold pickaxe cost 1,50,000 Zeins and can be purchased at Sundries shops.

This axe is described as a special tool. Mining at enriched veins will automatically consume this item. However, the player will obtain multiple minerals. This tool can only be obtained through the Glory Pass reward, or from a crystal shop located in Alberta City. 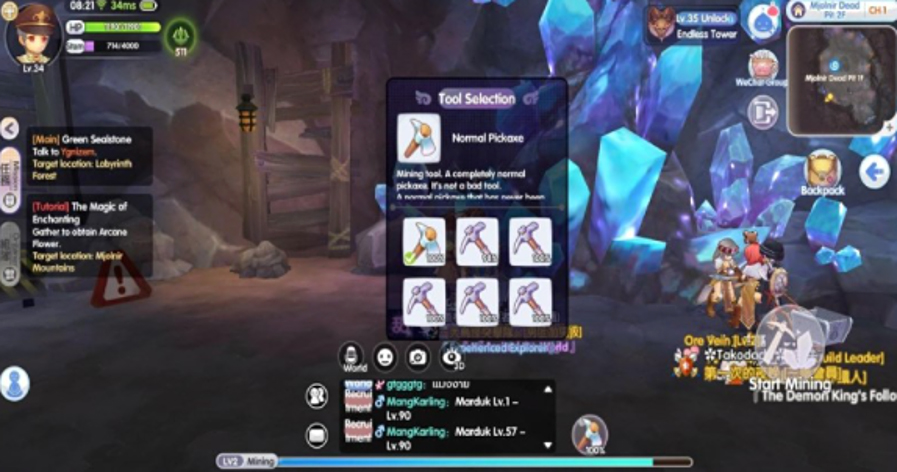 The advanced and normal pickaxes can be used to mine level one to level eight veins. However, advanced pickaxes are faster, but are also more expensive than the normal ones. Players obtain the same number of materials with both pickaxes. However, players will just be done sooner with an advanced pickaxe.

Players can go to the mining menu and click on the mining location of the particular ingredient they want to farm. The auto-pathing will guide the player to the specific location. When the player arrives at the vein location, the mining button will pop up. The player can start by choosing which pickaxe to use, and the mining will begin automatically.

Players are able to do other stuff while the mining is going on, until the pickaxe finishes. However, players should pay attention to their stamina levels. Each mining attempt can use up to four stamina points. Less stamina will be consumed for lower-level veins and lower rewards. Players should also remember that the number of stamina they spend directly equates to the amount of experience they get from mining that time. 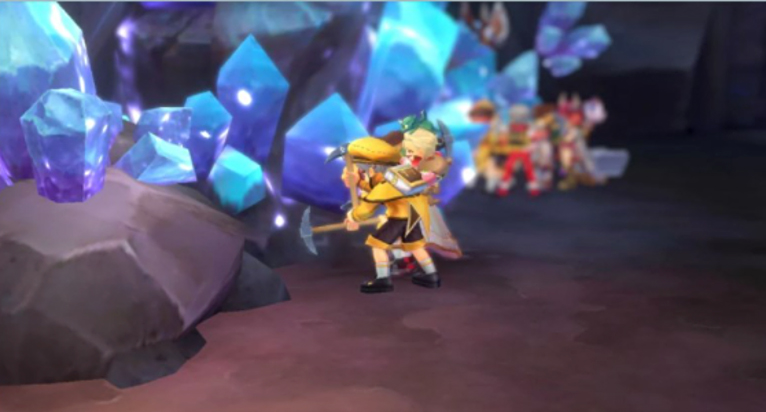 Life skills are used for farming ingredients in order to build gear, and other tools to enhance gameplay. In addition to fishing and cooking, mining is one of the life skills that helps players gather ingredients. Whether the player wants to craft, smelt, or sell the items in the exchange centre, mining is definitely worth it.