One of the latest villains to join Marvel Strike Force is Lady Deathstrike, who takes on the Brawler role in a Weapon X team.

Marvel Strike Force is a popular role-playing, turn-based mobile game. As the name suggests, the game takes place in the Marvel Universe. The official description states that an assault on Earth has begun. Subsequently, superheroes and super villains are working together to defend our planet.

The game invites players to collect Marvel Universe characters, this includes villains, heroes and generic characters. This means that the game features characters from The Hand and Hydra. Additionally, they can obtain characters from the Strategic Homeland Intervention, Enforcement and Logistics Division (S.H.I.E.L.D).

How to unlock characters

Players should remember that there are various methods to collect new characters. Some of the characters are given to players, whereas others are obtained through gameplay. However, they can also collect characters through in-game rewards in the form of shards.

It is important to note that shards can also be used to promote characters. Players can either purchase the shards from the in-game shop, or it can be earned from winning battles.

Marvel Strike Force features multiple game modes, including Alliance War, Blitz and Challenges. However, they can also participate in Real Time Arena, Raids and Arenas. All of the game modes, except Real Time Arena, have their own currency. It can be used to purchase items or character shards from the in-game store.

Real Time Arena is the only game mode which consists of player-versus-player (PvP) battles. The other modes are all player-versus-environment based. The following table indicates the name of the game mode and a short description of each:

As mentioned above, players can obtain various heroes and villains in the game. One of the latest released characters that they can collect is Lady Deathstrike.

Yuriko Oyama, also known as Lady Deathstrike, is the daughter of the Japanese scientist and crime lord, Kenji Oyama. He developed the process by which Adamantium could be bonded to a human skeleton. After his death, Yuriko sought to restore honour to her father by tracking down and defeating those who stole her father’s scientific discovery.

This desire led her to confront Wolverine. After being defeated by him, Yuriko had her body outfitted with extensive cybernetic enhancements. She now goes under the name, Lady Deathstrike and has worked as an assassin.

It is important to note that Lady Deathstrike slots into the Weapon X team. She takes on the role of a Brawler with solid Damage, Speed and Focus. Players should note that her abilities feed off of Bleed, as she receives a different bonus for each of her attacks.

Even though she is a Brawler, she also offers key defensive facets to the Weapon X team. Lady Deathstrike has the ability to clear negative effects and provide Immunity. Additionally, she provides bonus Focus and a heavy Bleed resistance to herself and all allies. 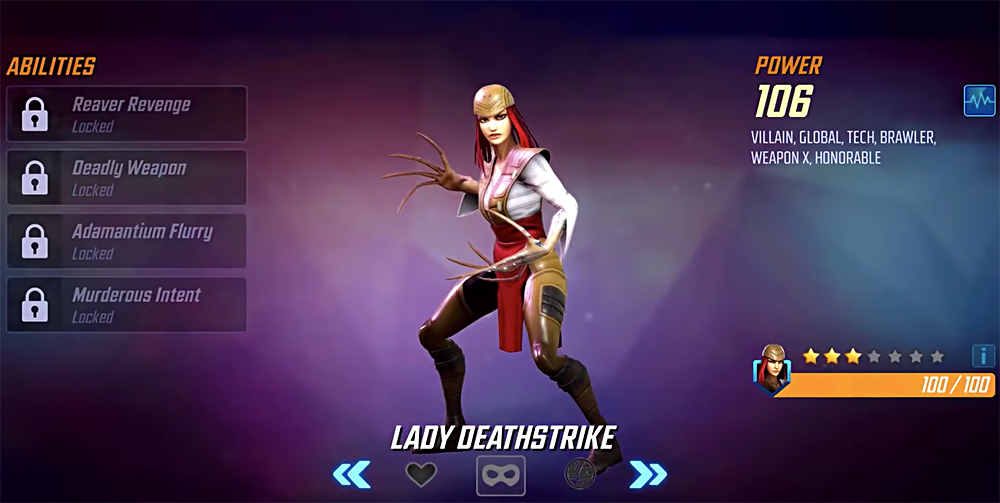 The following table indicates all her abilities at maximum levels:

Marvel Strike Force is a popular role-playing game set in the Marvel Universe. It allows players to collect various villains and heroes from the movies and comics. One of the latest released characters that players can obtain is Lady Deathstrike.

It is advised that players slot her into a Weapon X team, where she takes on the role of a Brawler. Lady Deathstrike features solid Damage, Speed and Focus. Players should remember that her abilities feed off of Bleed.