In Marvel Strike Force, players can obtain various characters, one of which is Carnage, who brutally tears through his enemies with negative effects.

Marvel Strike Force is a popular turn-based role-playing mobile game, set in the Marvel Universe. The official description reveals that an assault on Earth has begun. Subsequently, Super heroes and super villains are working together to defend our planet.

How to obtain characters

The shards can either be earned from winning battles or bought from a shop. It is used to promote or unlock characters.

It is important to note that the battles are divided into rounds. Generally, the character with the highest speed attribute goes first. Each team features up to five characters who fight until defeated, or reinforcements enter. However, some artificial intelligence teams in raids can have much more characters.

As mentioned above, the game is turn-based. During battle, characters apply healing and multiple buffs to their own team and damage. Additionally, they apply debuffs to the enemy, while trying to deal the most overall damage and having the last character alive.

Players should remember that the game features multiple game modes, including Raids, Arena and Blitz. However, they can also participate in Challenges, Real Time Arena and Alliance War. All of the game modes, except Real Time Arena, has their own currency. The currencies can be used on items or on character shards.

Real Time Arena and Arena are the only game modes which consist of player-versus-player (Pvp) battles. The other modes are all player-versus-environment based. The following table indicates the name of the game modes and a short description of each:

As mentioned above, players can collect various characters, one of which is Carnage. He is an insane Brawler that barbarically tears through his enemies with negative effects. It is believed that he attacks more frequently as their health decreases. 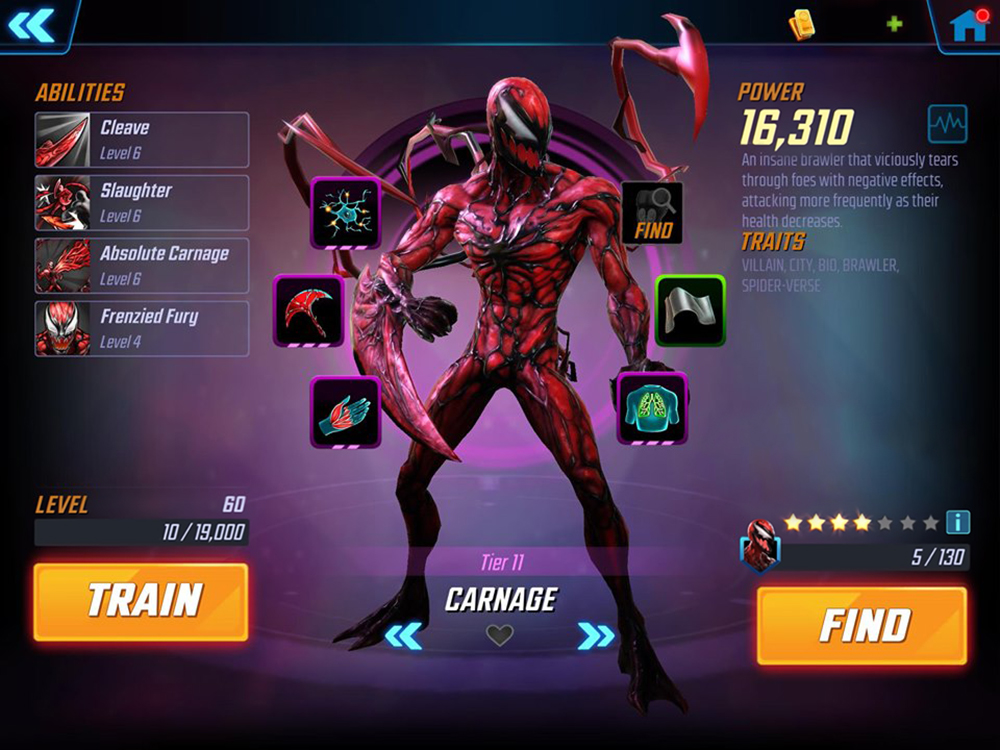 How to obtain Carnage

It is important to note that Carnage is unlocked at three stars, which costs approximately 100 shards. Players can obtain his shards in the War Store for approximately 1 375 War Credits, for five shards.

The following table indicates Carnage’s abilities, along with a description of each:

It is important to note that the above-mentioned abilities, except Assist, are able to level up. With each level up, it will increase the damage done to the targets.

Marvel Strike Force is a very popular mobile game, set in the Marvel Universe. It features various characters from S.H.I.E.L.D, Hydra and The Hand. One of the characters players can collect is Carnage.

He is an insane Brawler that tears through his enemies with multiple negative effects. Players are able to use him in their team to participate in the gaming modes.