In LOTR: Rise to War, players can control various Commanders, but each Commander requires stamina to enter battle.

Lord of the Rings (LOTR): Rise to War is a popular strategy game, based on the classic trilogy, Lord of the Rings. The game reminds players that the epic tales of old, be it of glory, friendship or love are in days gone by.

A new War of the Ring is on the horizon, and the destiny of Middle-earth now lies in the players’ hands. A new evil force has been growing, and it is sweeping through every part of the fantasy realm of Lord of the Rings.

The various factions are thus desperate to seize control of the One Ring and take dominion over Middle-earth. The game takes place in the Third Age of Middle-earth, and it offers a beautiful and faithful interpretation of the fictional world of Arda.

When players first start to play LOTR: Rise to War, they will be able to choose a faction. After choosing, they will have to complete a tutorial mission in order to understand the gameplay and mechanics.

To collect more resources, players will need to acquire more land. It is important to note that the land with a purple border belongs to other players in the same faction, while the land players own are indicated by a green border and enemies have red tiles.

Players can obtain new Commanders by offering them gifts. To do this, they need to go to the Tavern, before selecting Recruit Commander. On the new menu, players can view all the Commanders they can unlock through in-game progression.

In order to boost the characters’ respect meter, players need to donate gifts to them. It is important to note that players may have to donate several gifts before earning their respect.

They should thus repeat the gift donations until the gold respect meter is full. At this point, the Commander will be ready to join the player’s army.

It is important to note that each Commander in LOTR: Rise to War needs stamina to function properly. This means that if a Commander’s stamina has depleted, he and his army, will not be able to fight in combat.

Subsequently, players will have to wait until the stamina bar has been refilled before using the Commander and the army in battle.

Waiting for a stamina bar to refill can take some time. Luckily, players can use a stamina tincture to replenish a Commander’s stamina.

How to obtain a stamina tincture 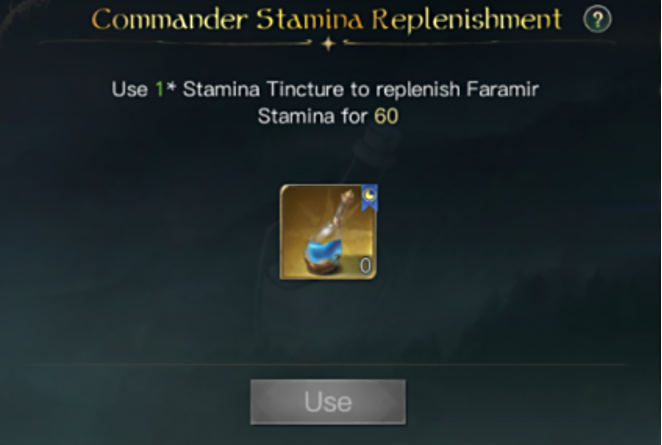 In LOTR: Rise to War, players can choose a faction. Each faction has its own Commanders, who serve as the leaders of armies. It is important to note that each Commander has a certain amount of stamina.

Commander’s and their armies need stamina to participate in combat. This means that if a Commander’s stamina has depleted, they would not be able to enter a battle.

Players will thus have to wait until the stamina has been refilled. However, they can also use a stamina tincture to replenish the stamina bar.