Players are able to collect the infamous Aragorn in LOTR: Rise to War, however, they need to offer him a gift before he joins the army.

The game reminds players that the epic tales of old, be it of glory, love or friendship are in days gone by. A new War of the Ring is on the horizon, and the fate of Middle-earth now lies in the players’ hands.

A new dark evil power has been growing, and it is sweeping through every part of the fantasy world of Lord of the Rings. The various factions are thus desperate to seize control of the One Ring and take dominion over Middle-earth.

The game is set in the Third Age of Middle-earth, and it offers a beautiful and faithful interpretation of the fictional world of Arda.

It invites players to embark on new adventures in order to build armies for conquest. Players will thus need to strategically expand their region in pursuit of the One Ring.

When players first start playing LOTR: Rise to War, they will be able to choose one of the 10 factions. Each faction features unique Commanders, skills, abilities and additional bonuses. After choosing, players will have to complete a tutorial mission in order to understand the gameplay and controls.

Once players have completed the tutorial, they can complete missions to obtain resources. However, players can obtain more resources by acquiring more land. The land players own are indicated by a green border.

Those with a purple border belong to other players in the same faction, while enemies have red tiles. Computer-owned tiles are indicated with white borders. It is recommended that players first take control of the computer-owned tiles before attempting to take land from an enemy.

As mentioned above, players will have to choose to side either with the bad or the good alliances. It is important to note that each alliance has its own unique characters, also known as Commanders.

These Commanders are the generals that lead the players’ armies. Each Commander has their own unique skill tree, which makes them powerful warriors.

Players are able to equip their Commanders with different armour sets, which can apply additional statistics and effects on the army. It is important to note that the choice of available Commanders depends on whether players choose a good or evil faction at the start of the game.

One of the Commanders players can obtain in LOTR: Rise to War is the infamous Aragon. Players can either obtain him by playing the game for some time or purchase him with real-life money. Players can obtain Aragon by purchasing the “Starter Pack” for approximately $1.26. 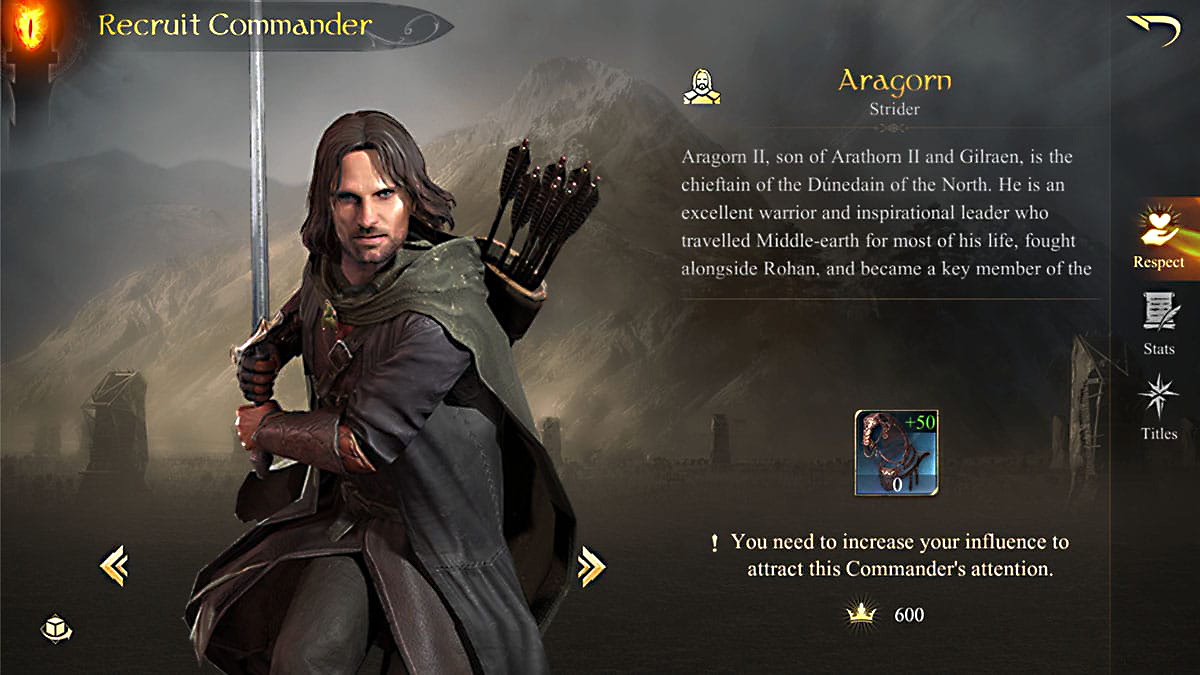 In the trilogy, Aragorn was the sixteenth and last Chieftain of the Dunedain of the North. However, he was later crowned King Elessar Telcontar. Aragorn is described as the Ranger of the North. In the game, he features various skills and abilities to defeat his enemies.

The following table indicates Aragon’s skills, abilities and a description of each:

If players want to add Aragon to their permanent collection, they will need to present him with gifts. Players need to offer the epic tier gift, Athelas to him. It is important to note that players will have to obtain three Athelas before Aragorn will join them.

In LOTR: Rise of War, players are able to collect various characters, including the infamous cc. Players can either obtain him by playing the game for some time, or by purchasing him using real-life money.