The patrol map feature in King’s Choice allows players to meet new NPCs, however, they should remember that it is in a gridded sphere shape.

King’s Choice is a popular role-playing game with a choice-based simulation. It puts players at the head of the royal table, in their own kingdom.

Developed by ONEMT, the game invites players to command a grand army of knights, build an empire and generate alliances. However, they can also date other royals and raise heirs.

The game is set in the medieval times, where players take on the role of a Lord’s only son. All seemed to go well until Aves, The Throne Usurper, arranged a successful revolution.

Additionally, he murdered the Lord to take the throne and locked his son inside a prison cell. Fortunately, the protagonist refused to lose hope and promised to take revenge on every single one of his or her enemies.

In addition to Aves, players will be introduced to a variety of characters. The following table indicates some of the characters and a short description of each:

As mentioned above, players will be playing as a Lord of a kingdom. Subsequently, they are responsible for various activities: military troops, land conquering, raising heirs, resource production and knights.

However, when they first start the game, they will have a level one Lord. As the level increases, they will obtain bonuses, such as an increase in silver collection limit, recruitment limit, and government affair limit.

It is important to note that the maximum level of the Lord is Superior Lord level five. Players thus have to progresses through 20 different levels to reach the maximum level. Each of the following categories consist of five levels:

The game offers a lot of activities for players to participate in. This includes outpost, university and lovers. However, they can also join the arena, go on patrol, visit Dragon Island and join an alliance among others.

In the patrol feature, players can walk through the different areas in the game. The objective of this feature is to meet new lovers and other women.

Players can go to the lover’s menu in-game to discover which character will be in which area of the map. It is recommended that they check the clue before traveling, as this will save a lot of time.

It is important to remember that the map is shaped like a gridded sphere. This means that if players go right from the furthest right area, they will enter the furthest left area.

Additionally, it means that if they move up from the most northern area, they will end up in the most southern area. This principle also applies vice-versa: from left to right, and from down to up.

The following image indicates the map on a gridded sphere: 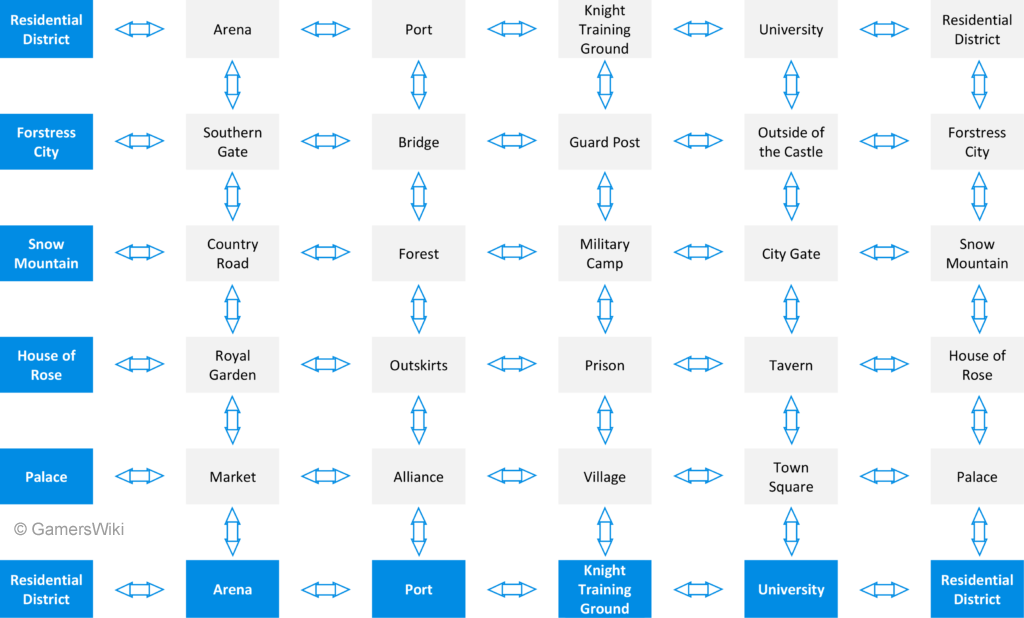 King’s Choice invites players to take on the role of the Lord’s only son. It is their responsibility to control military troops, knights and resource production. Additionally, they can date non-player characters (NPCs) to produce and raise heirs.

To unlock and meet new NCPs, players can use the patrol feature. However, it is important to note that it is a gridded sphere.

This means that if players go right from the furthest right area, they will enter the furthest left area. This principle applies to left to right, up and down, as well as down and up.