When enjoying the Arena feature in King’s Choice, you can either reject or accept a duel from another player.

Players are invited to assume the role of either a queen or king to become a powerful monarch in this adventurous mobile game, King’s Choice.

As the player, it is your responsibility to build an empire from scratch to become the ultimate ruler, and while your empire is growing, you can enjoy a variety of activities.

Some of the activities you can enjoy include, raising heirs, making vital decisions, recruiting knights, going on dates and defeating enemies among others. Even if these activities are tempting, it is advised that you focus on completing the main story arc.

One of the activities you can enjoy is the Arena, which features duels. Bear in mind that you can either accept or deny Duel Proposals.

Before you can participate in a duel, you have to recruit Knights. Each Knight in King’s Choice has 4 different attributes, each of which contributes to an aspect of your kingdom.

You will initially only have a few knights collected, however, there are several methods to obtain additional knights. Players will obtain additional Knights by increasing their VIP level, or by reaching a specific milestone in King’s Choice.

However, you can also unlock knights by progressing in the main storyline.

In order to discover how to unlock a specific knight, you can open their profile, which can be found in the Knight’s option on the main screen.

The Arena in King’s Choice allows players to duel other players’ knights. However, only knights who have reached level 60 can battle other Lords.

There are various modes in this activity, including Random Challenge, Announcement Challenge, Revenge Challenge as well as Pursue and Attack. In each round of battle, players can challenge the opponent’s 3 knights. 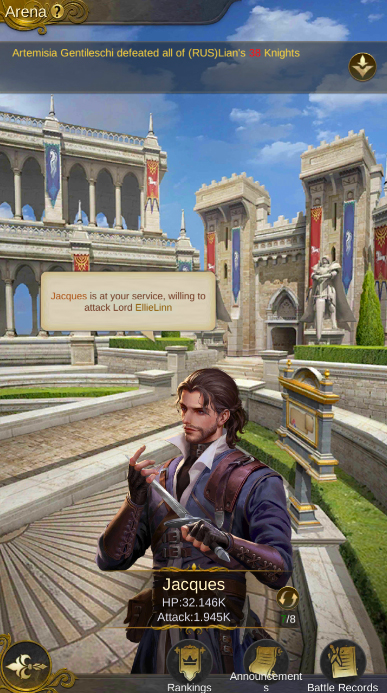 To initiate an Announcement or Revenge challenge, you must consume the Duel Proposal item. Your opponent then has the choice to either reject or accept your duel.

When you receive a Duel Proposal, you also have the right to reject or accept the duel. But keep in mind that every knight can only engage in 1 Announcement Challenge or Revenge every day.

It is advised that you reject the Duel Proposal if the opponent’s combat power is much higher than yours. Players can also reject the duel if their strongest knight has a cooldown. The cooldown has to finish before you can use that knight in battle again.

How to upgrade your Knights

It is crucial that you upgrade your knights, as they will become stronger with each upgrade. In order to upgrade a Knight, you have to select the Knight icon, which can be found in the bottom left corner. In the list, you can select the knight you want to upgrade.

Once you are in a Knight’s profile, you will discover 3 tabs, namely info, talent and skill. By selecting the info tab, you will be able to upgrade your Knight.

It is worth noting that upgrading your knights requires Silver. The higher the level of your Knight is, the more Silver is needed to upgrade him or her.

Can exiled knights participate in duels?

The Exile Plateaus function will become available once you have more than 30 knights in your collection. When a knight is exiled, he would not be able to participate in any battle, including duels. The exiled knight can also not be attacked by other knights.

Although there is a limited number of exile spots, players can purchase additional spots with gold. It is advised that you exile the Knights you use the least.

How many free challenges do players get?

King’s Choice players can challenge other Lords for free up to 4 times a day, but it is worth noting that there is a cooldown period of 1 hour. This means that after using a free challenge, you have to wait an hour before you can use another free challenge.