Genshin Impact features various quests, one of which is the O Archon World Quests, where players who complete all three will receive 20 Inazuma Experience Points.

Genshin Impact is a well-known open world, role-playing online video game. In the game, players are the Traveller from another word, who travels the world with their twin brother, or sister. However, they were separated from their sibling by a peculiar goddess, who banished them to the world of Teyvat.

After players awake from their ordeal, they are greeted by a cheerful, fairly-like creature called Paimon. The creature agrees to guide the players through Teyvat. Over the course of the narrative, players come into contact with people, who each have unique abilities and skills. Players should note that these people will either join them on the quest to find the missing sibling or hinder them on that quest.

The fictional world of Teyvat has seven distinct regions, but only some are currently explorable. Players should remember that these regions influence the narrative and how they progress through the endgame. Genshin Impact’s developer, MiHoYo Studios plans to introduce the remaining regions in the updates over the next few years. 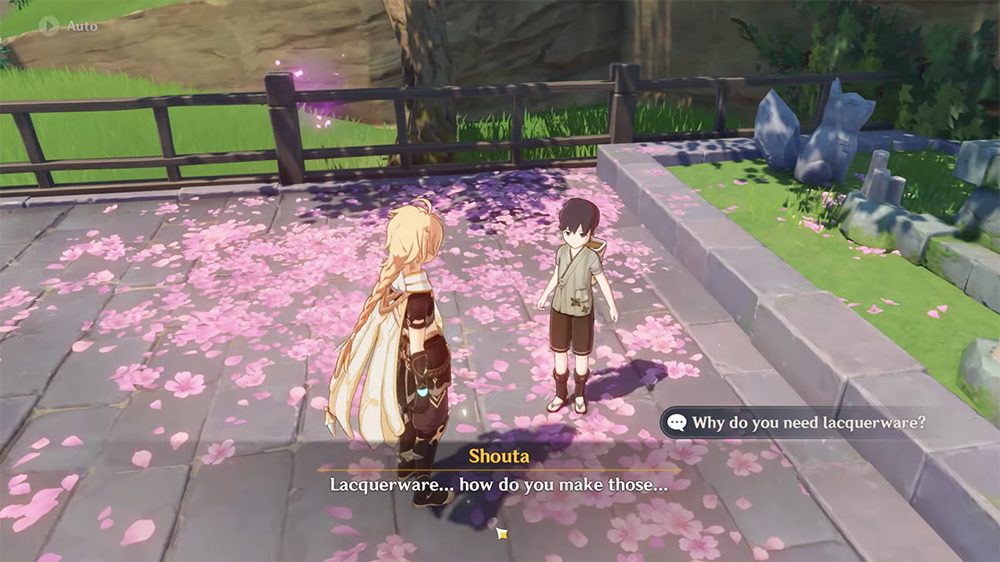 The game allows players to control one of four interchangeable characters in a party. However, switching between characters can be done very rapidly on the battlefield. This allows the players to use several different combinations of attacks and skills.

All across Teyvat are challenges and bosses that reward valuable resources, such as Electro Hypostasis and Stormterror. However, claiming these rewards uses a currency called resin, which regenerates over time. Completing the challenges and defeating the bosses grants players progress towards their Adventure Rank.

Players will then be able to unlock new challenges and quests as they increase the World Level. The World Level is a measurement of how strong the enemies and monsters within the world are. Additionally, it refers to the rarity of rewards that defeating them gives.

One of the various activities that players can do in the game is questing. The game features a main questline, which players can complete to receive various rewards. However, there are also side quests in Genshin Impact. Players can choose whether or not they want to complete the additional quests. 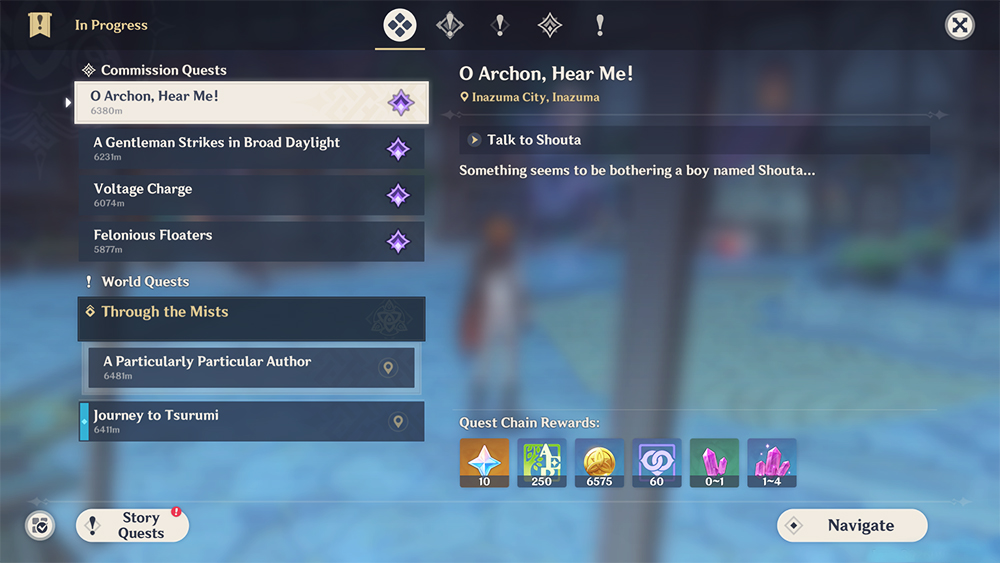 Even though the side-quests do not form part of the main story quest, it does offer the player more rewards when it is completed. It is thus recommended that they do some of the side quests to receive additional items and perhaps the in-game currency.

Inazuma brings many chain quests where players will need a lot of luck to complete a certain World Quest. One of them, Oh Archon, consists of three distinct quests. Players should remember that completing these quests may take some time. The first quest is Oh Archon, Hear Me!, while the second is O Shrine, Show Your Power Once Again! The questline concludes with Oh Archon, Have I Done Right?. 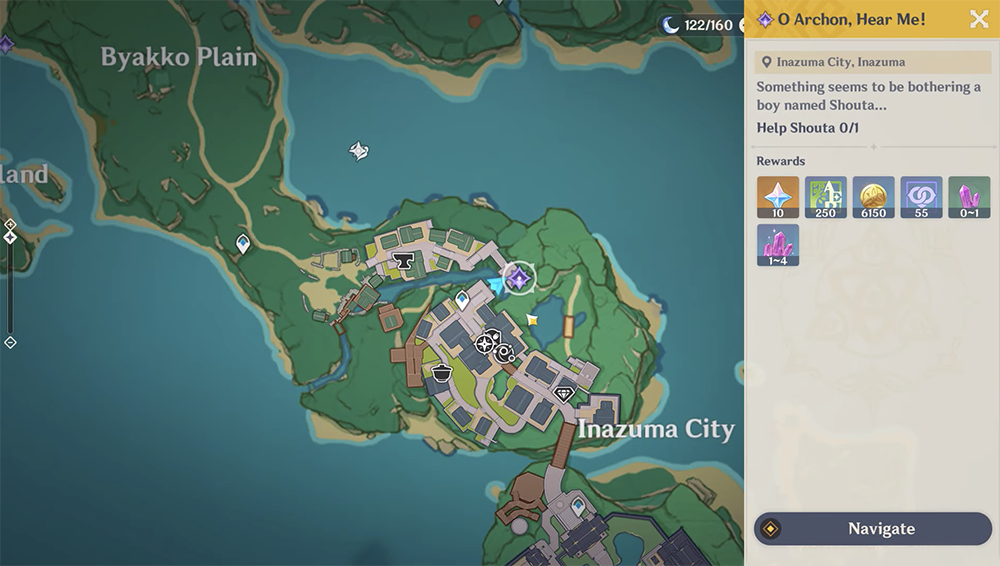 It is important to note that Oh Archon, Hear Me! and its subsequent quests are Daily Commission quests. It can thus only be obtained through the Daily Commissions. Obtaining the quest depends entirely on the player’s luck, as it is randomly available.

When players have obtained the quest, they will have to talk to Shouta. After the conversation, the quest will lead them to talk to Yayoi Nanatsuki. Players should note that the dialogue options are not important, as the outcome is the same.

After talking to both non-player characters (NPCs), players should head back to the shrine. Shouta will then ask them what to offer to the shrine. Players can either choose Tricolor Sachets or Dango. It is recommended that they choose the Tricolor Dongo, as it forms part of the next quest.

Choosing the Dango option will trigger an investigation spot to spawn next to the shrine on the next real-time day. It is recommended that they interact with it, as it is a requirement for the O Shrine, Show Your Power Once Again! quest.

It is important to note that the rewards depend on players’ Adventure Rank. However, they will receive the same rewards, the amount of the resource will differ. Players will receive the following rewards for completing Oh Archon, Hear Me and O Shrine, Show Your Power Once Again:

When players complete the Oh Archon, Have I Done Right! quest, they will receive 20 Inazuma Experience Points. These points will increase their reputation in Inazuma. 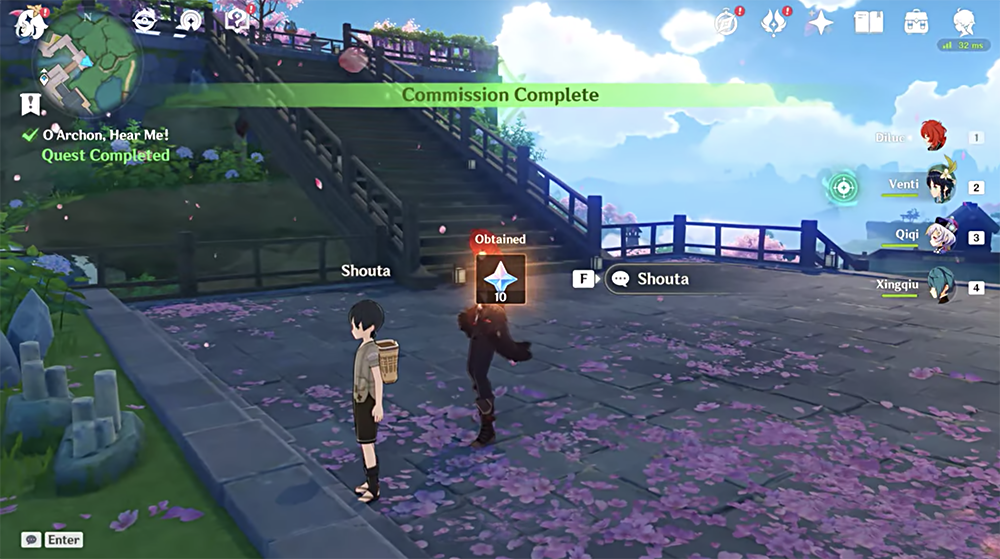 Genshin Impact is a popular, open world video game. It offers players a variety of activities to participate in, one of which is questing. It is important to note that there are different types of quests, including the main story quest, side quests and World Quests, among others.