In Genshin Impact, players can complete various challenges to obtain rewards, one of which is the 9 Cube Puzzle, located on Watatsumi Island.

Genshin Impact is a popular open world, role-playing online video game. In the game, players take on the role of the Traveller from another world, who travels the world with their twin brother, or sister. They were separated from their sibling by a peculiar goddess, who banished them to the world of Teyvat.

When players awaken from their ordeal, they are greeted by a happy, fairly-like creature called Paimon. The creature agrees to guide players through Teyvat.

Over the course of the narrative, they discover people who each have unique abilities and skills. Players should note that these people would either join them on the quest to find the missing sibling or hinder them on that quest.

The fantasy world of Teyvat has seven distinct regions, but only three of them are currently explorable. Players should remember that these regions influence the narrative and how they progress through the end-game.

Genshin Impact’s developer, MiHoYo Studios, plans to introduce the remaining regions in the updates over the next few years. 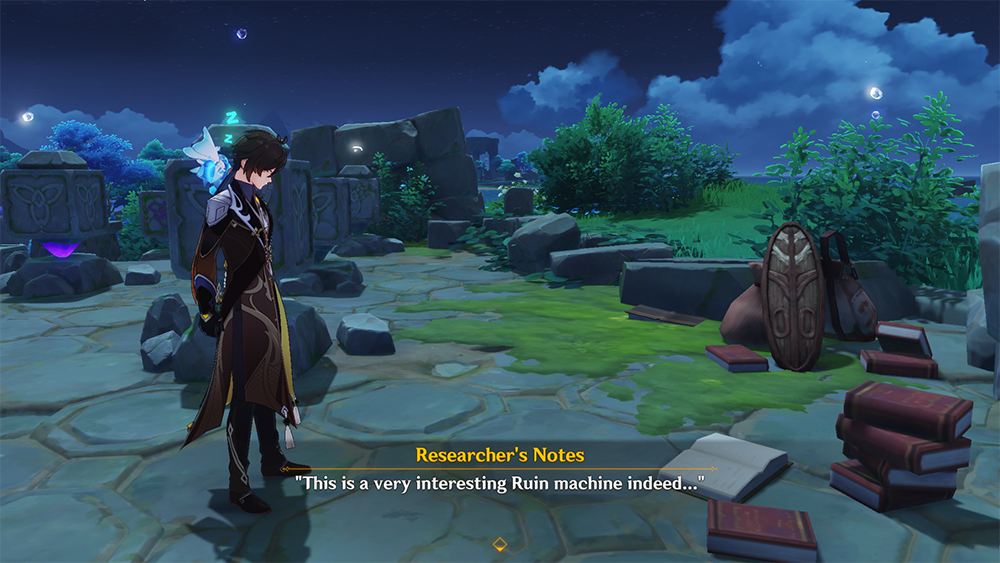 The game invites players to control one of four interchangeable characters in a party. However, switching between characters can be done very quickly during combat. This allows the players to use several different combinations of attacks and skills.

Players can use their party to not only explore the world, but also attempt various challenges to receive special rewards.

All across Teyvat are bosses and challenges that reward valuable resources, such as Electro Hypostasis and Stormterror. However, claiming these rewards uses a currency called resin, which regenerates over time.

Completing the challenges and defeating the bosses grants players progress towards their Adventure Rank.

With a higher Adventure Rank, players can unlock new challenges and quests to increase the World Level. The World Level is a measurement of how strong the enemies and monsters within the world are. Additionally, it refers to the rarity of rewards that defeating them gives.

One of the challenges in Genshim Impact is the Cube Puzzle. It is important to note that the puzzle is a random challenge that players can take part in.

This means that there is no quest linked to it and that players do not have to be a specific Adventure Rank to complete it.

Where is the 9 Cube Puzzle located?

Players can find the 9 Cube Puzzle on Watatsumi Island in-game. The following image indicates the location, in a red circle, on the map: 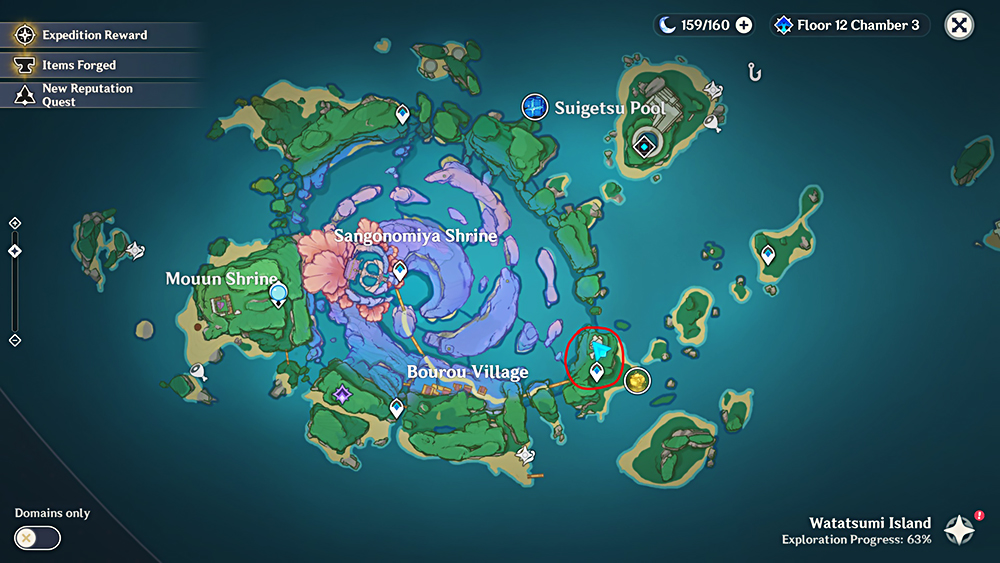 At the location, players will receive a hint to make the puzzle easier. The hint states, “This is a very interesting Ruin machine indeed. I shall assign a number to each of these cubes’ positions.

One shall be North, East shall be two, South three and West four. Adding on another four for those cubes with floating stone slates on them, gives us five through eight.”

The hint continues, “The sole empty position shall be nine, thus making up our nine-slotted puzzle. The lights on the stone do not seem to mean much. Now, let’s try to make the sum of the numbers along the horizontal, vertical and diagonal lines the same. And eureka, I have solved it! Well, that is another entry for my thesis. I should continue West and see if there are other ruins.”

Players should note that the puzzle is made up of a three-by-three gird, which totals nine spots. There are eight cubes and one empty spot.

It is also important to remember that there are two different kinds of cubes, plain cubes and cubes that have little hats on. The following image indicates what a plain cube looks like: 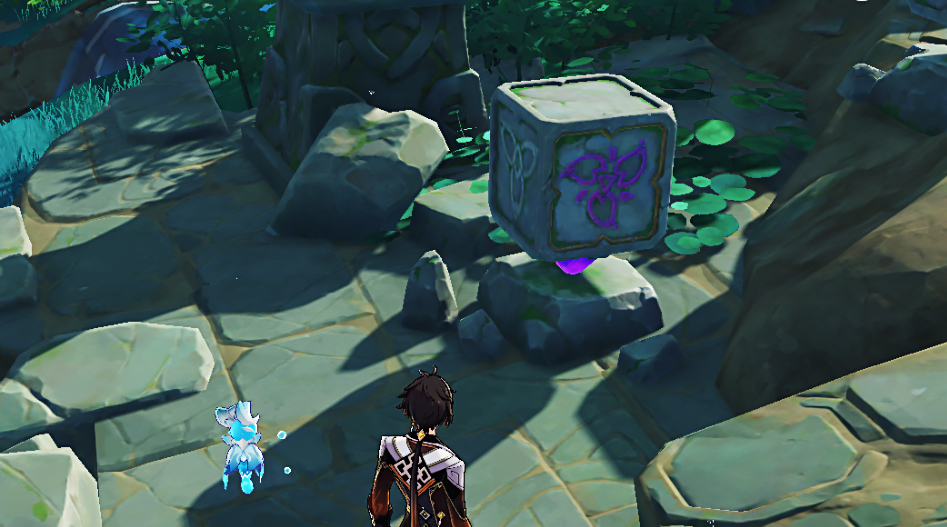 The following image indicates the second type of cube: 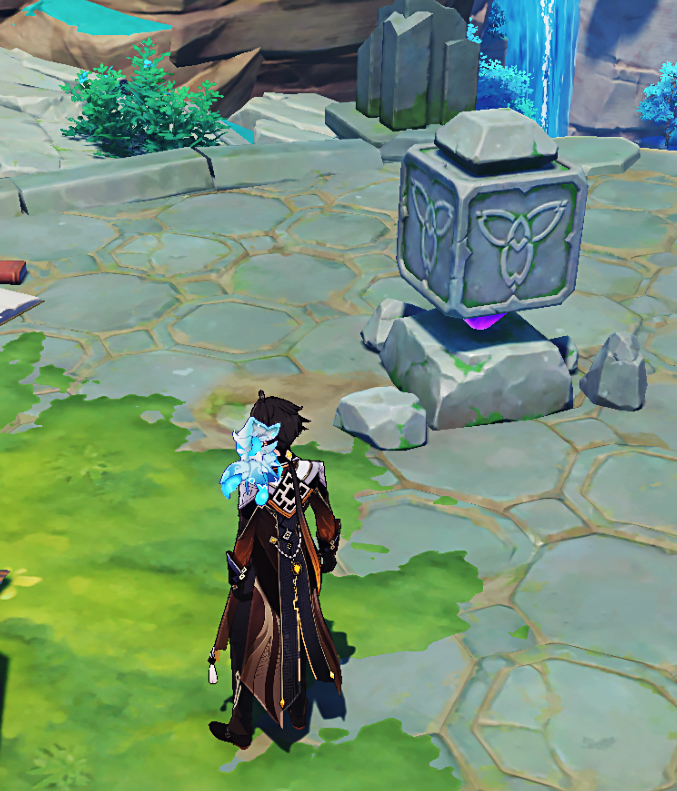 There are four directions for each cube: North, East, South and West. Players can change the direction by hitting the cube with their weapon. However, if it does not move, the cube and number have been set and cannot be changed.

For the plain cubes, players can set them as follows:

For the hatted cubes, players can set them as follows:

To make it easier, players can use the mini map, as it shows the directions. Additionally, they can also use their hint notebook.

Players should remember that the empty spot is representing number nine. The goal for each puzzle is to make each vertical, horizontal and diagonal row add up to the same number. Even though the game does not mention the number, it can be worked out to be 15.

The following images indicate the solutions for the first puzzle: 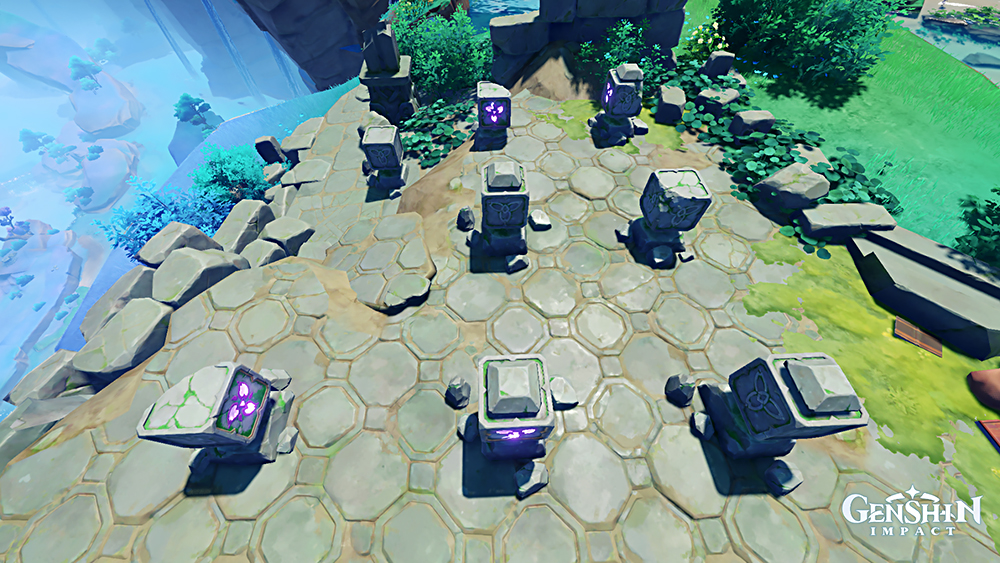 It is important to note that the purple design face of the cube is where the arrow points. However, the following image is a simplified version of the solution: 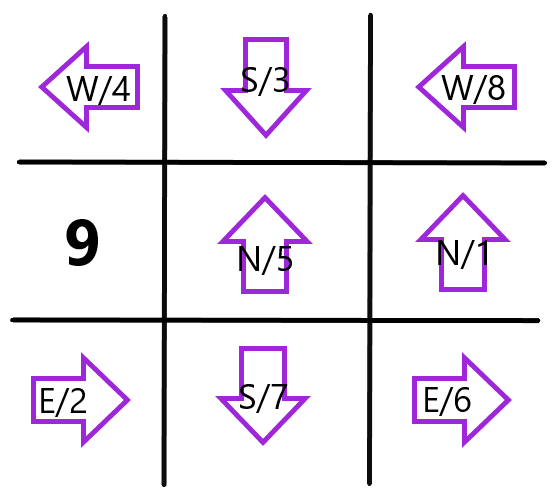 It is recommended that players teleport out of the area after solving it, and return. Paimon should then mention that the cubes have changed. This means that players can now solve the second puzzle.

The following image indicates the in-game solutions for the second puzzle: 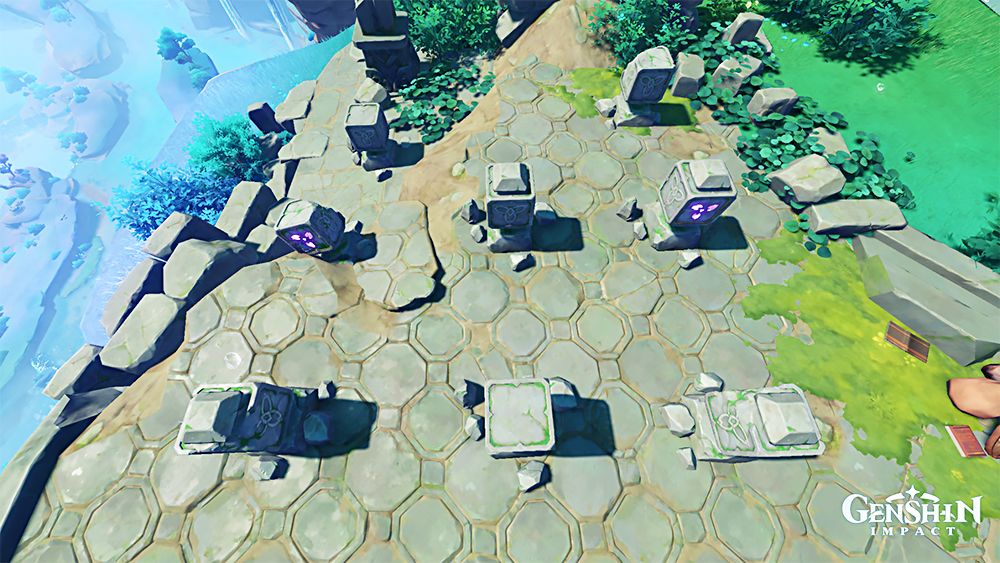 The following image is a simplified version: 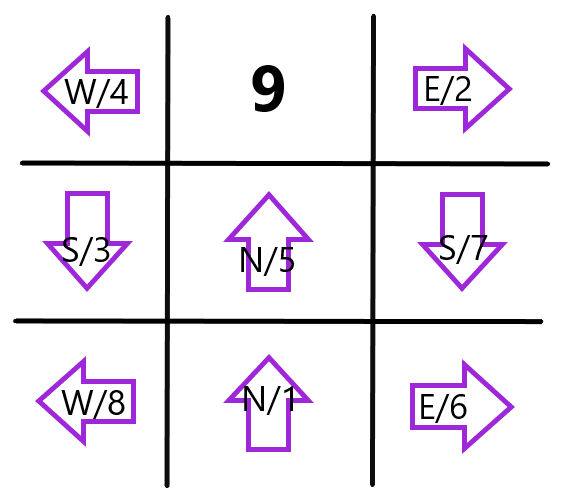 Rewards for completing the first and second puzzles

The following image indicates the rewards for completing the first and second puzzles: 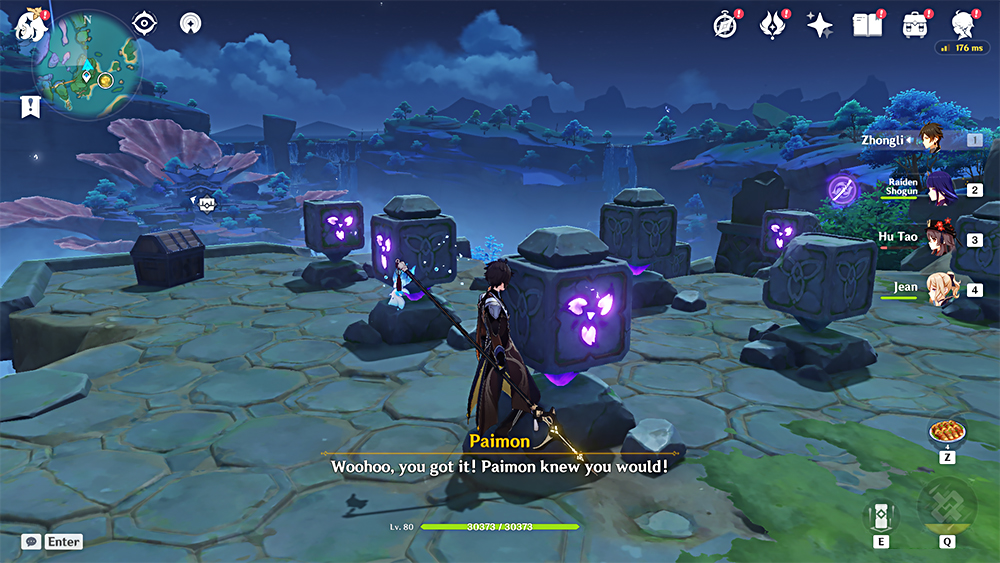 After completing the second puzzle, players will have to teleport out of the location, and return again. They will then be able to complete the third puzzle.

The following image indicates the solutions for the third puzzle: 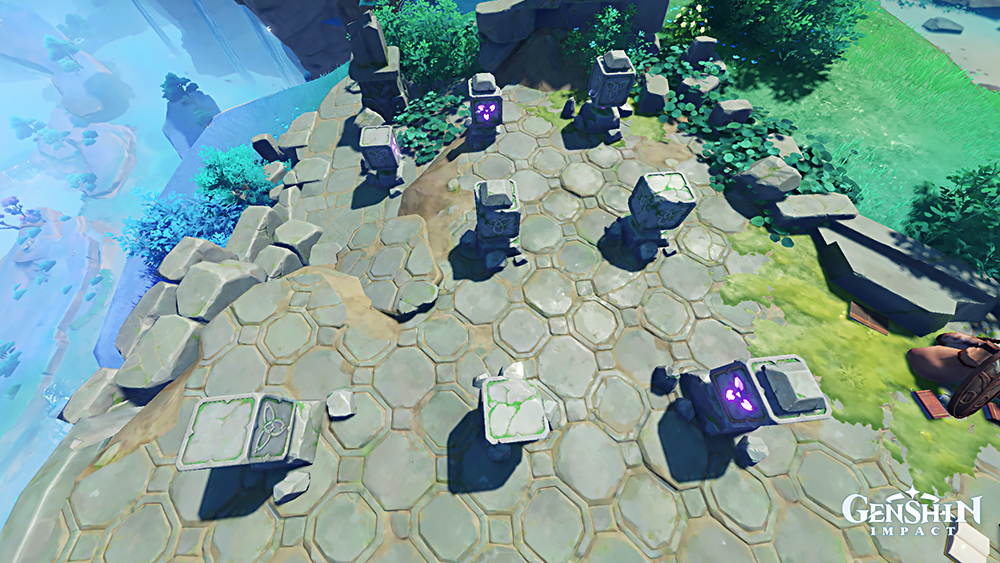 The following image indicates a simplified version of the solution: 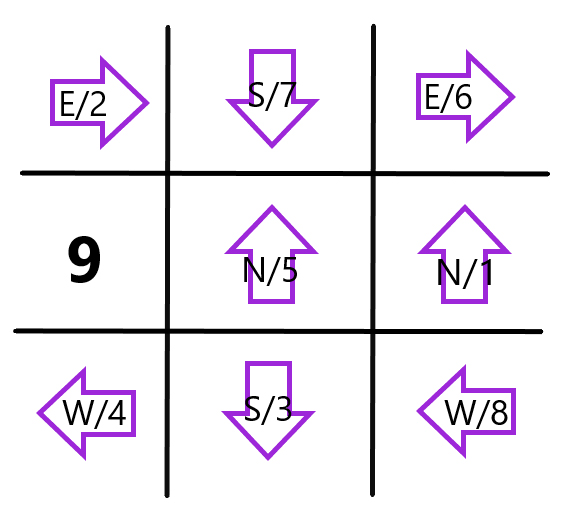 If players successfully complete the final puzzle, they will receive various rewards. Players will receive a precious chest as a final reward, which contains various items, Primogems, resources and gear, among others.

In Genshin Impact, players can defeat bosses and participate in various challenges to receive various rewards. One of the challenges players can complete is the 9 Cube Puzzle.

To be successful in this puzzle, players will have to ensure that each vertical, diagonal and horizontal row adds up to the same number.