In Final Fantasy Tactics: The War of the Lions, players can create armies, where each fighter has a specific job and there are 22 jobs to pick from.

Final Fantasy Tactics: The War of the Lions is a turn-based, tactical role-playing game. It was initially developed and published by Square Enix for the PlayStation Portable (PSP). However, it was later released on both the Android and the iOS operating systems. It’s the second game in Square Enix’s Ivalice Alliance series of video games, and thus, it is set in the fictional world of Ivalice.

The game’s description reveals that time’s river flows unbroken through the ages. In the torrent, myriad histories whirl. But how much of what they tell people is the truth? And how much truths are forever lost to the river’s flow?

In the days gone by, the War of the Lions rent the land of Ivalice in two, and it is on this land where two young men first stepped onto history’s stage. The first man is named Delita Heiral. He is a hero who would draw the curtain on the War of the Lions, the dark act of Ivalice’s history. The other, whose role is now forgotten, is a man named Ramza Beoulve.

Players can peer through the eyes of these two young men and uncover the secrets that lie hidden within history’s darkened folds. Players take control of the mercenary, Ramza, who finds himself involved in a civil war and an ancient evil that has begun to take over the world. A noble by birth, Ramza is forced to reconsider his opinion of commoners, as his lowborn best friends start a revolution against the ruling powers of Ivalice.

The War of the Lions follows a war between the Kingdom of Ivalice and its neighbour, Ordalia. The combat of the game is very similar to such, with each piece corresponding to a party member in Ramza’s current roster of fighters.

Each fighter can move on the grid-like board, in accordance with their move allocation. It is important to note that the terrain of each map dominates the mobility and the range of the warriors. However, Ramza’s soldiers can each take on a job in the Final Fantasy tradition.

The War of Lions Jobs

Players can obtain experience and job points when they fulfil actions during a battle. Players should be aware that they can use the job points to purchase new abilities. There are currently 22 jobs available in the game. 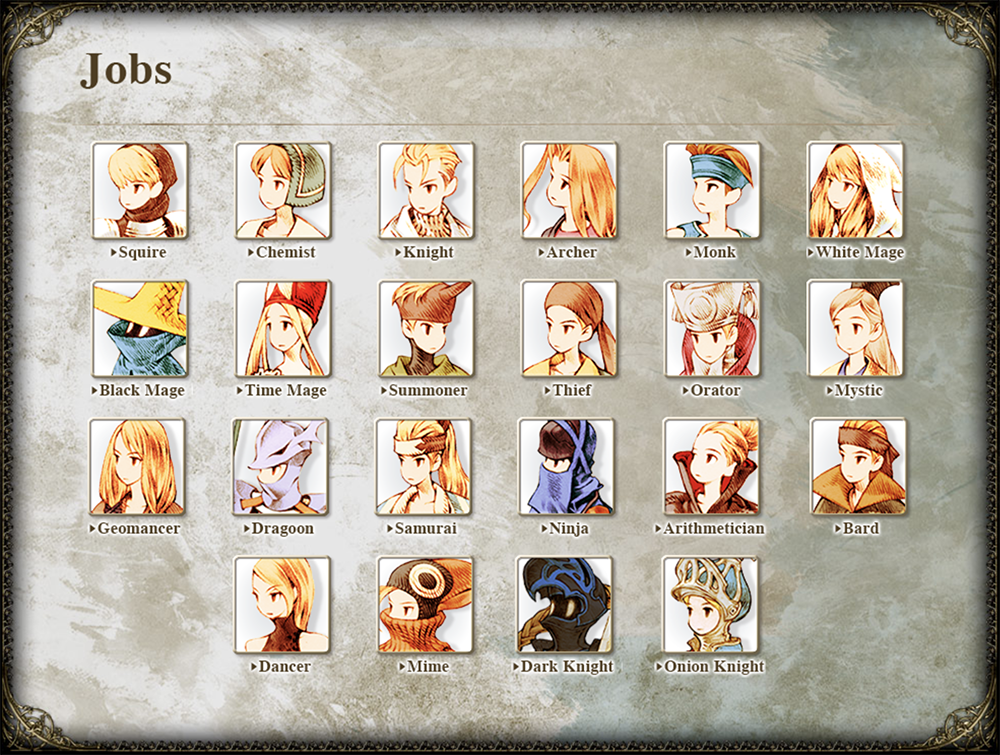 It is important to note that the Squire is a starting job class. This means there are no requirements to start this job. It serves as the foundation for all others. It is seen as a unit’s first step on the round to become a mighty warrior. Squire skills are the most basic of combat techniques, and they are invaluable to any aspiring soldier.

Similar to Squire, Chemist is also a starting job. Fighters in this job are warriors knowledgeable in the use of restoratives. They employ various potions and tinctures to remove status ailments and restore health to wounded team members.

Once players reach level two in the Squire job class, they can either become a Knight, or an Archer. Knights are warriors both pure of spirit and strong of arm. They are mighty champions and valiant defenders of the weak. Knights have access to a variety of skills, that can be used to weaken and defeat foes.

While Archers are warriors who use their hawklike vision to launch ranged attacks. These fighters use their aim ability to carefully focus before losing an attack to deal damage.

If players reach level two in the Chemist tree, they can choose to become either a White Mage or a Black Mage. The White Mages fill a crucial support role on the battlefield. They have the ability to heal and protect their allies. Additionally, White Mages can revive the fallen.

Black Mages are versed in destructive black magic. They are capable of unleashing raw elemental energy. Additionally, they can neutralize even the deadliest of enemies.

When players reach level three in the Knight job, they can become a Monk. They are martial artists who push both mind and body to the limit with harsh training. It is believed that their fists are the match of any sword, while their minds are even sharper.

When players reach level three in the Archer job, they are able to become a Thief. They are quick of finger and light of foot. Thieves are able to steal from foes and poach monsters. Additionally, they can use their uncanny reflexes to avoid danger.

If players reach White Mage level three, they are able to become a Mystic. They are able to manipulate the mystic weave to inflict harm on both the minds and the bodies of their enemies.

Once players reach level three in the Black Mage class, they can take on the Time Mage job. They are capable of manipulating time and space. It is believed that they bend the laws of the universe in order to grant an advantage to their allies in battle.

In order to become a Summoner, players have to reach level three in the Time Mage job. These mages use their knowledge of the spirit plane to call powerful espers to do their bidding. It is believed that Summoners are versatile units, as they are capable of filling offensive and defensive roles.

It is important to note that players can take on the Orator job when they reach Mystic level three. Orators are warriors who age war with words. They are able to intimidate foes or even convince them to change sides.

When players reach Monk level four, they can become a Geomancer. They are unique warriors who use the land as their weapon. Geomancers are able to turn natural features of the terrain against their foes.

Players who have reached level four in the Thief job can become a Dragoon. These warriors have learned the ways of the wyvern Wearing the heaviest of armour. Dragoons can vault high into the air to deal devasting strikes from above.

It is important to note that players must have level four in Knight, level five in Monk and level two in Dragoon to become a Samurai. They are masters of warfare who seek perfection in swordplay. Samurai’s Iaido skills allow them to unleash a spiritual energy contained within katana.

Players who want to take on the Ninja job should be level four in Archer, level five in Thief and level two in Geomancer. Ninjas are warriors of the shadow, and they are infamous for operating with little regard for life. Fighters in this class have the ability to throw weapons at foes.

The job requirement is White Mage level five or Black Mage level five, and Time Mage level four or Mystic level four. Arithmeticians employ the principles of arithmetic law to pinpoint targets for their attacks. They are capable of casting all manner of magics, however, they are bound by a few of the normal limitations.

Players should be aware that only male fighters can become a Bard. Additionally, the fighters need to have Orator level five or Summoner level five. Bards are warriors whose weapon is music. They take a less direct role in combat, as they support and inspire their allies with verses.

It is important to note that only female players can become a Dancer. However, the job requirements are either Geomancer level five or Dragoon level five. These women dancers are not just for mere performance, but a means of magical energies that lie dormant in their flesh. It is believed that the entrancing moves often lead to their foes’ undoing.

Players who want to become a Mime should be level eight in Squire or Chemist, and level five in Geomancer, Dragoon, Orator and Summoner. Mimes are mysterious warriors who have mastered the art of mimicry. They can thus copy allies’ actions in combat.

Players should be aware that the Dark Knight job class is very exclusive and that is has a lot of requirements. Players should have 20 kills and have the Knight and Black Mage jobs mastered. Additionally, players need to have level eight in Dragoon, Samurai, Ninja and Geomancer.

It is believed that these fearsome fighters have sealed pacts with the forces of darkness. They often offer up much of the gruelling quests to achieve greater power. However, they are rewarded with the ability to forfeit their own life energy to fuel their blades.

Similar to the Dark Knights, Onion Knights are also very exclusive. However, it only requires level six in Squire and Chemist. Even though Onion Knights are capable of using large and small equipment, they lack a true distinguishing specialty. It is important to note that the path to power is a long and perilous one, but the rewards that await those who preserve until the end are unknown.

In Final Fantasy Tactics: The War of the Lions, players are able to create armies to defeat enemies in the turn-based battles. However, players are able to choose their fighters’ job classes. It is important to note that there are 22 jobs in the game, and each feature their own abilities. Some of the advanced jobs feature some requirements. Players can thus only take on the jobs if they meet all the requirements.