In Final Fantasy XV, players can complete various quests, including the Berried Memories quest which requires Ulwaat Berries to complete.

Final Fantasy XV is a popular open world action role-playing game developed and published by Square Enix. It is the fifteenth instalment of the Final Fantasy series. The game was initially released for PlayStation 4 and Xbox One in 2016. However, it was later released for Microsoft Windows and Stadia.

It is set in the fictional world of Eos, but aside from Insomnia, which is the capital of Lucis, all the world is dominated by the empire of Niflheim. He seeks control of the magical Crystal that is protected by the Lucian royal family.

On the evening of peace negotiations, Niflheim attacks the capital and steals the Crystal. Luckily, Notcis Lucis Caelum, heir to the throne, goes on a mission to rescue the Crystal. He later discovers his full role as the True King and is destined to use the Crystal’s powers to save Eos.

The game invites players to take control of the main protagonist, Noctis Lucis Caelum. Players are able to join him on his journey across the world of Eos. It is important to note that Noctis has three companions, Ignis, Prompto and Gladiolus. However, Noctis is the only character directly controlled by the player. Players can thus navigate Noctis through simple movement, jump over small obstacles, sprint and perform context-based actions.

After each battle, the characters can earn experience points. However, they do not automatically level up when a certain amount of experience points has been gathered. Players should thus go to safe zones called Havens, which are mainly inns or campsites.

When resting at night, each character will gain levels depending on the amount of experience points earned. If players are defeated in battle, all the experience points gained up to that point, since the last level up, are permanently lost.

It is important to note that activities in the overland earn characters Ability Points. These points can be spent on the Ascension Grid, which is the game’s levelling system. It is divided into skill trees called Astralspheres.

Each Astralsphere is sorted by type, being associated with combat, magic or passive skills. Spending Ability Points opens up nodes within the Astralsphere. Unlocking these nodes grants access to further nodes, which require higher amounts of Ability Points to unlock.

Lucis’ kingdom is a large connected landmass that can be explored by foot. Additionally, players can use a car named Regalia or Chocobos, which are recurring galliform birds in the Final Fantasy franchise. It is important to note that both the Chocobos and the Regelia can be customized by the player.

The Chocobos can even join players in battles if their connection is good enough. While these birds are controlled manually, the Regelia can either be automatically or manually controlled. Players are also able to fast travel to unlocked areas on the world map if they do not wish to use the car or birds.

It is important to note that the Regalia must be refuelled at petrol stations from time to time. In the game, players are able to visit a variety of towns, where they can stay in hotels and purchase items from the shops. However, players will need the in-game currency, gil, to buy items.

Players will also find non-playable characters (NCPs) in the towns. They tend to provide information on quests, from main story missions to side-quests. Side quests can also be picked up from some of the NPCs in the towns.

Players should be aware that during some of the story sequences, dialogue choices will appear for Noctis. The selected option will change the response from the NPCs. Final Fantasy XV contains two difficulty modes, and players can switch between the two.

As mentioned above, players are able to complete the main storyline and additional side-quests. One of the quests they can complete is the Berried Memories quest. To complete this quest, players need to obtain some Ulwaat Berries. It is a type of strawberry from Ulwaat that is very rich in vitamins. However, obtaining these berries can be very difficult. 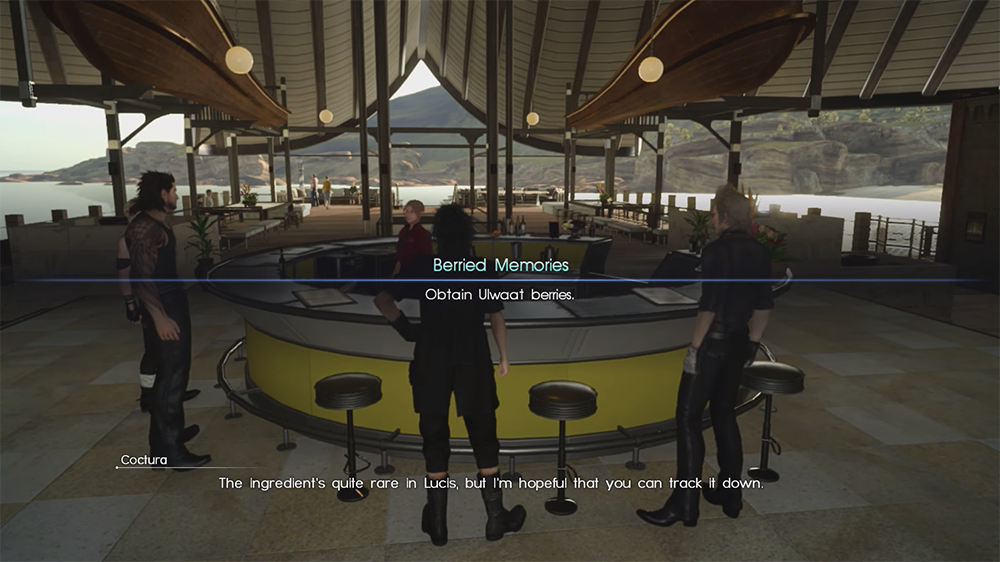 To obtain this quest, players must speak with Cocture, the chef at the Galdin Quay restaurant. She will ask players to obtain some Ulwaat Berries. It is important to note that there are not any specifics about when the quest becomes available to players. However, many believe that it can appear at any time after players first visit to the Galdin Quay.

It is thus advised that players go to the Galdin Quay every few days to see if Cocture has the quest available at the moment. When they have picked up the quest, they will have to continue through the game until they have obtained the quest, Brave New World. Players must make it to this point, as it is the only thing that will allow them to complete the quest. With the new quest in players’ journal, they can make their way to the house located near the lighthouse at Cape Caen. This area can be found along the southern edge of the map. 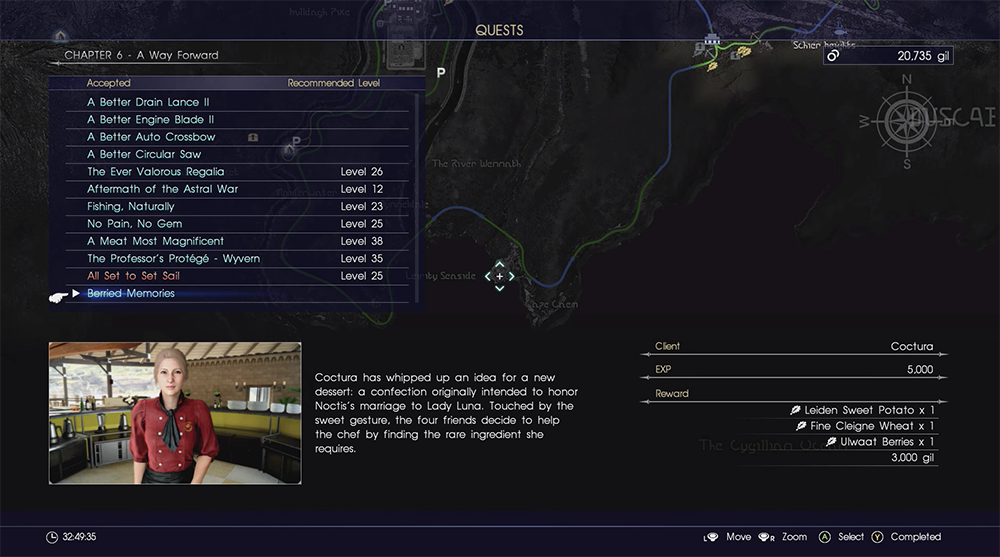 Players should look for a woman named Iris, and she is generally located on the porch of the house. One of the quest objectives states that players need to speak with her. During the conversation, they will have some response choices. It is advised that players choose the option to tend to the garden.

Players will be able to plant the seeds in the garden. After planting, they can leave the area and return the following day.

How to obtain Ulwaat Berries

When players return, they will be able to harvest the garden to receive five Caen Carrots. At this moment, a man named Tony, a fancy restaurant owner will arrive. He will offer the player some items in exchange for the carrots.

Players will be able to choose some weapons, car parts and most importantly, Ulwaat Berries. They can thus exchange the carrots for the Ulwaat Berries. However, players can also purchase additional items from Tony if they wish to do so.

When players have obtained the Ulwaat Berries, they should return to Galdin Quay and speak with Coctura. She will offer the player various rewards for completing the quest. Additionally, she will offer to cook the special item, Memory Lane Pastry, that she needed the berries for.

If players have 12 000 Gil, it is recommended that they buy the plate. This will unlock the recipe for Ignis’ cookbook. Players will receive the following rewards for completing the quest:

In Final Fantasy XV, players are able to complete various quests, including the main story line and additional side-quests. One of the quests players can complete is the Berried Memories quest. To complete this quest, players will have to collect some Ulwaat Berries.

Even though it is quite expensive, it is recommended that players purchase it as it unlocks a rare recipe. 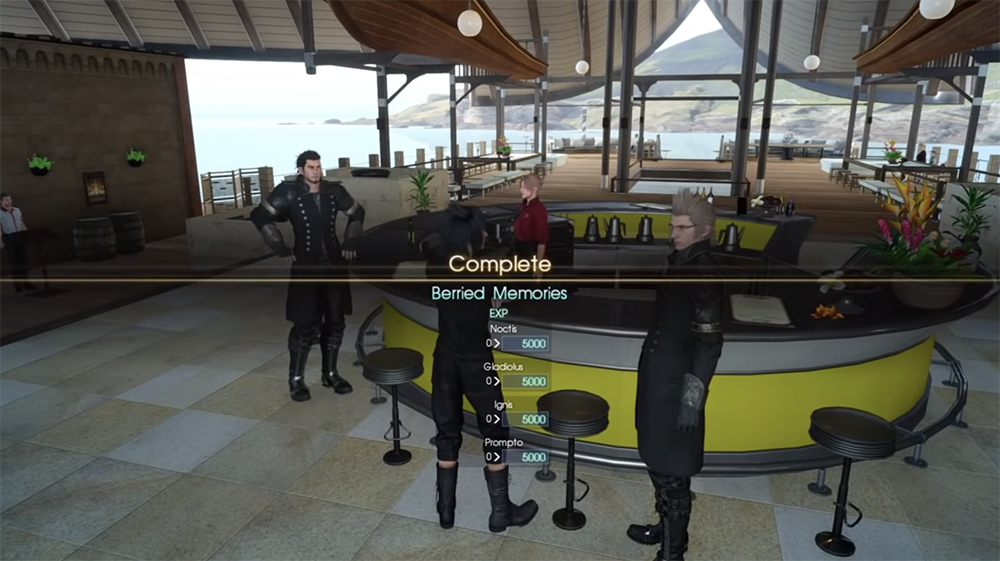