In Final Fantasy XIV, all new players will have to travel and explore on foot for the first few levels, as you can only receive a mount when you reach level 20.

Final Fantasy XIV (FFXIV) is a very popular massively multiplayer role-playing game. In the game, you can explore and discover various areas, complete quests, craft items and fight numerous monsters. The game allows you to interact with the environment, and with other players.

It is important to note that exploring the areas in the game may take some time, especially if you are running, or walking to all the different areas. Luckily, the game features various mounts for you to obtain.

Why are mounts important?

Even though mounts seem like a simple feature in the game, they can have an effect on your gameplay. It is believed that mounts make it very easy to explore, as the in-game areas are very big. Additionally, mounts are generally much faster than your character, which means it will take you less time to travel to locations.

Mounts can also give players a sense of achievement. This is because some mounts can only be obtained by completing specific quests. You will thus feel accomplished when you have collected the mount after hours of questing.

It is important to note that some mounts have the ability to fly. This means that you will not only save time traveling to other locations, you will also be able to skip combat on the ground entirely. Subsequently, you will travel much faster.

When do you get a mount?

As mentioned above, FFXIV features various mounts for you to collect. However, you will only get the opportunity to receive a mount when you reach level 20. It is important to note that you will have to complete a quest before you can obtain it.

As you progress in the game, you will be asked to join 1 of the 3 Grand Companies. You should remember that which company you want to join is entirely your decision. Additionally, the mount you receive does not differ.

After joining a company, you will get a company-specific version of a quest called “The company you keep”. Once you have completed the quest, you will join the ranks of the company.

You will now be able to complete various quests for them. It is important to note that you will unlock the company’s company, with which you can unlock the mount.

How to get the mount

One of the quests the company will offer you is, My little Chocobo. It is highly recommended that you accept this quest, as you will not be able to obtain a mount otherwise. To complete this quest, you have to give an item called a Chocobo Issuance to a non-player character (NPC) in your guild. 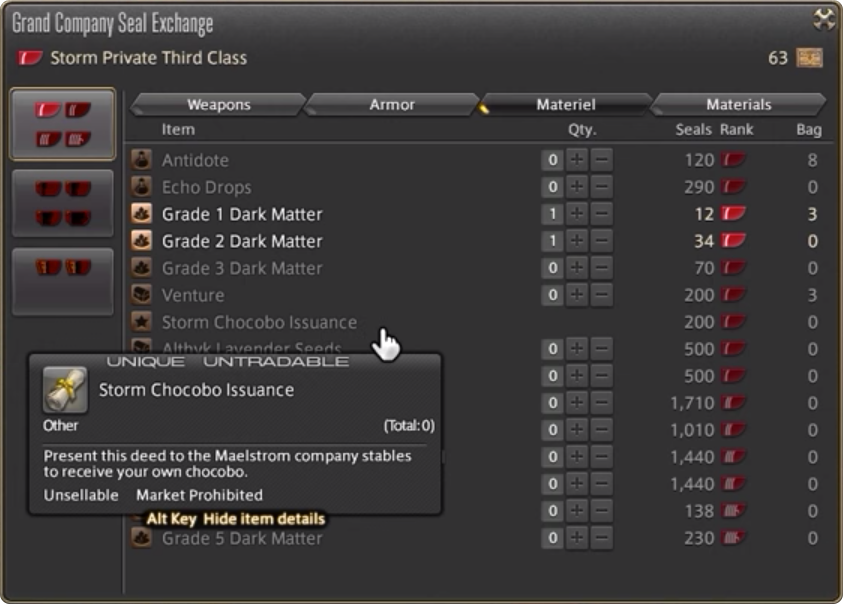 You can purchase this item from your Grand Company’s Quatermaster for 200 Company Seals. Once you have finished the quest, you will obtain the Chocobo Whistle as a reward. 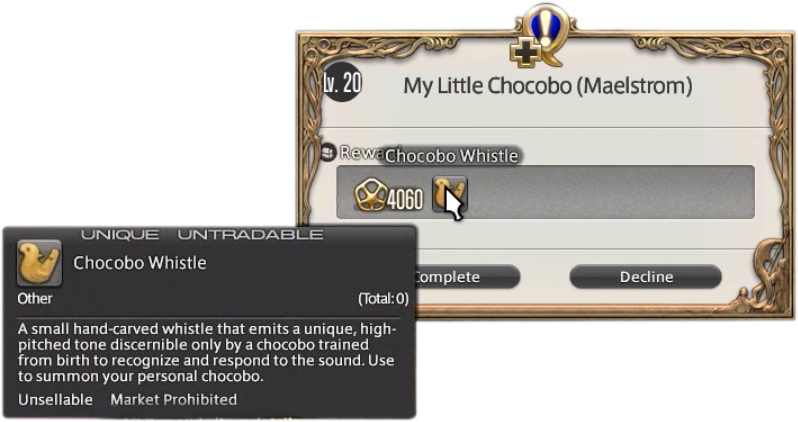 How to obtain Company Seals

As mentioned above, you will have to obtain 200 Company Seals before you can obtain your mount. Company Seals are a specific currency that allow you to purchase items unique to the Grand Companies.

You can obtain Company Seals by completing FATEs, Grand Company Levels and the Company Hunting Log. Additionally, you can participate in the Duty Roulette, complete certain quests and do expert and provision missions.

Does the Chocobo change or evolve?

Once you reach level 30, it is advised that you accept the quest, My Feisty Little Chocobo, because completing this quest will enable your mount to level up, learn skills and fight with you in combat. 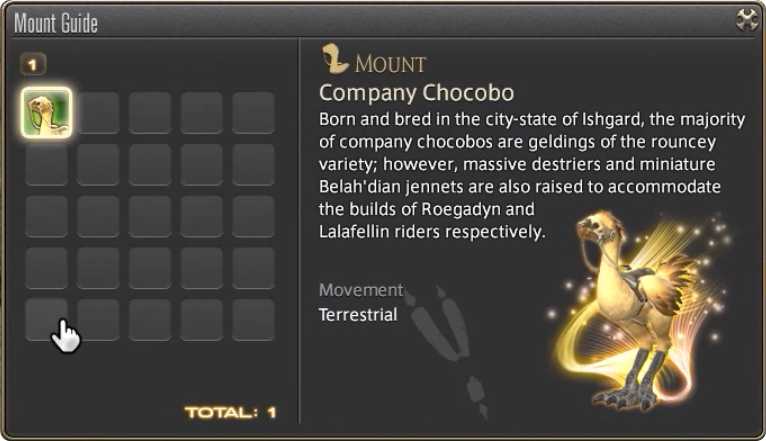 Final Fantasy XIV (FFXIV) is a very popular massively multiplayer role-playing game. In the game, you can explore and discover various areas, complete quests, craft items and fight numerous monsters. The game allows you to interact with the environment, and with other players.

It is important to note that you will have to travel and explore on foot for the first few levels. This is because you will only obtain your first mount when you reach level 20. Luckily, you will be able to unlock flying, combat and skills for your mount as you level up.