Final Fantasy XIV (FFXIV) offers players various mini games designed to give players a break from constant battle and complicated raids, one of which is Ocean Fishing.

Final Fantasy XIV is full of interesting little mini games designed to take players away from the status quo of complicated raids and constant battle. However, these mini games quickly become outdated and borderline irrelevant in a matter of weeks. But Ocean Fishing is the exception.

Even though it is not as popular as the day it launched, it is still by far the most efficient way to quickly grind to level 80 fishing. Even without an objective in mind, Ocean Fishing is a timeless Hydaelyn pastime that offers a welcomed reprieve from the hustle and bustle of life in Square Enix’s premium game.

What is Ocean Fishing?

Ocean Fishing is a short voyage on a purpose-built boat where 24 players work together to reel in all kinds of rare fish. This feature can be unlocked and explored as soon as the player picks up the class at the Fishing Guild in Limsa Lominsa. However, players will have the odds against them when it comes to rewards at the lower levels, but Ocean Fishing doubles as a great way to power level too.

Unlike battle classes in Palace of the Dead, Ocean Fishing stick to a very strict schedule. The boat sets off every two hours for a round trip, so players will have to level the conventional way between each if they are looking for the quickest way to a level 80 Fisher.

The rewards for Ocean Fishing depend on the character’s level. Before reaching the maximum level, the main appeal of Ocean Fishing is the foolish amount of experience points (XP) it awards not only with each catch, but when the points are added up at the end.

For level 80 fishers, Ocean Fishing rewards scrips, the end-game currency of the three gathering classes. How many points the player manages to score ultimately translates to how many Yellow Scrips the player earns at the end. However, small amounts of White Scrips can be obtained by catching rare fish.

Most players in the early days of the activity can be aiming for two specific rewards, The Hybodus mount and the Major General minion.

Every fish caught through Ocean Fishing can be framed and displayed in the player’s in-game house. However, bigger fish need bigger frames, and these can be bought with the yellow scrips earned during each run by interacting with the vendor on the dock.

The boat takes pre-determined routes through the ocean when it leaves the docks. These routes feature three of the four available spots chosen at random, meaning that there is a total of 15 different possible routes. The vessel spends approximately five minutes at each spot, with each housing different fish.

The player can check with the non-player characters (NPCs) by the boat to see which route it will take, before hopping on board. This is relatively important, as the player will need to use specific bait in each location to achieve the top score needed for the best rewards. Players do not need to worry about running out of bait, as they will be able to buy the majority of bait on the boat itself.

Obtaining a high score in Ocean Fishing depends on both strategy and luck. Using the right bait at the right time makes a big difference to the player’s score, but luck will ultimately play a part in the final score.

Instead of catching fish at random, it is best to aim for each zone’s “spectral” fish, so as to trigger a “spectral current”, which is an instance wide window which reduces catch times and causes rare fish to become very common. During these windows, it is easy to get high point counts. When a player targets a specific combination of fish in each zone, they can activate a personal Fisher’s Intuition buff, which eases the difficulty of catching five-star fish.

The bait and fish needed to trigger these windows differ with each zone, so players should familiarize themselves with the locations and switch baits as and when required,

Before the player dives into Ocean Fishing, they will need to stock up on bait. Players will be given Versatile Lure when they unlock the minigame, and these can be used by new fishers to grab quite a few of the fish available. However, the player will need krill, ragworm and plump word in order to catch the spectral fish. Most of the bait is available for purchase at the merchant on the docks. 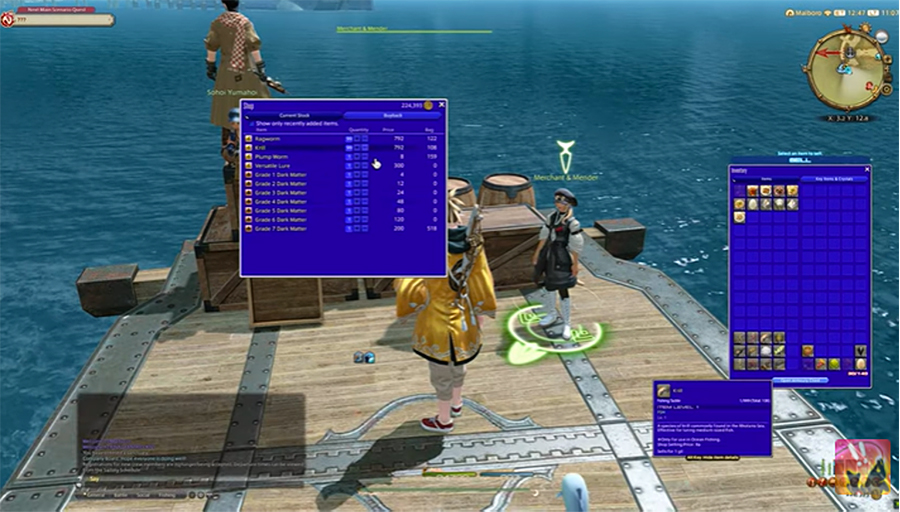 Higher level players can also consider buying Hi-Cordials and Peppered Popotoes as it may just make a difference in the fishing experience. Lower-level players will want to bring cordials, any food, company-issue survival manuals and any experience-boosting equipment to make the most of the potential experience point gains.

Which fish to catch for spectral currents

Despite having all this knowledge, a player can still have bad luck and not get any of the good fish. Players should remember to be patient and study up all the available guides, as they will eventually obtain the best rewards, as well as the maximum fishing level.