The expansions saw players slowly upgrading an extremely strong and majestic looking weapon. Even though there are better weapons to work towards now, players still want to craft their own Anima Weapon.

Before players begin the questline, it is important to note some baseline information that will help down the road. Firstly, crafting an Anima Weapon is not for the faint-hearted. This quest will involve grinding and players will have to invest a lot of time and materials.

Additionally, the weapon the player will receive and upgrade will be level 60. Currently, these weapons are very outdated, so most players use them for cosmetic purposes.

This weapon will also be job-specific, and each step will have to be repeated if the player wants to craft an Anima Weapon for a second job.

The player’s Anima Weapon journey will begin with a quest, An Unexpected Proposal. However, this quest has some pre-requisites: the player should complete the main scenario quest, Heavensward, and the character should be level 60.

To complete this quest, players should simply talk to Rowena in Idyllshire, then travel to the Alpha Quadrant in Azys Lla and speak to Ardashir.

Ardashir then gives players the Soul Without Life quest. This follow-up quest will task the player with gathering an Umbral and Astral Nodule. However, players can skip this quest by trading in a competed Zodiac Zeta Weapon for both Nodules.

If the player followed the Relic Questline from A Realm Reborn, the Zodiac Zeta weapon is the final, completed relic. If the player does not trade a Zodiac Zeta Weapon in, they will have to gather elemental crystals from Heavensward zones.

Where to find the crystals for the Astral Nodule

Where to find the crystals for the Umbral Nodule

After the player has gathered one crystal from each element, they can return to Ardashir, who gives the player a new quest, Toughening Up. This is the first quest that will take some grinding.

This quest will require the player to complete a total of 10 dungeons with their animated weapon equipped. The dungeons must be completed in the following order: Snowcloak, Sastasha, The Sunken Temple of Qarn, Keeper of the Lake, Wanderer’s Palace, Amdapor Keep, Dusk Vigil, Sohm Al, The Aery and The Vault.

After completing the 10 dungeons, Ardashir will give the player the Coming Into Its Own quest.

Coming Into Its Own

When the player gathered both tokens, they should take them to Cristiana in Mor Dhona to trade them for the weapon material. After the player traded each material, they should return to Alpha Quadrant and give them to Gerolt.

Next up, players should complete the Finding Your Voice quest. For this quest, players simply need to gather five Aether Oils, which can be done in two ways.

Firstly, players can complete the weekly quest, the Gift of Archmagus for one Aether Oil, or buy the oil for 350 Tomestone. However, the first option requires that players complete all three Crystal Tower series raids.

Thereafter, deliver the Pearls to Koh Rapntah. If the player does not want to spend their tomstones, the weekly quest is a better option.

Alternatively, if the player wants to get this quest over with as soon as possible, they can simply buy them for a total of 1750 tomestones.

For this quest, the player will be sent to Idyllshire to meet with Ulan. He will ask the player to gather Umbrite and Crystal Sand. These items can be obtained in various methods.

After the player reaches 120 points, there is a chance that the player will gain bonus treated Crystal Sand when converting it from crystal sand and Umbrite. The player should continue this quest until the 240 points have been obtained. 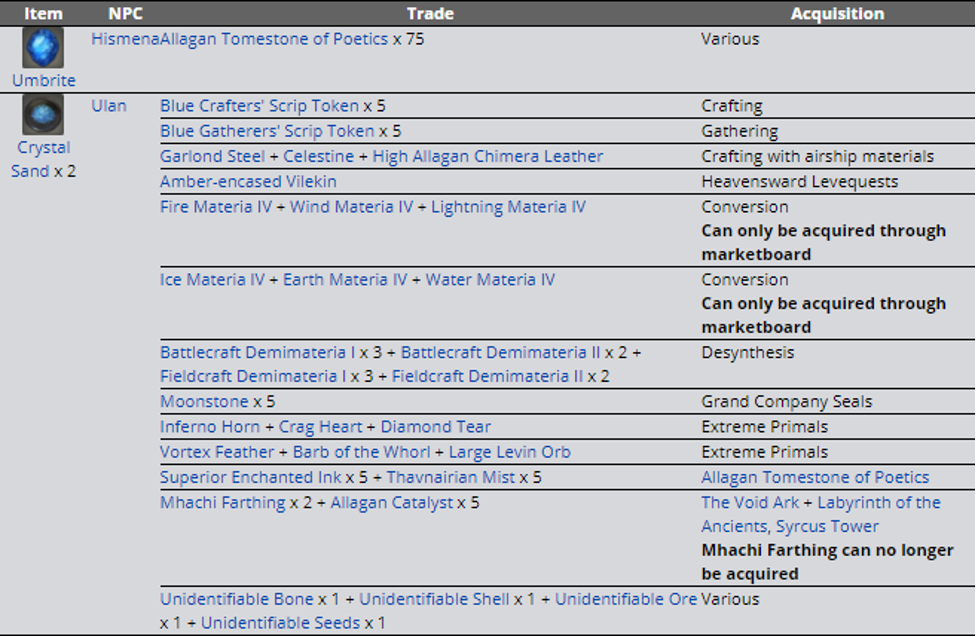 Players will then need to gather 50 singing clusters. Luckily, there are three options for gathering this item that can be completed in conjunction.

FFXIV player will then be asked by Ardashir to complete three dungeons. The dungeons are Sohm Al, The Great Gubal Library and The Lost City of Amdapor. After completing the dungeons, the player will need to speak to two non-player characters and complete their sub quests.

Luckily, this is an easy quest that will only involve the player going to Idyllshire to speak with Rowena. The player should then head back to Ardashir.

In another simple quest, Ardashir will send the player to speak with Rowena again. Thereafter, the player has to talk to Ardashir again.

This quest is the final step in the Anima Weapon questline; however, it would not be an easy task. This quest will take the player through every level 50 to level 60 hard trial. The player will have to do these trials with their Anima Weapon equipped.

However, the trials should be completed in a specific order:

After completing these trials, the player should return to Ardashir. He will ask the player to deliver an Archaic Enchanted Ink, which the player can buy for 500 tomestones. When the player delivers the ink to Ardashir, their Anima Weapon will be complete.