Evony players were able to acquire Zucca during the Legend of Kong event, but there is a possibility that they could also recruit him from the Tavern.

Evony: The King’s Return is an explorative video game that invites players to assume the role of a lord or lady in medieval times.

In addition to building your own empire from the ground up, you can recruit Generals, train troops, harvest resources, and defeat enemies. One of the Generals that you can acquire is Zucca, who is the greatest king of the Golden Empire.

Players can acquire 8 General rarity types in Evony. Allegedly, the higher the General’s rarity is, the better he or she will perform. A General’s rarity can be determined by looking at the border around their profile.

Additionally, you may find Purple Historic and Gold Historic Generals which are believed to be the strongest Generals in Evony.

In Evony, Zucca is considered the greatest king of the Golden Empire and therefore, he is known as the King of Thunder as well as the Almighty King.

During the Legend of Kong Event, players could  acquire this new Epic Historic General from the fifth package tier. 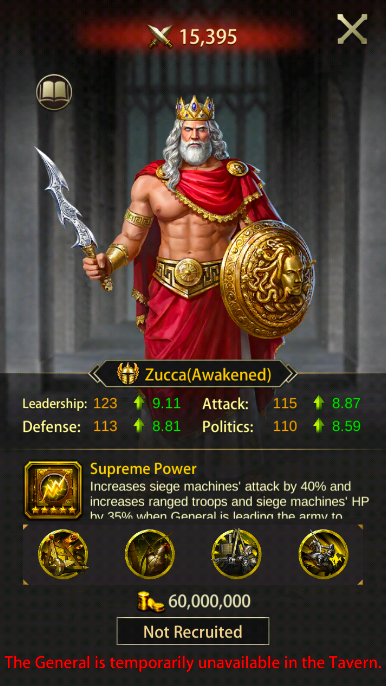 It is unknown whether you will be able to recruit Zucca from the Tavern, which can be found in your keep, or not.

You can find Zucca in the “Others” tab when you select the portraits option from the recruit menu. This might indicate that Zucca will be available for recruitment in the future.

Similarly to other Generals, Zucca has specific statistics that can affect your gameplay. The table below list Zucca’s base and growth statistics:

The growth rate indicates that Zucca’s statistics will improve when players upgrade him. In order to upgrade Zucca, you have to collect General Experience Point items.

Once you have the items, you can select Zucca in your collected Generals menu and upgrade his level by applying the experience points.

Moreover, you can enhance Zucca to increase his Star Level, though this process requires gold and medals. A General’s Star Level can be increased to a maximum of 5 Stars.

Keep in mind that the General must be on a certain level before their Star level can be increased.

On what level should Zucca be to increase his Star Level?

The higher the Star Level is, the more gold and medals you need to complete the process. The following table outlines the required level required items to increase Zucca’s Star Level:

It is noteworthy that Zucca’s special skill is always active, and it requires no development. Moreover Zucca can be ascended through the General Ascending feature.

This ultimately means that every ascended star level will add an additional buff to his special skill.

Supreme Power increases siege machines’ attack by 40 percent while ranged troops and siege machines’ health points are increased by 35 percent. However, this effect is only active when Zucca is leading the army to attack.