In Evony: The King’s Return, players can build an empire from scratch during medieval times.

In addition to creating an empire, you can recruit Generals, harvest resources, train troops, and defeat enemies. Players can also enjoy in-game events, one of which is the Truth Seeker event.

In-game events allow Evony players to experience the game in a new, thrilling way for a limited period of time.

When an event is active, you have to complete certain tasks or missions to receive valuable rewards. Sometimes, the rewards that you can obtain during an event can only be acquired from that specific event.

These occasional activities often motivate players to open and play Evony if they have been neglecting it for some time previously.

Some Evony events have corresponding themes, and others are considered collaboration events. For instance, Evony has recently collaborated with the classic movie, King Kong, and therefore, you can enjoy events which are based on King Kong in the game.

Truth Seeker is one of the in-game events in Evony that follows the King Kong Theme. The event has 2 categories, namely, Adventure Record and Skill Island Memories.

To access these activities, you have to open your Event Center and scroll the list to find the “Truth Seeker” tab. 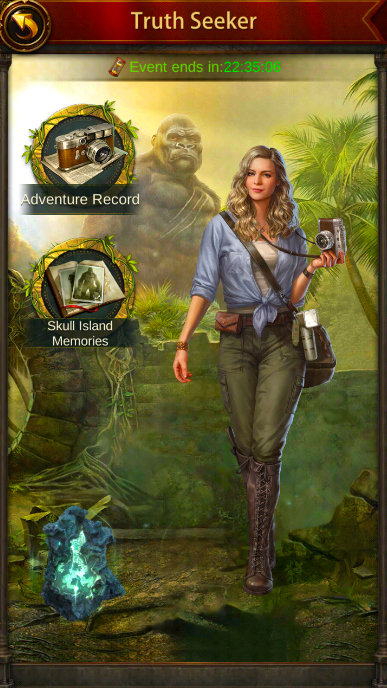 In the new menu, you can find the “Adventure Record” and “Skull Island Memories” tabs. However, at the bottom of the menu you will find a glowing, black item. After clicking on the item, the Friend of Kong, Mason Weaver, will appear.

Players can procure Mason Weaver while participating in the Adventure Record event. In order to acquire her, you have to collect Truth Pictures, which allow you to wish for Mason Weaver. If you do not get Mason Weaver after 240 wishes, she is guaranteed in the next wish.

Even if you do not receive Mason Weaver, you could receive other rewards, including resources, materials, food, and experience points, amongst other things.

After acquiring 3 of these items, you can compose them to craft an Iwi Chest. There are 10 levels of Iwi Chests, however, each chest requires specific items.

Once you have the necessary items, you can open the Skull Island Memories menu and compose your items.

In addition to Mason Weaver, you can get numerous rewards by making a wish in the Adventure Record event. It is noteworthy that each reward has a specific drop rate, which is indicated in the following table:

As previously stated, there are 10 levels of Iwi Chests, and each chest requires that specific items are composed. The following table lists which items are needed to craft a chest:

Mason Weaver is an investigative photojournalist and self-described anti-war photographer. She grew up taking photos with her camera.

Weaver has an interest in and respect for nature and because of this, she agreed to join Monarch’s classified expedition to Skull Island.

Similarly to other Generals in Evony, Mason Weaver has several abilities, which are outlined in the table below as follows:

In addition to these skills, Mason also has a special skill called Friend of Kong. This skill increases ranged troops and siege machines’ attack by 20 percent when she is leading the army.