In Evony: The King’s Return, Sun Ce is a Chinese military general who specializes in mounted player-versus-player and monster killing.

Evony: The King’s Return is an adventurous mobile game that invites players to assume the role of a lord or lady in medieval times.

It is your responsibility to build an empire from the ground up by constructing buildings, defeating monsters, and harvesting resources. To aid you in your task, you can recruit various Generals, one of which is Sun Ce.

Do you need Generals?

Although some players may think that Generals are a simple feature in Evony, they are actually a key component of the game. This is because you use Generals in everything you do, including building, crafting, fighting, and researching.

It is essential to know that certain Generals specialise in specific tasks. This means that one General can specialise in crafting, while another is very effective during a monster fight.

Players should therefore ensure that they use the correct General when doing tasks in Evony.

All Generals in the game have specific skills and abilities, which help them perform their duties. You can read more about a General’s skills in their menu.

Sun Ce is a Chinese military general and warlord who laid down the foundation of the state of Eastern Wu during the Three Kingdoms period. 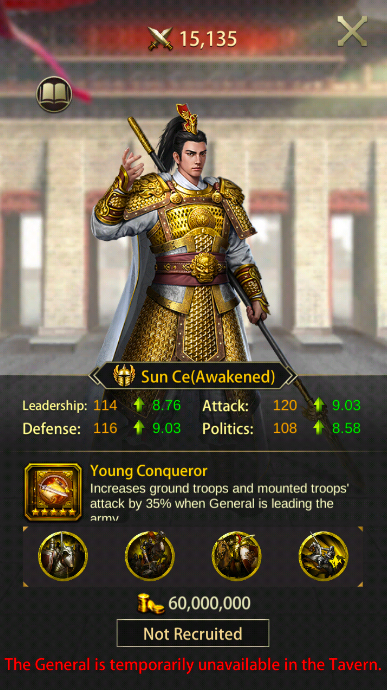 He is a great option for mounted player-versus-player battles, however, he can also be used for monster hunting.

All Generals in Evony have statistics that can be increased, which means that the General will become better at his or her task. Sun Ce’s statistics and growth rate are as follows:

It is noteworthy that every time you increase Sun Ce’s level, his statistics will increase. The amount it increases by is equal to the stats growth rate. However, the growth rate can also be further increased by enhancing Sun Ce.

Enhancing a General is the process of increasing his or her star level. In order to begin the enhancement process, you have to collect gold and medals.

Sun Ce’s star level can be increased to a maximum of 5 stars. However, Sun Ce has to be a specific level for a star increase to be done.

The table below lists the quantities of gold and medals required for Sun Ce’s enhancement:

When Sun Ce gains a star level, he will benefit from additional buffs. The table below lists which buffs he gains based on his star level:

Sun Ce’s special skill, Young Conqueror, is always active and requires no development. This skill increases ground troops and mounted troops attack by 35 percent. However, this skill only activates when Sun Ce is leading the army.

In addition to his special skill, he also has the following abilities:

It is imperative that you equip Sun Ce with the correct skill books and equipment, as the wrong skill books will hinder his performance in battle. The table below lists Sun Ce’s builds in Evony: