During Evony: The King’s Return’s General Portrait Exhibition event, you can redeem Generals in exchange for General’s Invitations.

In Evony: The King’s Return, you can assume the role of a lord or lady in medieval times. You have to build an empire from the ground up, and while constructing your keep, you can enjoy several activities and in-game events.

One of the events that you can enjoy is General Portrait Exhibition, for which you need General Invitations.

What is the purpose of in-game events?

During an in-game event, players get to experience Evony in a new, explorative way for a limited time. These occasional activities often motivate players to reopen and play a game that they may have been neglecting for some time previously.

While an event is active, you have to complete specific activities to be rewarded with valuable items. Sometimes, the items that you can earn from an event can only be earned from that specific event.

It is therefore recommended that you try to participate in every in-game event, but, needless to say, this is not always possible.

Evony’s events occasionally have themes that correspond to real-life events. However, the game’s developer, Evony, also creates new themes to promote the events.

In August 2022, Evony launched a new event, General Portrait Exhibition. For as long as the event is active, players can acquire Historic Generals. You can also get General’s Invitations from the Server Monarch Competition and Activity Chests. 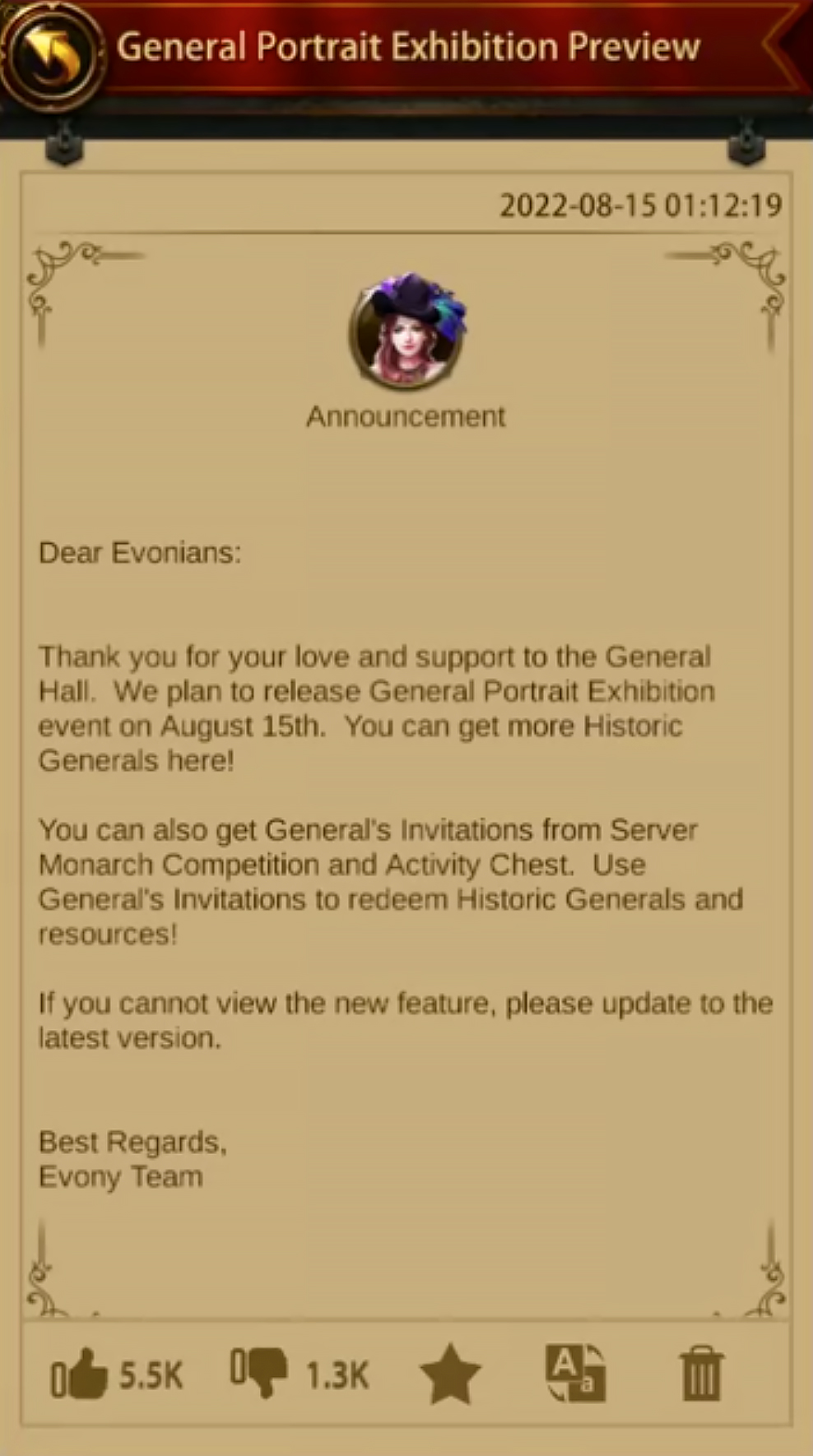 These invitations can be used to redeem Historic Generals and various resources. When the event is active, you will find it in the Valuable Event section instead of the Event Center.

In the General Portrait Exhibition event menu, gamers can purchase packages, but keep in mind that these packages can only be purchased with real- money.

You will also be able to redeem Generals by clicking on the “Redeem Generals” tab. Here, you can explore all the Generals that you can obtain. To redeem a General, you have to get a General’s Invitation.

Procuring a General’s Invitation can be a daunting task, as the activities that you need to participate in or complete can take some time. In the Activity menu, you can see different milestones and when you have reached a milestone, you will be rewarded.

The highest milestone is 145, and if you reach it, you will receive 6 General’s Invitations, amongst other items. In order to reach that milestone, players have to complete the tasks that are listed in the Activity menu.

Although there are many activities to complete, this method is considered the best way to obtain General’s Invitations. 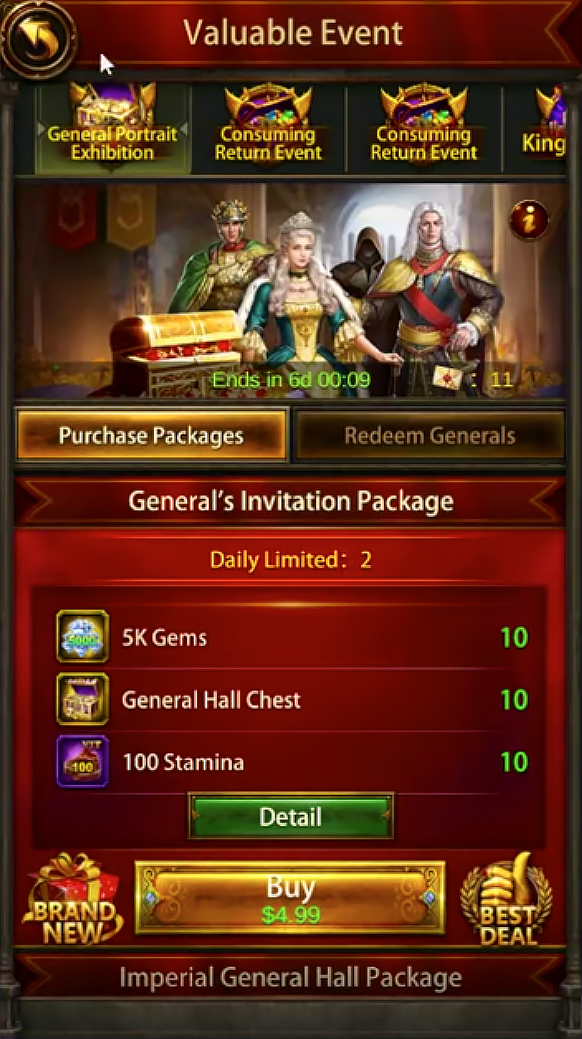 Generals that you can acquire

You will find all of the Generals that you can procure in exchange for General’s Invitations in the “Redeem Generals” tab. Bear in mind that you will not always be able to see which General you will get. The table below lists the type of General that you can redeem:

If you are interested in purchasing a specific General, you can do so in the “Redeem General” tab. For instance, players who want to recruit Historic General Phillip II can get him in exchange for 500 General’s Invitations.

Which Generals should you redeem?

Since there are countless General options, it can be confusing to know which General type you should redeem. With regard to the Common Historic General, it is advisable that you do not redeem them, unless you are going to use them for Ascension.

This is because the General Hall II Historic Generals are quite rare, and previously, players could only acquire them with real life money.

Can General’s Invitations be purchased?

As previously stated, Evony players can purchase an array of packages in the General Portrait Exhibition menu, though they can only be purchased with real money.

If you purchase the Imperial General Hall Package for $99.99, you will receive 500 General’s Invitations.

It is worth noting that it is not mandatory to purchase a package, as the General’s Invitations can also be farmed in the game.

However, if you are not interested in purchasing the package, you can click on the “Buy” tab and follow the given instructions to complete the purchase.