There are multiple vendors in Elden Ring that sell Sorceries in exchange for Runes, however, some spells can be quite expensive.

In this action role-playing game, Elden Ring, players can control a customisable character on a journey to repair the titular Elden Ring and to become the Elden Lord.

The game is primarily presented through a third-person perspective, and it enables you to freely explore a rich open world.

You can select a character class during the character-creation phase. Your character class determines your starting spells, equipment, and abilities. You can either fight enemies within melee range, or from a distance using ranged weapons or spells.

Although you will only have a few spells initially, you can purchase additional spells as you progress in the game.

Magic Spells are a returning feature that were experienced in previous Souls games, however, Elden Ring introduces some changes. With them, you can cast various magical spells to defend, attack, or enhance, depending on the battle situation.

There are 2 types of magical spell classifications in Elden Ring, namely, Incantations and Sorceries. Incantations include sacred holy magic that heals or repels the dead, or fire magic that draws power from the dragon communion.

Incantations are generally affected by your Faith attribute, while Sorceries scale with your character’s Intelligence attribute.

Elden Ring: Where to buy spells

Players can find spells throughout the game and from a variety of vendors. There are multiple merchants scattered around the Lands Between that will sell your Sorceries in exchange for Runes. Although these spells are generally basic, they can be particularly useful.

If you are in the early game phase, it is recommended that you purchase these spells as soon as possible: 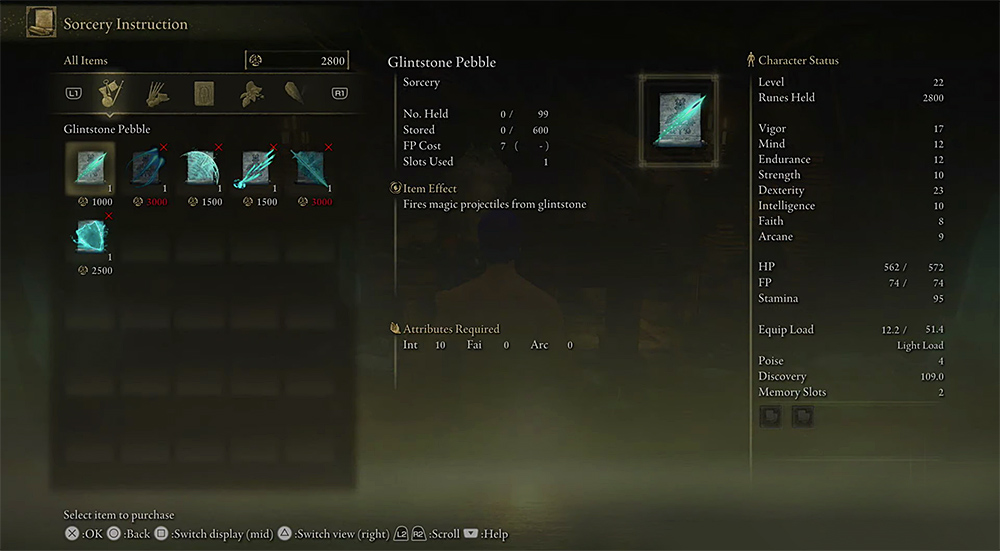 Gamers should note that vendors can only be found at specific locations. You can find Miriel at the Church of Vows, and Preceptor Seluvis is at Seluvis’ Rise, though you first have to complete his quest line before you can purchase spells.

Sorceress Sellen, on the other hand, can be found at the Waypoint Ruins in Limgrave, Thops can be found in the Church of Irith in Liurnia, and Gowry is located at Gowry’s Shack in Caelid.

How to acquire Runes

In order to procure Runes, players have to defeat the inhabitants of the Lands Between. Enemies sometimes have golden glowing eyes, which indicates that they will drop 5 times their usual quantity of Runes.

Bosses are also a substantial source of Runes. Defeating the strongest of foes rewards players with a bounty of Runes. Remembrances drop from certain bosses when they are defeated, and they can be consumed for runes or exchanged for powerful items.

Furthermore, Gold Rune Consumables are a reliable source of Runes. Similarly to other items, they are not lost on death, so players can store them and use them when they need a few more Runes.

What is the best early game spell?

The Rock Sling spell in Elden Ring is excellent in the early game phase, especially when it is paired with the meteorite staff. The spell summons 3 orbs that track the targeted enemy, which deals huge amounts of damage without costing too much FP.

To unlock this spell, go to Caelid and travel to the Street of Sages ruins., which can be found North East of the Astray from Caelid Highway North site of grace.

Once you are there, you have to go into the underground section of the ruins, where you will find the spell in a solitary chest.

Do you have to purchase all spells?

For instance, you can find the Stars of Ruin spell on the corpse of Primeval Sorcerer Lusat in Sellia Hideaway.