Fabled Wisp in Diablo Immortal is a new resource that is used to craft set items, though it can only be acquired by salvaging set items.

In Diablo Immortal, players can uncover the untold history of what took place between Diablo II and Diablo II. The mobile version of the game is quite similar to its predecessors, as you can experience the Sanctuary like never before.

When you first create a character, he or she will be equipped with basic gear. Gamers can procure additional gear by advancing in the main story line.

You will need stronger gear and weapons as you reach higher levels, as the content of the game will become progressively more difficult.

In the past, players had to farm dungeons repeatedly to acquire set items. However, Blizzard, the game’s developer, recently announced that players can now craft set items, but this requires a new resource, Fabled Wisp.

Blizzard introduces new features to Diablo Immortal through game updates. They recently announced that players can craft certain set items at Charsi’s forge in Westmarch. However, to craft these items, you need to get Fabled Wisps.

The developer revealed that they have been listening to players’ feedback and have concluded that most players are having a difficult time procuring specific items. They believe that adding the feature to craft items will give players the opportunity to complete their sets.

This means that you no longer have to farm the same dungeons over and over in the hopes that a specific item will drop.

Blizzard announced on 8 November 2022 that the first round of Server Merges will happen. They also revealed the most welcome changes to the game – the ability to craft a set gear.

In order to craft a certain set gear, players have to acquire Fabled Wisps, which is a new resource. Each set item requires 5 Fabled Wisps and 1 Glowing Shard to craft.

Players can get Fabled Wisps by salvaging their set items. However, only set items that are acquired from dungeon bosses and Heavy Austere Chests after the maintenance update can be salvaged for these new resources. 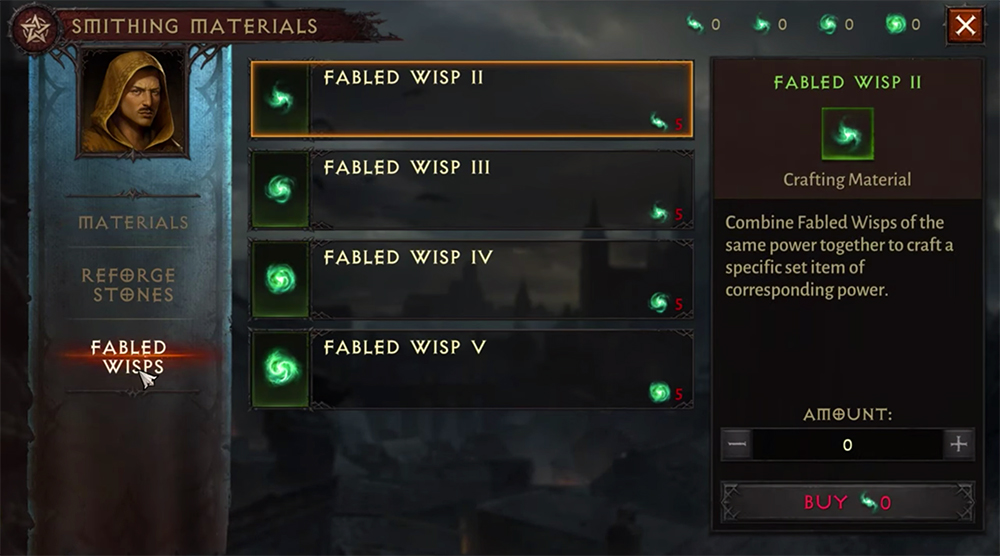 In other words, you cannot go and salvage all the set items that you have acquired previously for Fabled Wisps.

Unfortunately, you have to farm some dungeons multiple times to salvage the items to acquire Fabled Wisps.

Once you have done this, you can go to Charsi’s Forge in Westmarch and use it to craft set items of your choosing. The non-player character has a new option called “Set Crafting,” and by clicking on it, you can select the set item from a dropdown menu that you wish to craft.

The only issue that you may encounter when crafting set items is that there is a Hell difficulty restriction. Players cannot craft a Hell V level set item from Fabled Wisps earned by salvaging, for instance, a Hell I Set item.

In order to craft a Hell V Set item, you need to salvage Hell V set items that you earned after the maintenance item to craft it alongside a Glowing Shard.

Why are you not getting your Fabled Wisps?

Some players have revealed that they did not receive their Fabled Wisps after salvaging some of their set items. The main reason for this is that they salvaged items that they earned before the maintenance update.

Although the feature is in place, you will not get Fabled Wisps for items that you obtained before 9 November 2022. Instead, you will get Scrap Materials, Enchanted Dust, and Glowing Shards.

However, if you salvage an item that you earned after 9 November 2022, you are guaranteed to earn Fabled Wisps.

Can only set items be salvaged for Fabled Wisps?

Unfortunately, only the Set items in Diablo Immortal can be salvaged for Fabled Wisps. These items are the highest-tier items that you can procure, but you can only claim them when you have reached the maximum character level.

This principle makes farming set items quite difficult, as they are reserved for endgame players.

If you are not the highest character level yet, it is recommended that you focus on earning experience points and completing quests to increase your character’s level so that you can enjoy the Set Crafting feature.

How to farm Fabled Wisps

As previously stated, you have to complete multiple dungeons in the hopes of a set item dropping. The best method to use to farm Fabled Wisps is to check which dungeons have a bonus chance of dropping set items daily.

It is advisable that you run that dungeon with a group as quickly as possible, and at the highest difficulty that you can complete easily. This method should work well, as it does not matter which set items you get, since you are only farming them to get Fabled Wisps.