The Ancestral Tableau in Diablo Immortal can hold up to 8 Ancestral Weapons to provide Warband members with additional Attributes.

Players can battle ancient enemies and discover the untold story about what took place between Diablo II and Diablo III in this mobile game, Diablo Immortal.

It is part of the well-renowned video game franchise, Diablo, which means that you are likely to experience similar features throughout the series.

Diablo Immortal’s developer, Blizzard, occasionally introduces new features and activities into the game to keep players motivated and engaged in the game.

Warband members can also farm Ancestral Weapons, which can be slotted into the Ancestral Tableau to yield various benefits.

How to join a Warband

In order to enjoy Warband-exclusive features and activities, you have to be part of a Warband. You can either create a Warband or apply to become a member of an existing Warband.

In order to become part of a Warband, open your main menu and select the “Warband” tab. Here you can find a list of available Warbands to join. Keep in mind that you have to apply to become a member of a specific Warband.

Alternatively, you can create a Warband by selecting the create option. You have to select the Warband’s objectives and active time. Moreover, you have to give your Warband a name and a description.

If you are creating a Warband, it is important to know that you will be the Warband’s leader. However, if you join an existing Warband, the person who established the group will be the leader.

In the past, every Warband in Diablo Immortal had a Warband Camp, which served as the group’s home. However, Blizzard recently announced that Castle Cyrangar will replace Warband Camps and will thus be Warband’s new home.

Before you can move into your Warband’s castle, you must complete a quest and defeat the monsters that inhabited the stronghold. Once you have settled in, you can enjoy Warband rooms as well as 2 new gaming modes called Purge the Depths and Defense of Cyrangar.

At the heart of the castle, you will find the Ancestral Tableau, which can hold up to 8 Ancestral Weapons. Players can procure Ancestral Weapons anywhere in Sanctuary, as these weapons have the highest drop chance in the 2 new gaming modes.

Once you have an Ancestral Weapon, you can slot it into the Ancestral Tableau to get a portion of its Attributes. Each Ancestral Weapon that you slot will give all Warband members additional Strength, Vitality, and Intelligence.

To upgrade the Ancestral Tableau, you have to collect Warband Activity Points by enjoying Warband activities. 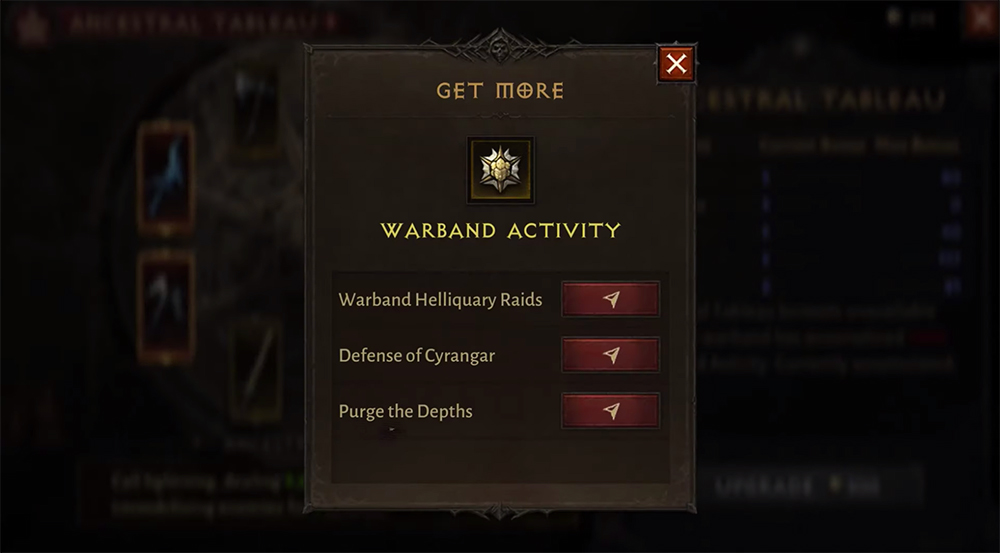 The easiest method by which to acquire Warband Activity points is completing Warband Helliquary Raids. However, you can also participate in the Defense of Cyrangar and Purge the Depths gaming modes to earn activity points.

Since the Helliquary Raids is a Warband-exclusive activity, it requires a party of 8 people to complete it. It is worth noting that the Demonic Portal to the raids only unlocks when your character has reached level 36.

When the activity becomes available, you can talk to Deckard Cain and meet Rayek in his workshop. Interacting with the non-player characters will begin a new questline. Progressing through the objectives of the quest naturally starts your first Helliquary raid.

After completing the quest, the Helliquary opens permanently and you can defeat enemies with your Warband to earn rewards.

Do the Ancestral Tableau bonuses affect your combat rating?

It is crucial to note that the bonuses that the Ancestral Tableau provide increase your character’s combat rating.

Combat rating considers your gear, abilities, and weapons to give you a quick indicator of whether you are ready to fight the next boss on your list or not. The higher your combat rating is, the more bosses you can defeat.

Therefore, it is advisable that you upgrade your Ancestral Tableau as soon as possible to receive additional combat ratings.

Which weapons can you slot into the Ancestral Tableau?

Generally, Ancestral Weapons have a unique background that other weapons do not have. However, you can scroll on a weapon’s info page to see whether it has the Ancestral Property or not.

Each Warband member can only slot 1 weapon into the Ancestral Tableau. You can remove and replace your Ancestral Weapon at any time.