Players are able to purchase the Piggy Bank in Coin Master once it has collected enough spins, however, the Piggy Bank can only be purchased with real-life money.

Coin Master is a popular single-player, free casual mobile game developed and published by Moon Active. Even though the game falls into the Adventure Game category, it uses gambling mechanics. Players need to win coins to upgrade items in order to build up villages. To obtain coins, players need to spin a slot machine.

It is important to note that the number of spins is limited to seven per hour, however, additional spins and items can be purchased in chests. Players can also obtain free spins by subscribing to Coin Master’s email newsletter, and through links on its social media channels. Additionally, there are various websites that collect these links to make it easy for players to have access to all the free rewards.

How to obtain fortune

How to unlock levels

Coin Master players are able to advance to the next village once their village is completely built. The levels get more challenging as the player progresses through the game. The game currently has 365 levels for players to complete.

Each village features a unique theme, such as Los Angeles (LA) dreams, Hell’s village and Buddhist village among others. Villages have five items, which can include pets, homes, characters, transportation and items from nature.

To complete a village, players need to obtain coins. It is important to note that every next village is more expensive than the one before. The first village costs approximately one million coins, while village 283 costs more than one trillion coins. Luckily, players are able to lower the cost of a village by building items during the Village Mania event.

When players unlock a new village, they will be introduced to new characters. The game also features other mythological characters, including warriors, witches, wizards and queens among others. Players can obtain three types of pets, Foxy, Tiger and Rhino. These pets are designed to help the players collect more coins in their own way.

Players are able to raise their pet by giving them treats. The pet’s experience points can also be increased by using experience potions. It is important to note that each pet offers the players unique features. Tiger gives players extra coins for each attack, while Foxy gives players extra coins for a raid up to 107 percent of the raid value. However, Rhino protects player’s village from attacks.

Coin Master is based on the slot machine mechanism. This means that if the players want to play the game, they need to obtain spins. Luckily, players receive up to 110 free spins every day. Players can obtain more spins by inviting Facebook friends to join the game, sending gifts to friends, watching in-game video advertisement and levelling up the villages. 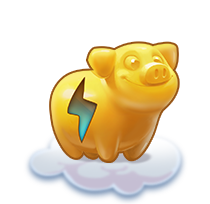 Players should remember that the higher they bet, the more spins will be added to their Piggy Bank. It is important to note that when players are ready to claim the spins, they need to purchase the Piggy Bank with real-life money. After making the purchase, players can give the Piggy Bank a smash to obtain the spins. Players will receive a new Piggy Bank once the old one has been cracked open.

It is also important to note that the Piggy Bank has a Spin Limit. This means that once it has reached full capacity, it will stop collecting spins until players purchase it. Players can see how many spins the Piggy Bank has collected by clicking on it.

It is believed that the Piggy Bank’s price depends on the village players are building. This means that players might have to pay more to unlock their Piggy Bank if they have reached a higher-level village.

Coin Master is a popular free mobile game based on gambling mechanics. In the game, players need to win coins by upgrade items in order to build up various villages. Players can obtain coins by spinning a slot machine. However, players are limited to seven spins per hour.

The game features a Piggy Bank system, which collects spins every time players land on specific items. Once the Piggy Bank has reached full capacity, players are able to purchase their Piggy Bank using real-life money to claim the spins. It is also believed that the cost of the Piggy Bank depends on the player’s village level.