Axie Infinity is a popular non-fungible token video game. This means that players can earn Ethereum-based cryptocurrencies, Smooth Love Potions (SLP) and Axie Infinity Shards (ASX). Since it is Ethereum-based, players are able to convert the cryptocurrencies into real world money. The game has thus become a great source of income for some players.

The game allows players to buy, breed, raise, collect and battle with creatures called Axies. However, it is important to note that players need to obtain three Axies before they can start playing Axie Infinity. Players can also buy Axies on the official marketplace website using real-life money.

In this guide, players will discover how to get better at the Arena Mode, and in return, obtain more Smooth Love Potions.

In Axie Infinity, there are currently nine classes, which are divided into three groups. It is important to note that the groups counter each other. The triangle indicates that Plant, Reptile and Dusk deals 15 percent more damage to Bird, Dawn and Aquatic classes. That class then deals damage to Beast, Bug and Mech classes. It is important that players ensure they understand and know the class counters before entering the Arena Mode. 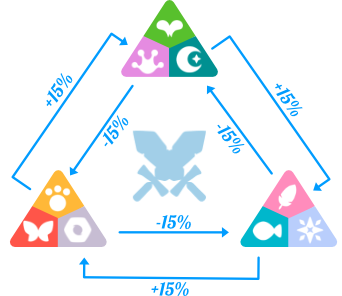 It is crucial to know how much damage output the player’s cards have in each class, as well as the potential damage of the opponents. Luckily for players, there are various formulas available to calculate the damage. These formulas make it very easy, especially when it comes to the Morale and Skill statistics. It is important to note that players will not be able to use the formulas while in battle, so they need to have a rough idea of which cards deal the most damage in the various classes.

It is also recommended that players use a Word document to note the damage of each card. In some sense, players have a cheat sheet to start off with. However, as time goes on, players will learn the damage the cards deal by heart.

Once players enter a battle, they will be able to select their Axie team. Players will also be able to edit their Axies. In the ‘Edit’ menu, players can replace Axies, choose cards and change the Axies’ positioning. It is recommended that players position their Axies in a horizontal row. However, the front Axie should be placed a bit underneath the middle and last Axie. The Axies will then have a 50/50 chance of hitting the top or bottom enemy Axie.

Arena Mode matches feature a lot of mechanics that players need to know before participating. One of the most important mechanics is Last Stand. This occurs when an Axie receives a fatal blow, they have a chance to enter the Last Stand. If an Axie is in Last Stand, they will be able to play a few more cards until the bar disappears.

There are two factors when accounting for the Last Stand; excess damage and morale. Players are able to calculate the morale and excess damage by using specific formulas:

It is important to note that some cards have an effect on the Last Stand, including Hero’s Bane, Nitro Leap, Puffy Smack and Scale Dart, among many others.

If a player badly manages their Energy, they will have to sacrifice one of their Axies. It is thus important that players pay attention to their Energy management.

Speed is a crucial aspect, especially in the one-versus-one or two-versus-two scenarios. The Bird class has the maximum speed of all the classes, while the Aquatic class falls second. However, there are cards that can improve the Axies’ speed or reduce the opponent’s speed. Speed is important, as it determines how quick, or slow, the player’s Axies will attack the opponent’s Axies.

In addition to the above-mentioned factors, players should also focus on the buffs and debuffs, card combinations and split damage. These factors can all contribute to the player’s success in the Arena Mode.