The Aquatic class in Axie Infinity is one of the strongest, however, players should still create a double Aqua team with a powerful Plant Tank as the first liner.

Axie Infinity is a popular Pokémon-inspired game where players can collect, trade, breed, raise battle and build a kingdom with their in-game pets called Axies. They are fierce creatures that love to build, battle and hunt for treasure. Players are able to build up a collection of Axies and use them in an ever-lasting universe.

It is important to note that Axie Infinity is a non-fungible token game. This means that players are able to earn Ethereum based cryptocurrencies, Smooth Love Potions (SLP) and Axie Infinity Shards (AXS). Players are thus able to exchange their in-game currencies to real-life money.

In order to start playing the game, players need to purchase three Axies with real-life money on the Axie Marketplace. Players cannot play the game if they do not have at least three Axies in their collection. Players are able to improve their Axies by equipping them with various cards. Each Axie can be equipped with a maximum of four cards.

Axie Infinity currently has over 100 cards for players to choose from. However, the cards are divided into six distinct classes: Bird, Bug, Beast, Aqua, Plant and Reptile. Each class is then divided into different body parts, such as mouth, eyes, ears and horn among others. Since each card has unique abilities, it is important that players know which Axie should be equipped with which cards.

Fortunately, experienced players and professional gamers have created multiple builds and posted them online to help players with their cards and Axies. One of the best classes in Axie Infinity is the Aquatic class. However, building the perfect Aqua Axie can seem complicated.

For the backliner, players should use a Koi-based Aqua Axie. Purchasing such as Axie might be necessary to continue with the build. It is crucial to the build that the Axie has the Koi feature. When looking at a non-zero build, players can buy an Axie for between 0.1089 Ethereum and 0.1093 Ethereum.

It is also important to note that the initial investment can be very expensive. However, players will obtain SLP and AXS while they are progressing through Axie Infinity. This means that players will be able to gain their money back. 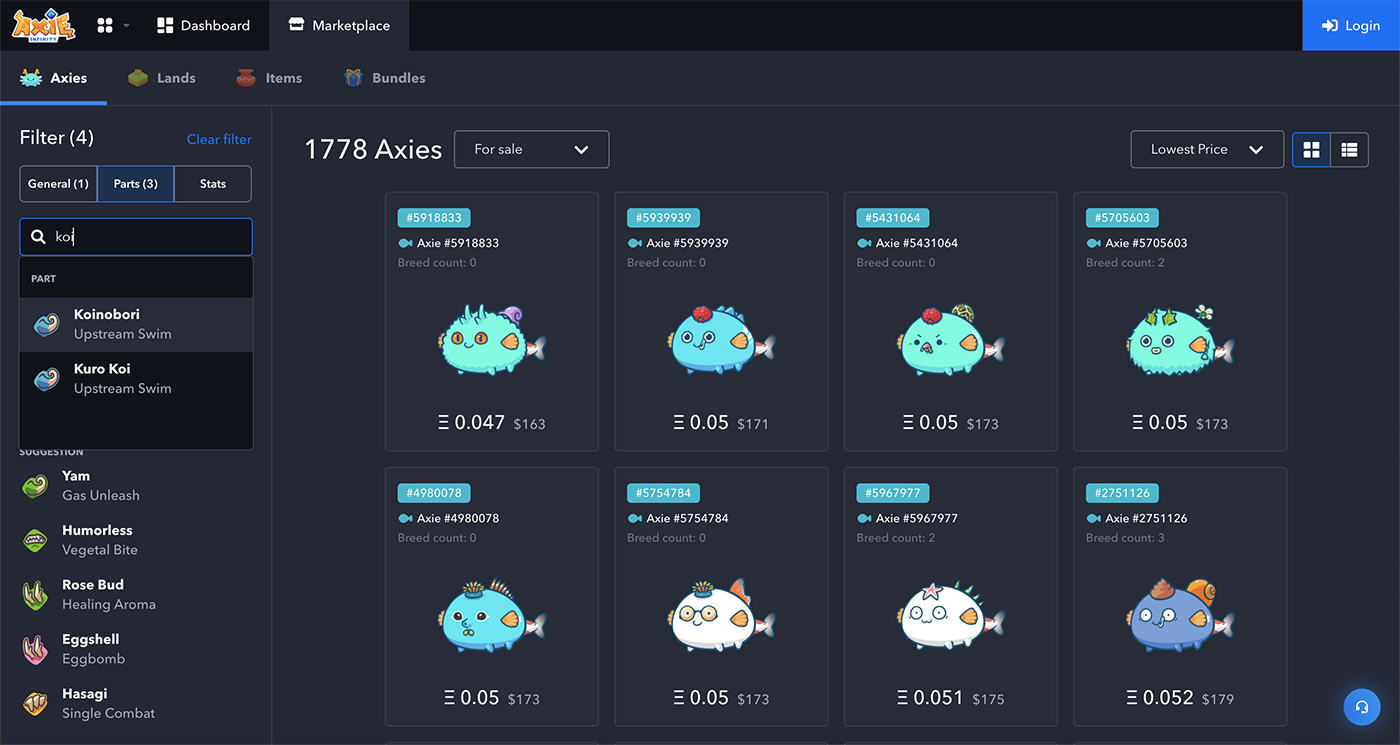 Players also need to purchase Axies that feature specific cards and moves. Players need to look for an Axie with a range move, and perhaps a Lam on the Axie’s mouth. Lam is important to the build, as it offers 40 percent shield and a 20 percent damage bonus if the Axie is below 50 percent health.

It is advised that players equip or purchase the Axie that has the Goldfish feature. However, it is not mandatory. Goldfish will aid the Axie when the opponent has a speed reduction card equipped.

For the mid-liner, players should always use an Nimo Aquatic Axie. Nimo provides the Axie with additional energy. It is recommended that players select an Axie that has a move with a high shield percentage. This will enable the player to slow down the game in order to survive for longer.

Players want to select an Axie that is equipped with the Sponge card on its back. However, this card can be very expensive as it is rare. Additionally, players can use the Babylonia card. This card is much more affordable but features similar abilities. It provides the Axie with a 50 percent shield while dealing some damage.

The other two cards for the mid-liner should ideally feature high damage dealing moves. For example, players can equip the Axie with the Piranha and Goldfish cards in order to do damage.

If players want to purchase a mid-liner, they will pay approximately between 0.0854 Ethereum and 0.0988 Ethereum. However, it is important to note that it is not mandatory to purchase new Axies for this build.

Players should ideally place a phenomenal Plant Tank with Hott Butt as the front-liner. The Tank should be equipped with October Treat, Vegetal Bite, Prickly Trap and Spicy Surprise. This Tank will also fit best with the double Aqua build, as it is able to deal a lot of damage.

One of the best classes in Axie Infinity is the Aquatic class. It is recommended that players use a double Aquatic set up when creating a new team. This means that the team will feature two Aqua Axies, each with distinct cards.

The team will be nearly impossible to defeat when paired with a powerful Plant Tank. However, purchasing these Axies can be very expensive. Luckily, players can use the zero-cost builds as an alternative.