The pity system in Anime Adventures guarantees a Mythical or a Legendary character once you have reached a specific percentage, however, the system resets every hour.

You are invited to collect well-renowned anime characters in this exhilarating tower defence video game, Anime Adventures. The game’s official description reveals that various anime worlds have collided and brought all the heroes and villains together.

Players now have to allocate their units to defeat enemies and to prevent them from reaching your base.

Before you can participate in the tower defence battles, you must get Anime heroes and villains. Anime Adventures has a gacha system which allows you to collect additional heroes.

It is important to note that some characters are rarer than others, but fortunately, there is a pity system in the game.

Every character in Anime Adventures has an equal chance of being obtained from a Summon according to their rarity. This means that some characters are more difficult to acquire than clothes. The table below lists each rarity and their summoning chances:

Secret and Mythic characters are known to be extremely rare. When someone summons a Mythic or Secret character, it is announced in the global Roblox chat.

Players can increase the drop rate of their characters by consuming a Luck Potion, which they can purchase in the game.

Summon is an area in the lobby where gamers can procure powerful characters. It is located to the left of the leaderboard. The characters available for summoning change during the day. It is thus recommended that you keep an eye out for which characters are available. 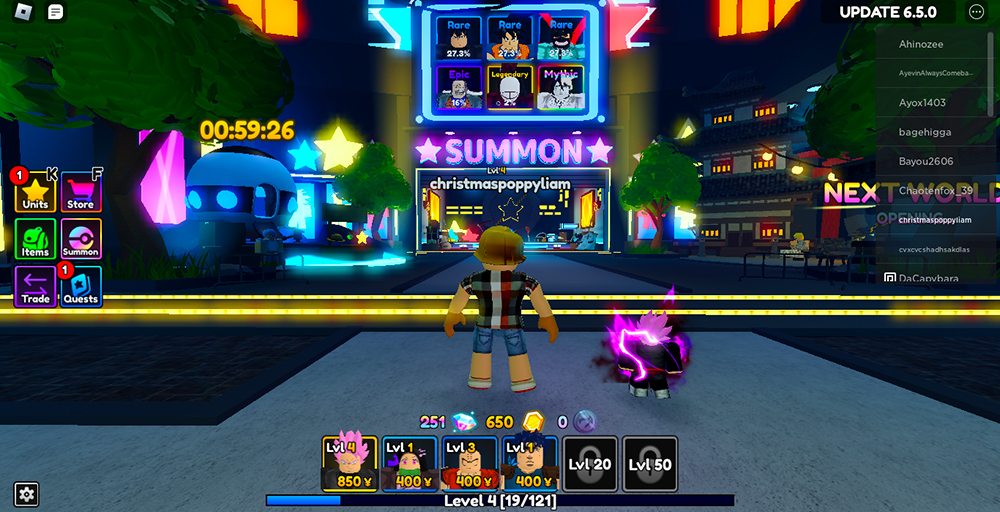 Each summon costs approximately 50 gems, though you can also use a Summoning Ticket. Every hour the banner will be refreshed with random units, which comprise 3 Rare, 1 Epic,1 Legendary, and 1 Mythic.

When summoning, players will build up Pity. For each summon, you accumulate 2 percent Legendary Pity, 2500 Gems, and 0.25 Mythic Pity, 20 000 Gems. Once you have 100 percent pity, you are guaranteed a character from the corresponding rarity.

It is vital to note that Mythic Pity is not visible, which means that you cannot track the progress of your collection. However, players can track their Legendary Pity.

If you summon a Legendary or Mythic character at any point whilst summoning, it will reset the corresponding Pity back to the default 0 percent.

Bear in mind that the pity will also rest when the banner has refreshed. In other words, you have an hour to build up 100 percent pity so that you can receive a Legendary or a Mythic character.

How to get Gems

Gems are the in-game currency that can be used to purchase items and to summon additional characters. There are many methods that you can use to acquire gems, such as completing the daily story and event quests.

However, you can also get gems as a reward for completing the daily wave infinite mode. Moreover, you can complete story mode stages and challenges.

Players will allegedly also receive gems by replaying story mode levels and challenges. You can also farm gems by going into the time machine, however, this is an away-from-keyboard method for acquiring gems.

As previously stated, you can increase your chances of procuring a rare character by consuming boosts. There are various boosts available, which are outlined in the following table:

What are banner tiers?

Banner tiers are a mechanic that prevents new players from rolling for certain types of units. This was introduced to ensure that endgame players cannot create new accounts to pull stronger and better units.

The table below lists the tiers, the player levels, and descriptions of each: