The latest addition to the five-star list in Alchemy Stars is Genevieve, who forms part of the Fire element and takes on the role of a Converter.

After 17 years, players have finally returned to the surface in Alchemy Stars. Waiting for the players was an irreversible tragedy and the newfound bonds with Aurorians. The game invites players to command the Colossus, travel through the capital, and soar over the ancient ruins to find the Light.

The gacha-based mobile game is set in Astra. Players need to aid the Aurorians defeat invading creatures called Eclipsites. To enter battle, players first need to create teams of five Aurorians. Each Aurorian is based on one of the four elements and features unique abilities.

During the turn-based combat stages, players are able to guide their characters along paths of as many connected tiles of the same element as possible. The characters’ attack power increases depending on the path length. Characters are also able to activate abilities in order to influence the battlefield, tile-changing, teleporting and healing.

One of the latest additions to the five-star list is Genevieve. She is a fearsome Bounty Hunter of the True Order, with a hint of elegance. Genevieve is described as lively, elegant and she also enjoys a glass of gin. She is building an intelligence network to track down a certain individual. Genevieve forms part of the Fire element and takes on the role of a Converter. However, she lacks the ability to convert tiles. 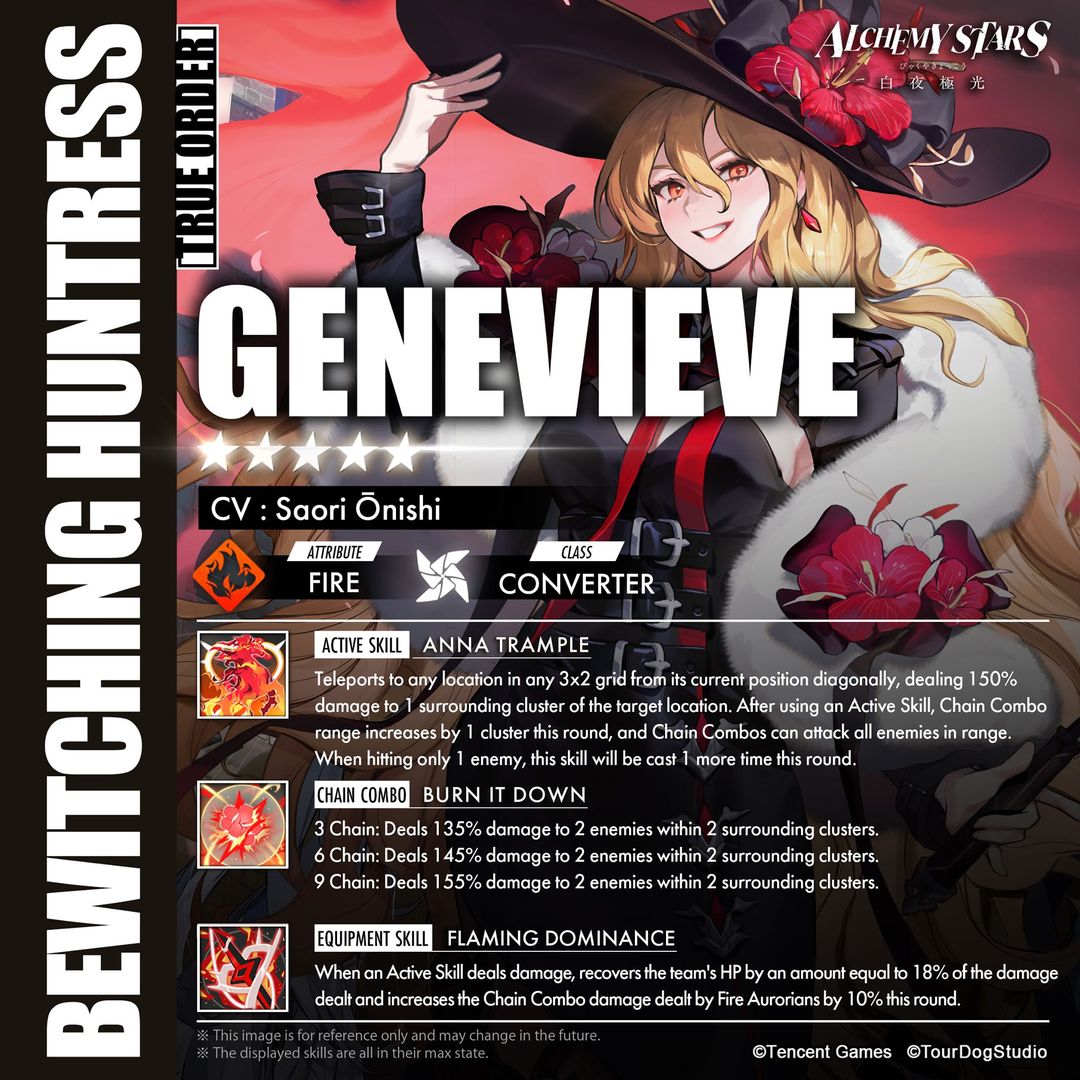 Genevieve can be a crucial unit in any team due to her unique abilities and skills. It is important to note that Genevieve’s cooldown skill is pre-emptive. The following table lists Genevieve’s skills, as well as the description of each skill.

Players can use Genevieve in any team. However, it is recommended that they use her in a team with Alice, Jona, Istvan and Eicy. Alice is crucial to any team, as she features healing abilities. Additionally, she offers her teammates a damage reduction. On the other hand, Jona allows the player to reduce combo requirements. This means that players can obtain an additional 10 percent damage.

Istvan has the ability to double up on the convert and combo attacks. This allows the player to do multiple additional damage with Genevieve. Similar to Alice, Eicy also has the ability to heal her teammates. However, she is able to do a colour conversion on the tiles.

In combat, players should try to teleport Genevieve to a location where Eicy can manipulate the tiles and convert them into red tiles. This will allow Eicy to be more useful and also get more conversion than she normally would.

When will Genevieve be available in-game?

Geneveive will be available for players to obtain during the event, Ocean Sovereign. It is important to note that the event is divided into two parts. Each part features new content and new heroes along and their stories. The first part of the event launched on 19 August 2021, while the second part commenced on 9 September 2021. Ocean Sovereign will conclude on Tuesday, 14 September 2021.

During the event, players will be able to purchase unique items at the store, complete limited-time quests and experience new story stages. However, players need to clear stages one to 16 of the main storyline in order to access the new stages.

How to obtain Genevieve

Players will be able to obtain Genvieve through the in-game gacha system. It is important to note that this may become an expensive process as players may need to spend all their in-game money to obtain her. However, it is certainly worth it to obtain Genevieve.