Alchemy Stars’ most recent event, Ocean Sovereign, introduced new content, quests and characters, one of which is Fleur, who is a six-star Water Sniper unit.

Alchemy Stars is a popular role-playing gacha mobile game. The game allows players to travel to the world of Astra. Players take on the role of a survivor of the Caelestite race, who helps the Aurorians defeat invading creatures called Eclipsites. In the game, players are able to build teams of five characters, known as Aurorians. Each Aurorian is associated with one of the four elements and possesses unique abilities.

In the turn-based combat stages, players are able to guide their characters along paths of as many connected tiles of the same element as possible. The characters’ attack powers are able to increase, however, it depends on the path length. Characters are also able to activate abilities in order to influence the battlefield, such as healing, changing tile elements and teleporting.

The game’s most recent event, Ocean Sovereign, introduced new heroes, a new story and lots of free items. Players will also be able to obtain new exclusive summer-themed skins for Vice Uriah, Eicy and Kleken, among others.

During the event, players were able to purchase the new Special Event Book. This is considered to be a Battle Pass system, where players have to complete several quests and rank up their level to obtain rewards. If players chose to buy the Battle Pass with real money, they will receive additional rewards.

As mentioned above, the event introduced new heroes, including Beryl, Bonacie, Fleur and Pasola. All the heroes are available to collect in-game, with Bonacie being the free five-star hero. However, players need to complete various quests to gather event points and then exchange the points for Bonacie in the exchange shop.

It is believed that Fleur is a good-natured Rediesel Wrench technician. He is a genius at repairing all kinds of machinery. However, Fleur also strives to build his own robotics. He has a lot of unique skills and abilities, since he is a Water attribute, Sniper character. Players should remember that Fleur is a six-star unit, which means that it can be difficult to obtain him. 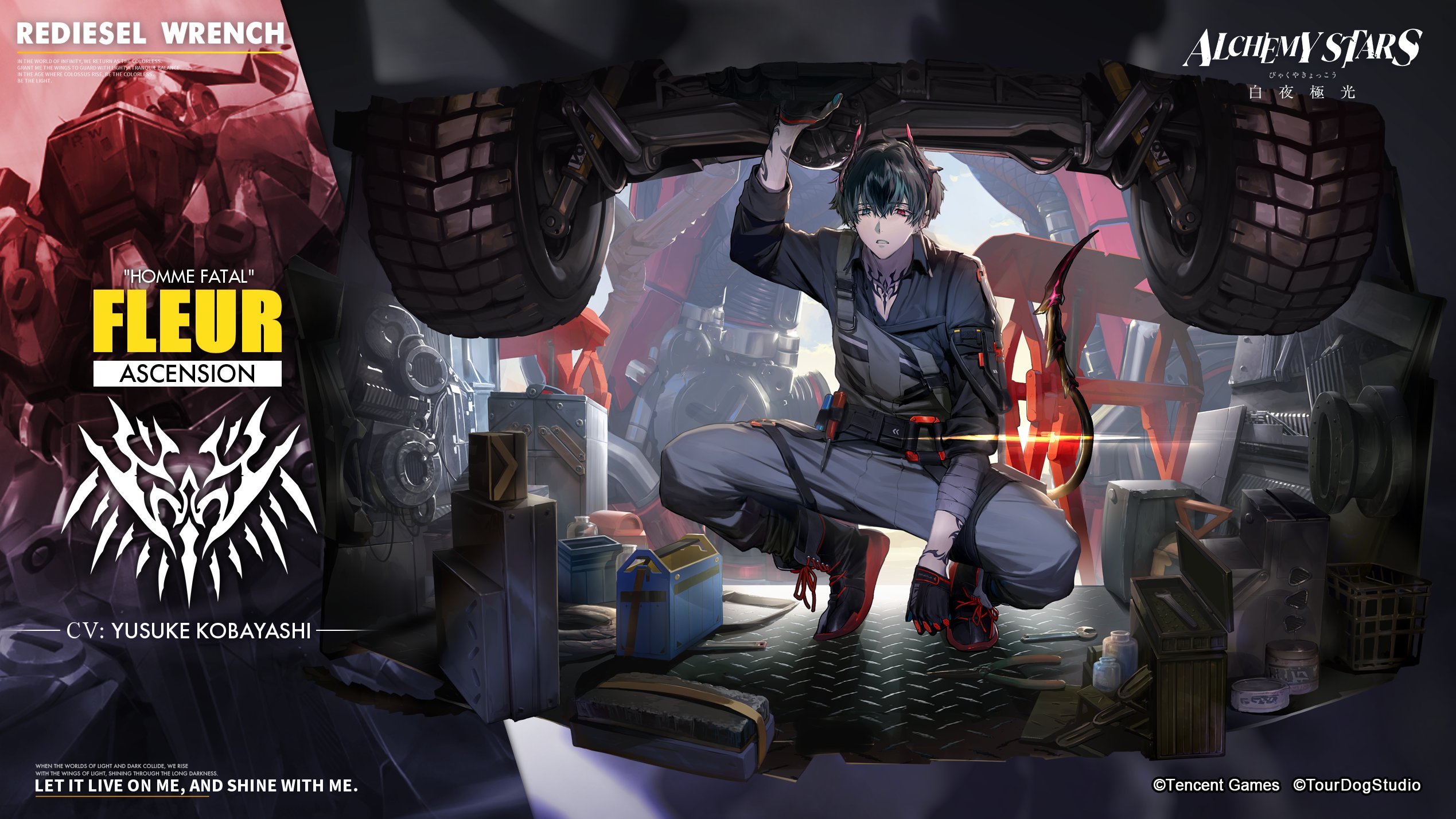 It is important to note that Fleur has a variety of skills. The following table indicates the name and description of his work skills:

Fleur’s active skill, Tool Barrage, selects one enemy and deals 200 percent damage to it while marking it. He deals damage to marked targets at one additional time when using Chain Combinations in the same round. It is important to note that this skill changes as it levels up. 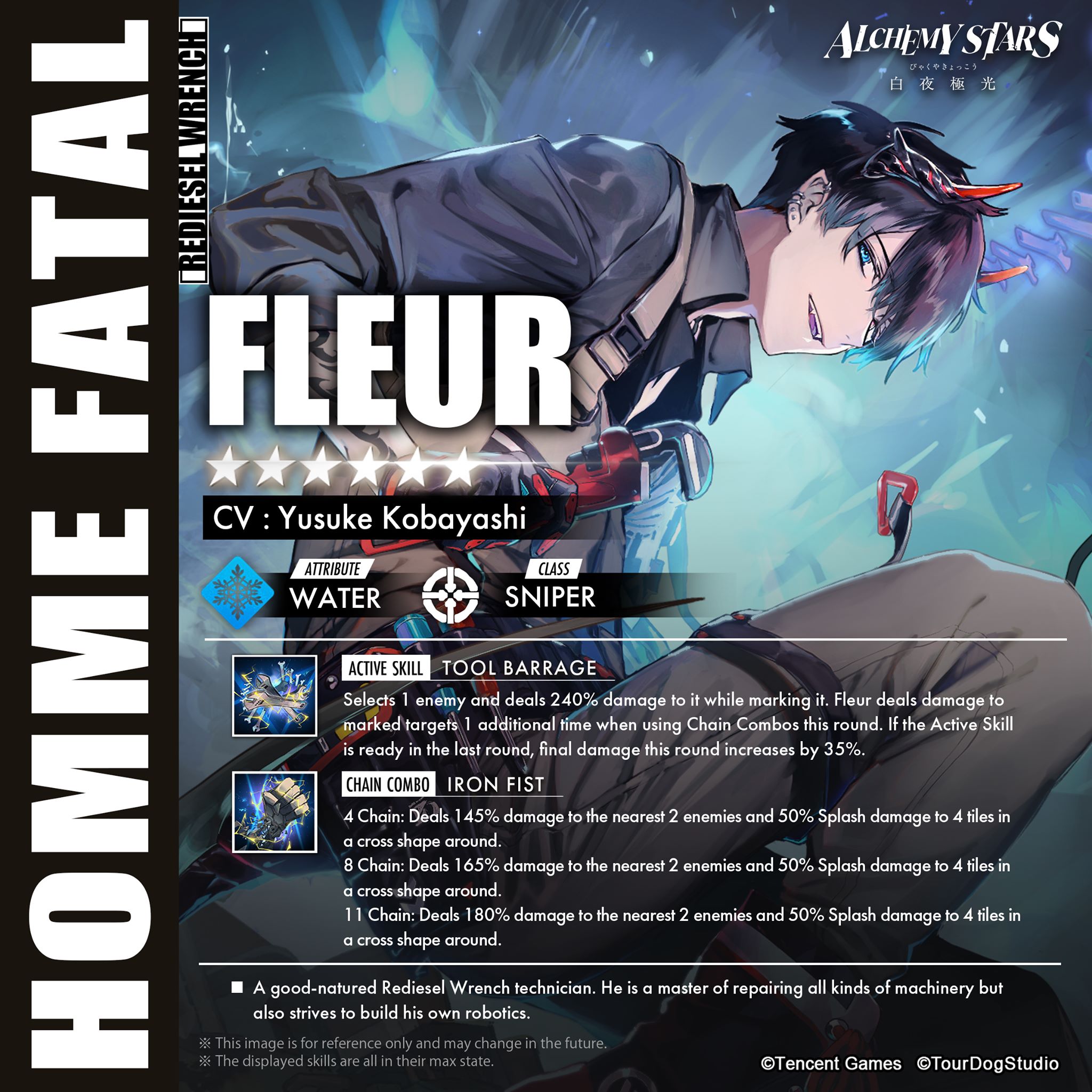 With regard to the equipment skill, Handyman, all damage Fleur deals to enemies with less than 40 percent of their maximum health is increased by three percent. However, the damage increases as the skill levels up.

It is important to note that the statistics for Ascension three, level one and level 80 are unclear.

Alchemy Stars is a popular gacha-based mobile game. It invites players to take on the role of a survivor of the Caelestite race, who helps the Aurorians defeat invading creatures. Players can build teams of five characters to take on various enemies.

One of the characters players can collect is Fleur. He is a good-natured Rediesel Wrench technician and forms part of the Water attribute, Sniper Roles. Players should remember that Fleur is a six-star unit, which means that it may take some time to obtain him.